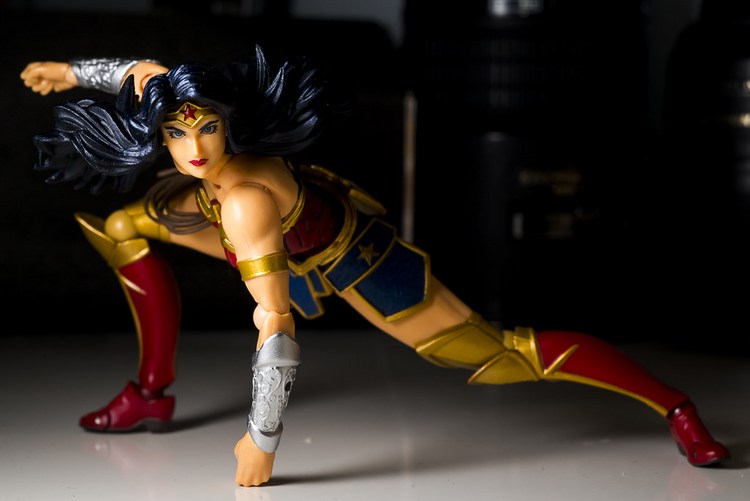 It's basically raining new figures here (something only 2020 could make happen), so without further ado, here's the second one, the Figure Complex Wonder Woman figure. The Figure Complex series is part of the Kaiyodo Revoltech series. Since it's inception a few years ago (2017 I think), several DC and Marvel heroes have been featured. The intent of the line is to have stylized figures that look mindblowing when posed dynamically.. and if it looks nice when standing up straight, its a bonus. Of the three females released thus far, I have two of them - Psylocke and Wonder Woman. I liked the Psylocke well enough, with the exception of her overall facial paint work, which due to the pale skin made her look like a blowup doll and some serious thigh gap issues. So how did Diana fare? Wonder Woman is based on the comic art design shown on the inner liner of the box. She comes with what I'd expect a Wonder Woman figure to come with. You get the figure, three total face plates (smiling, neutral, shouting), uncoiled Lasso of Truth, bullet deflect effects for each arm, energy blast blocking effect for each arm, her cape, an extra neck piece for use with the cape, her shield, her sword. six additional hands for weapon holding and posing, and a stand. Retail price on this was 8,250 Yen as compared to Psylocke at 6,458 Yen back in 2018. Of the three portraits, the neutral one was my favourite. The other two had their share of strengths and issues. Compared to the proto photographs, the final product seemed to be intact, with the only real change I could tell was that the various metallic paints were not as reflective. A quick comparison between Psylocke and Wonder Woman shows that Kaiyodo addressed the issue of the thigh gaps, which were horrible on Psylocke. Wonder Woman is also a bit larger and much more complex looking than Psylocke, which partially explains the price jump. On a side note, the hair, which was great on Psylocke, is equally well done on Wonder Woman. Details on her outfit seem a bit soft to my eyes. I'm not sure if that's an issue with the plastic, or the actual sculpt, but I've seen finer details and more prominent line work on the various Gal Gadot Wonder Woman figures in my collection. From a static posing perspective, the only real sore points would be the shoulders and the neck. It all ties back to the articulation for this figure. The long neck, when the head is seated properly, isn't really an issue, and becomes even less of an issue when she's wearing her cape. The reason she has such a long neck is because there is a joint at the base of her head that allows the figure to almost fully tilt the head straight up, very useful when you're posing a flying character or any pose where the head goes first. The shoulders can be an eyesore. Effectively her shoulders can be dislocated from her body to reveal the double ended Revolver joint beneath. The trade off, however, is that you have incredible range of motion, with this figure probably having the easiest time pulling off Wonder Woman's trademark Bracer pose. Other points of articulation on the body include toe, ankles, double jointed knees, thigh twist, hips, waist, mid torso, double jointed shoulders, single jointed elbows, wrist, neck head, and hair. One additional feature that you don't see very often on figures of this size are that the eyeballs can be pointed in whatever direction you want, further completing any dynamic poses you're working on. Paint work has never really been the strongest point of these figures. Having said that, the quality of the work on Wonder Woman is definitely better than on Psylocke. Base paints are smooth. Despite having more masking required, the overall figure appears to be crisper looking than Psylocke, though not as crisp as on other Japanese figures. To me, it appears the paint app on the lips of the neutral and smiling sculpts are sharper than on Psylocke, which combined with an actual complexion results in a superior effect, though her skin remains plain plastic only.. The shouting face... well lets say open mouths often result in mixed results, and this is no exception. Build quality is something that has not been an issue ever since these Figure Complex releases became the Revoltechs I handle. No issues with limb sizes, weak joints, or my biggest nuisance, getting the damn limbs to line up because the "clicks" of the Revolver joints were out sync. Everything flows smoothly, and QC is not an issue with regards to things falling apart, or not coming together as it should. Finish on the plastic pretty good.. you'll find the odd rough spot here and there (most notable on the edges of things) and some visible seamlines. That pretty much sums up the experience. Not being a movie figure, it doesn't have to live up to looking like Gal Gadot. Does it look like the comic art? For the most part yes, just not the sculpt, but these sort of things happen all the time when dealing with comic art. Does she have the bells and whistles? Yes, yes she does. I particularly enjoy the Lasso of Truth being a vibrant yellow rope. Can you live with the joints and proportions? That's ultimately what you have to ask yourself. For me, there are many other decent looking Wonder Woman figures that can hold some pretty good posing, but I always want that ONE figure, aesthetics be damned, that can pull off crazy poses. And that figure of Wonder Woman, without a doubt, is this one. So if you're pose crazy, I'd suggest you give this one a try. At the very least, you'll have a figure where you can make Wonder Woman do the Ahegao face.

This Independence Day 2020 Movie - dsc_1959 on net.photos image has 1024x684 pixels (original) and is uploaded to . The image size is 92833 byte. If you have a problem about intellectual property, child pornography or immature images with any of these pictures, please send report email to a webmaster at , to remove it from web.