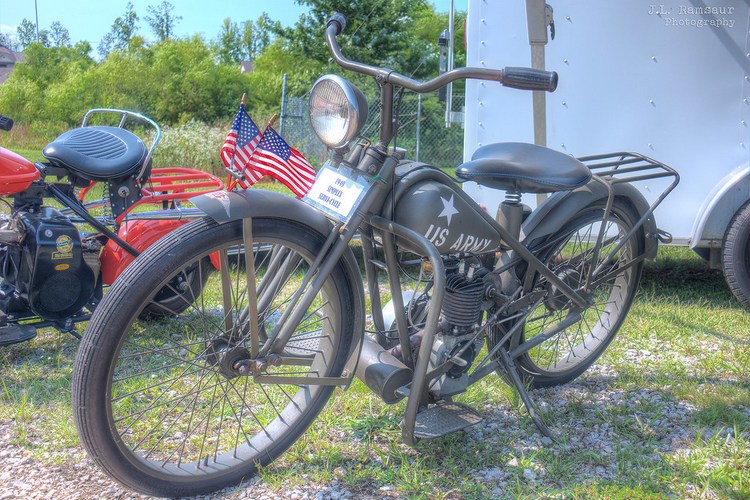 Simplex Manufacturing Corporation was an American manufacturer that made motorcycles from 1935 to 1975 including variations of the Simplex Servi-Cycle and was the only motorcycle manufacturer located in the American South. Over the years the Servi-Cycle relied on the same basic engine configuration-a single cylinder air-cooled 2-stroke developing 2 hp, which can power the little bike to 40 mph. In WW2, a special model was made for the US Army Airborne Forces, with quick release handlebars, as on the British Flying Flea and the James, so they could be quickly set sideways, to make it smaller. It also included modified foot boards, normally supported by the crashbars that were deleted on the Model GA-1, so the foot boards on this model folded up, again to make the width smaller. It is enough of a piece of Americana that a 1935 Simplex Servi-Cycle motorcycle is currently on display in the Smithsonian Institution's America on the Move exhibit. Three bracketed photos were taken with a handheld Nikon D7200 and combined with Photomatix Pro to create this HDR image. Additional adjustments were made in Photoshop CS6. "For I know the plans I have for you", declares the LORD, "plans to prosper you and not to harm you, plans to give you hope and a future." ~Jeremiah 29:11 The best way to view my photostream is through Flickriver with the link below: www.flickriver.com/photos/photojourney57/

This Independence Day 2 - 1949-u-s-army-simplex-servi-cycle-independence-day-car-show-cookeville-tennessee on net.photos image has 1024x683 pixels (original) and is uploaded to . The image size is 394760 byte. If you have a problem about intellectual property, child pornography or immature images with any of these pictures, please send report email to a webmaster at , to remove it from web.