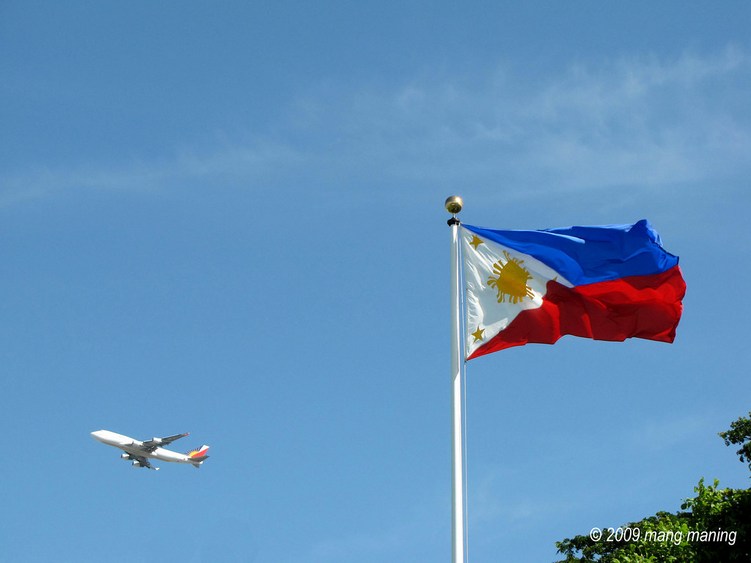 EXPLORE # 46 Today, June 12th 2009 is the 111th Anniversary of the Independence of the Philippines. The national flag of the Philippines is a horizontal bicolor with equal bands of blue and red, and with a white equilateral triangle based at the hoist side; in the center of the triangle is a golden yellow sun with eight primary rays, each containing three individual rays; and at each corner of the triangle is a five-pointed golden yellow star. The flag is displayed with the blue field on top in times of peace, and with the red field on top in times of war. Flagship carrier Philippine Air LInes Boeing 747 is shown here. SOOC except watermark. Bayan Ko Ang bayan kong Pilipinas Lupain ng ginto't bulaklak Pag-ibig na sa kanyang palad Nag-alay ng ganda't dilag At sa kanyang yumi at ganda Dayuhan ay nahalina Bayan ko, binihag ka Nasadlak sa dusa CHORUS Ibon mang may layang lumipad Kulungin mo at umiiyak Bayan pa kayang sakdal-dilag Ang 'di magnasang makaalpas Pilipinas kong minumutya Pugad ng luha at dalita Aking adhika Makita kang sakdal laya Bayan Ko (English: My Country) is one of the most recognizable patriotic songs in the Philippines that, because of its popularity, is sometimes assumed to be a folk song and the unofficial national anthem of the Philippines. It was originally written as a poem by José Corazón de Jesús in 1929, and set to music by Constancio de Guzman.

This Independence Day - soar-high-philippines on net.photos image has 1024x768 pixels (original) and is uploaded to . The image size is 94405 byte. If you have a problem about intellectual property, child pornography or immature images with any of these pictures, please send report email to a webmaster at , to remove it from web.