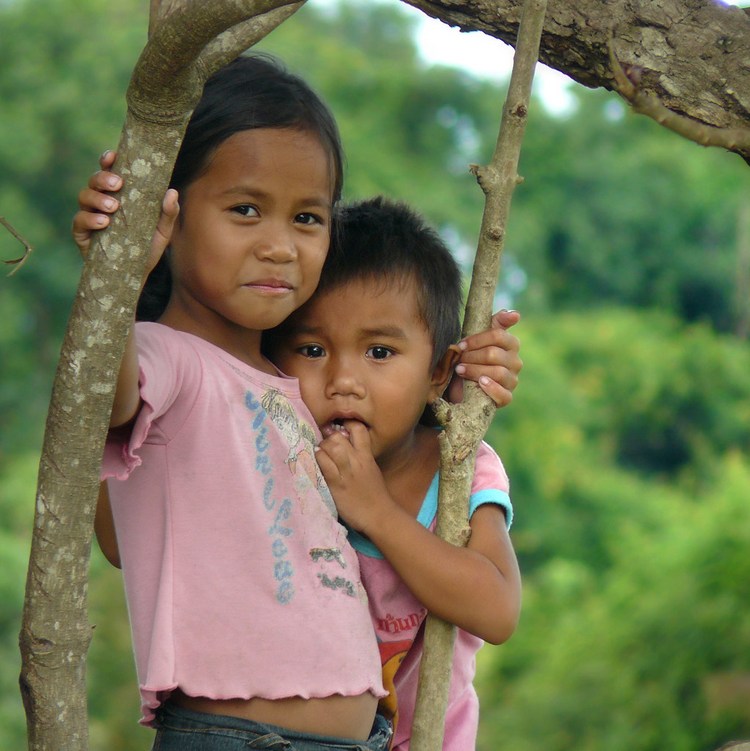 Little brother afraid to get out of that tree

© all rights reserved Please take your time... and enjoy it large on black Laos is blessed with some of Asia’s nicest rivers, and many of them are mellow. Children spent the day at school, and by the afternoon they were doing the chores required of them…building a fire for the kitchen, sweeping the leaves into a pile, or caring for the young siblings strapped to their back …young boys and girls from the age of seven or eight attentive to the baby’s every need. Amongst this was the laughter of children playing in the river. But sometimes they skip their days at school, going fishing. The vast majority of people are engaged in agriculture, especially subsistence rice farming on small family plots. Children help with farm chores from an early age, and most are engaged full-time in farming after leaving primary school. This little boy proudly climbing into the tree when I arrived. But getting out of the tree was more difficult. I guess It's more scary looking down than up. His older sister helps him to get out of the tree. These boys and girls enjoy their school holiday today. Independence Day on July 19 celebrates the granting of autonomy, or independence, from the French Union in 1949. School is important for ethnic minority kids, they should attend and complete primary education in order to overcome rural/urban, ethnic in the area of literacy and education. But it isn't that easy. The reason to skip school are the family economic considerations, involvement in family maintenance and subsistence tasks, the lack of perceived benefits from education. While poverty and lack of access are issues. In addition to these, ethnic minority kids have to face further barriers to education, including the distance from school facilities, their extreme poverty, and additional cultural barriers and the lack of fluency in the national language, Lao. The ethnic kids speak their own language. About 32% of all Laotians are related to Ethnic groups. Totally 160 ethnic groups and speak 82 distinct living languages. Photo taken on the island Don Det - Southern Laos. Children rarely have toys but enjoy catching fish, frogs, and insects to supplement the family diet. Boys are skillful with slingshots and blowguns in hunting small birds. Young girls help with child care and often carry a younger sibling astride a hip while they play with their friends. Kids have a great time running on the rampart, swimming in the Mekong river, taking boat rides along the river and playing. Lao seems a bit like heaven, the laughter is often & sincere, the rivers are cool and clean and not a speck of modern civilization in sight. In my perspective it is some of the best Laos can offer.

This Independence Day - little-brother-afraid-to-get-out-of-that-tree on net.photos image has 1023x1024 pixels (original) and is uploaded to . The image size is 250912 byte. If you have a problem about intellectual property, child pornography or immature images with any of these pictures, please send report email to a webmaster at , to remove it from web.