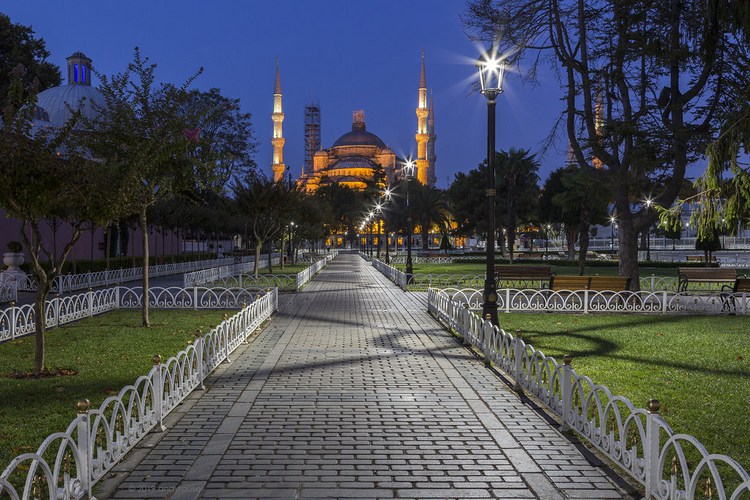 Istanbul, Turkey After our relaxing beach holiday in Croatia earlier this year our main holiday was always going to a different affair. Our travel bucket list seems to be getting longer with each passing year rather than shorter such is the diversity of countries and places you can travel to these days in the era of low cost flying... although a tragedy for Thomas Cook, their staff and holiday makers as I pen my thoughts this afternoon. We eventually decided on Istanbul and Baku as a two centre break, more for Baku as it contains a must visit attraction very high up on my own wish list than Mrs R's, but I'll get around to that later. Besides in the light of the recent Europa League Final between Chelsea and Arsenal we now know that there are no direct flights to Baku from the UK... a sign that's it's still not on the tourist radar yet! The most logical route was via Istanbul so we decided on a stop-over for a few nights. I'd thought all holiday how I was going to write about the images I will be posting and whereas they say "a picture paints a thousand words" I don't think it's always the case so this will be more of a travel blog. Those that survived my Japan ramblings... you know what to expect! Now I must confess, I've never been to Turkey, not even for a beach holiday. It's never really appealed to me... so this part was either going to confirm my thoughts and suspicions or prove to be a revelation! Our outbound flight and Manchester Airport did its usual best to relieve us of our money long before we even got to the departure gate... I'm beginning to despise this airport with every trip! All four flights were with Turkish Airways and I must say a very professional outfit, although the in-flight food is questionable - reheated scrambled egg and a slice of tomato didn't look or taste appetising (3 out of 4 meals). However, landing at Istanbul's new airport is an eye opener. If you've never passed thought it then you're in for a surprise. This newly opened "soft launched" airport (Oct 2018) and another terminal block (Apr 2019) rivals Dubai and Abu Dhabi airports for its scale and vision. Such is the design... a spacious metropolis that's actually pleasant to spend time in without ever feeling like sardines in a tin! This airport leaves every single UK airport in its wake I'm sorry to report and I've not even mentioned the new road network to and from this complex. I would have liked this to have been my opening image, but such is the security in this airport I didn't think it wise to start pointing an DSLR about the terminal building and besides, not even the Instagram generation dared do the same. By the time we had passed though the thorough passport control, collected our luggage and found our way to the taxi rank it was late afternoon. If I had any preconceptions about Turkey then Turkish taxi drivers certainly lived up to them - fast, darting, overtaking, undertaking, late braking... yes he pretty much demonstrated his full arsenal of driving techniques in the 50 minute journey to our hotel. Our hotel was situated a couple of back streets away from the great landmarks of Sultanahmet - a mere 5 minutes to the Blue Mosque and Haghia Sophia. The hotel was very traditionally furnished and the bedroom somewhat small but location wise, couldn't have picked a better spot, although the Four Seasons did look upmarket and I dare say four times the price as well! Which finally brings me round to my first posting... it was far too late to go out sightseeing and so we found a nice little restaurant not 50 meters from the hotel. Actually the whole street is full of bars and restaurants, but Mrs R had specifically researched this one out - the Cozy Blue Corner & Cafe Restaurant. I thought she'd made a mistake, any good restaurant doesn't need a picture book menu, but second surprise of the day - the food was bloody good and presented exactly as in the picture, what's more... cheap as well! Just to walk off some of this excellent food we wandered up to Sultanahment Meydani (gardens and fountain between the mosque and church). They are certainly architectural wonders of the last millennium and so an early photo-shoot the next morning was not going to be missed. So here is the Blue Mosque (known in Turkish as the Sultanahment Camii) in the blue hour.

This How to cook a turkey - the-blue-mosque on net.photos image has 1024x683 pixels (original) and is uploaded to . The image size is 322459 byte. If you have a problem about intellectual property, child pornography or immature images with any of these pictures, please send report email to a webmaster at , to remove it from web.