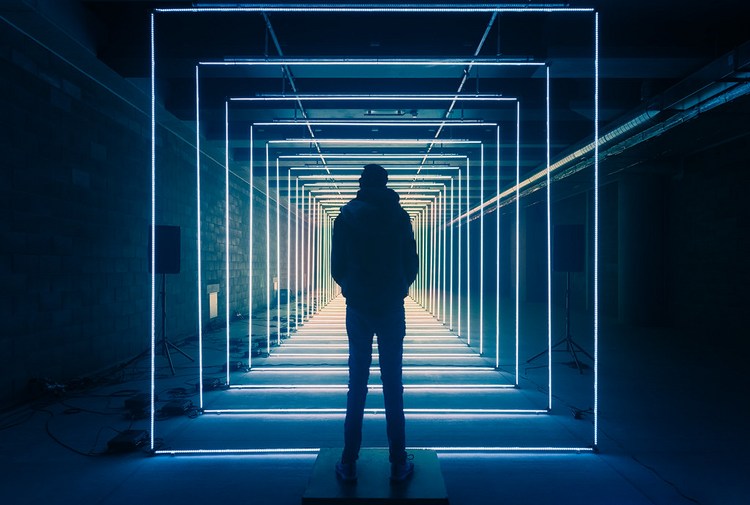 Between Lumiere London and the Canary Wharf Winter Lights, January was a busy month for London photographers -- and indeed anyone with a camera on their phone. Both events were free to the public, and featured a variety of light installations, from small-scale displays to large interactive artworks. Word of the events spread through social media quickly, and before long the most popular installations were drawing considerable crowds. This was very much the case with "On Your Wavelength", a light and sound installation designed by Marcus Lyall, which I visited with fellow photographer Ali Jawed on the opening night. The light display is powered by 30,000 LEDs, and these are in turn "powered" by anyone who volunteers to stand on a small platform wearing an EEG headset, which reads their brain's electrical data and then converts this information into light patterns and sound. Capturing this image was a challenge for a number of reasons: the installation's set-up and the crowds made using a tripod impossible; getting the shot meant waiting for a particularly photogenic individual to step onto the platform; and finally, in order to ensure straight vertical lines in the image, I knew I would need to stand up from the front row of the seating area and briefly block the view from the rest of the crowd. All of these put me outside of my comfort zone: bracketing exposures handheld in low light required a high ISO and steadier hands than mine; I also felt terrible about judging each volunteer as if they were a contestant on a reality show, and it's not in my nature to take a photograph at the expense of someone's else's opportunity to do the same. With all of this said, the D810 handles noise effectively, the majority of the audience were understanding when I blocked their view, and volunteers who stepped onto the platform were almost all women, so I knew I had my shot the moment a guy volunteered and drew audible gasps from the audience -- probably because he was remarkably tall, but perhaps simply because he was a guy. The image is a blend of five exposures, combined in Photoshop using a combination of luminosity masks and radial gradient masks. Using dark luminosity masks I was able to accurately isolate the individual from the shadows in the background, applying brighter exposures to the light display's midtones and shadows and at the same time preserving the vibrance and energy of the highlights without blowing them out. Once the exposures were blended, I used a reddish/orange-toned Solid Colour layer set to Soft Light and targeted this to the highlights to gently warm the far side of the light display, emphasising the rainbow of colours which the volunteer's brainwaves were apparently generating. Using Colour Balance adjustments and a Colour Lookup set to the Foggy Night preset, I then pushed the shadows towards a colder finish, emphasising the scene's futuristic aspect. Finally, using Nik's Silver Efex Pro set to Luminosity, I amplified the whites and increased the Soft Contrast across the image, darkening the shadows and hopefully drawing the viewer's eye to the dramatic light at the centre of the light display. The final result captures a dazzling light display, as well as the human element that makes the concept so innovative, but it was also quite heartwarming to see how this year's Winter Lights festivals brought out a creative side to people across London, some of whom were brave enough to volunteer to be part of the interactive displays and be photographed in the process. You can also connect with me on Instagram, Facebook, 500px and Google+.

This How To Get Backgrounds On Your Phone - wavelength on net.photos image has 1024x690 pixels (original) and is uploaded to . The image size is 177274 byte. If you have a problem about intellectual property, child pornography or immature images with any of these pictures, please send report email to a webmaster at , to remove it from web.