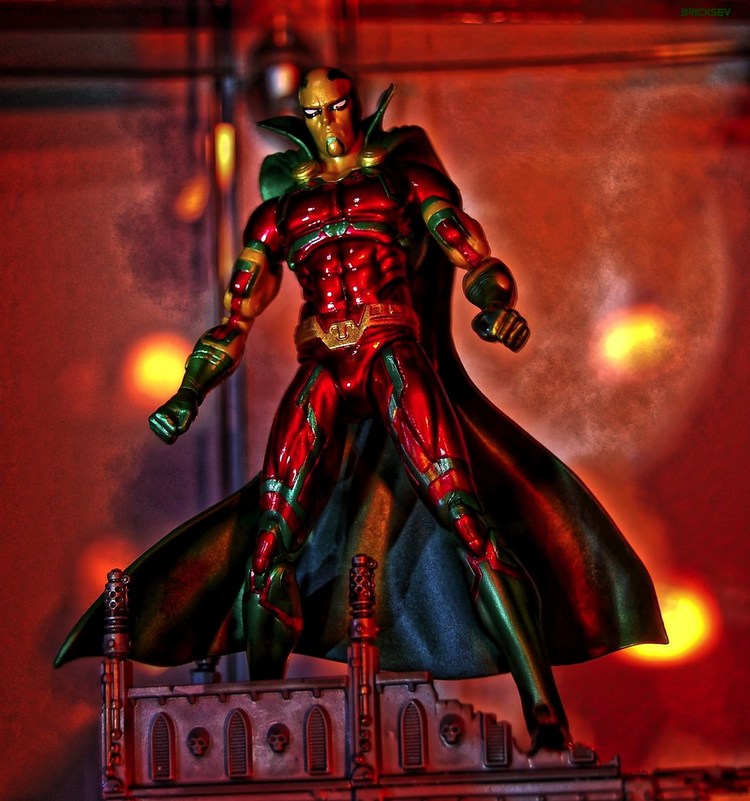 They need a miracle... Mister Miracle (My 200th photo) [Explored]

The Stormtrooper hits the prisoner with the stock of his blaster. He looks up and he sees a black clad figure standing over him. “You’ll tell me the location of that Vader’s memorabilia, Resistance scum” comes the voice of Kylo Ren as he Force chokes the prisoner. He releases the grip leaving the poor victim gasping for air. “Perhaps your friends will be more cooperative-he points at the other prisoners- once you are dead” He ignites his Lightsaber. “You can’t win. You will pay for your crimes” says boldly the member of the Resistance. “Ha! The Resistance can’t save you, fool! Nobody can! Only a miracle could save you!” Replies Kylo. “Did someone call me?” A voice interrupts one of Kylo's many deranged speeches. “What?” He turns to the voice and he sees a man standing on the ruined catwalk above them. “Who the hell are you, clown?” Kylo asks. “My name is Scot and they call me Mister Miracle” comes the swift reply. “Wow- whispers the Stormtrooper- that is supposed to impressed us”: “Ssh- Kylo objects- I know how to impress as well. Now look at me” “My name is Kylo Ren and they call me…um..” “How do they call me?” He asks to the Stormtrooper. “I don’t know, Boss. But I can search it online! I have my smartphone here! The Phasma-Phone!” “The Phasma-phone?” “Yeah, a smartphone designed by Captain Phasma. Trash compactor resistant so she does not get bored every time she visits a trash compactor! So smart! I mean not just because it’s a smartphone, you know boss, the smart part of…” “Hurry up, you idiot! Find how I’m called so I can impress this clown!” Kylo commands. “Here, just few more clicks..” “Quickly! Before that clown starts to make fun of the Great Kylo Ren!” “I got it, Boss!” “Good. How do they call me?” Kylo asks. “Arrogant, insane…” The Stormtrooper begins to read. “Shut up and give me that phone- Kylo shouts- I’ll put you on the new base’s sanitation duties!” He grabs the smartphone and starts to read the content himself. “Silly, pathetic, mockery of a villain…What?- He continues to read- Wannabe Sith, immature, mentally deranged, the tantrum knight…” and so on. “Damn I hate who writes these scripts!” “Vader help me! Vaadeer!” He has one of his rage outbursts smashing things around. When he calms down after the Stormtrooper shows him a hologram of Vader’s helmet he looks up at Mister Miracle and says: “My name is Kylo Ren and apparently they call me a madman with delusions of grandeur” “I really hate who writes these scripts!” It seems Kylo made a new enemy, one more hehe :) I featured Kylo in the background story because I plan to make a fight between him and Mister Miracle figure and so I set the scene :) I think I may have written a wall of text lol :) The subject is Mister Miracle action figure by DC Direct. Such is the awesomeness of DC Comics that they even make their own action figures and that means they can make action figures of every character even of the less “famous” ones. Cool :) I just realized this is the 200th photo I posted on Flickr. If I realized it before I would have made a sort of “special photo”, well maybe for the 250th or 300th one :) I hope you like this photo :)

This How To Get Backgrounds On Your Phone - they-need-a-miracle-mister-miracle-my-200th-photo-explored- on net.photos image has 959x1024 pixels (original) and is uploaded to . The image size is 187644 byte. If you have a problem about intellectual property, child pornography or immature images with any of these pictures, please send report email to a webmaster at , to remove it from web.