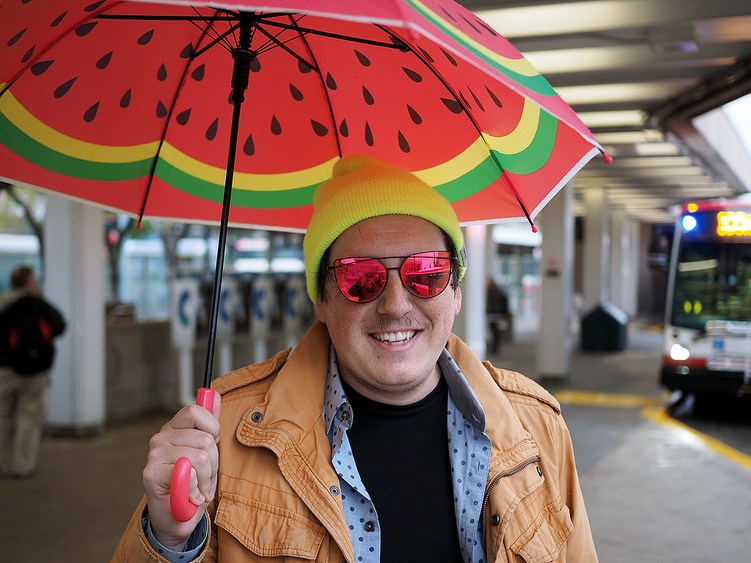 I saw him at the intersection waiting for the light to change and I caught up with him as we both approached the subway station. I was intrigued by his colorful, undersized umbrella, reflective glasses, friendly face, and mismatched socks. When I introduced myself and asked if I could photograph him he was amused and said “Sure, if you want to.” Meet Nick. I grabbed a quick cell phone photo in the parking lot of a bank but as we talked and I saw how approachable he was, I thought to turn this into a Human Family project submission. He was interested in the project and said he wasn’t in a rush. Just then I was approached by a woman who saw my camera and started asking questions about her film camera and if it was still possible to get film developed in the digital age. Nick and I collaborated in giving her some friendly advice before we moved to the entrance to the subway station to continue our conversation, ducking out of the way of commuters as they came and went. Nick is 30 and was born in New York City but grew up in Lindsay, a town an hour and a half from Toronto. He explained that he is Vice President of a music services company that helps indie musicians by promoting, marketing, and merchandising their work. You can read about him on their website here: indiepool.com/?page_id=1589. Our conversation was interesting as he explained how much the music industry has changed in the digital age and that marketing (his background is in marketing) has to contend with a customer base that expects to get its music for free on the internet. The umbrella, which had caught my attention, came from a Japanese store down the street and he liked the fact that it was somewhat unconventional with bright colors. He said he is virtually color blind so he likes very bright colors which are the only ones he can see. Laughing, he said his girlfriend loves his unique umbrella. However, she hates his neon toque so said with a twinkle that he loves wearing it just to get under her skin. He was sure to pick bright colors today because it was such a dark, drizzly day. I mentioned his mismatched socks and he said he likes a lot of variety and doesn’t really care if they match or not. It makes things easier to just grab any two socks from the drawer and if the washing machine “eats”one, it doesn’t make any difference. His way of describing his views was fascinating and it was fun chatting. When I asked Nick if he would consider himself a bit on the quirky side he smiled and said “No, I wouldn’t use that work really because most people who see themselves as quirky are working to get a certain reaction from people. I just don’t worry too much about conventions and like being my own person. Someone once told me that the way to identify a big shot is to look at his watch. If it’s ridiculously expensive, they are a big shot. Right then I started wearing children’s watches.” “What advice would you give to your younger self?” I asked. He thought for a moment and said “Stop hanging on to negative feelings. Let the toxins out of your system.” Nick’s advice to the project is “Just be yourself and do what you want, not what others want you to do.” Another amusing twist of our conversation was Nick's apology for the state of his moustache. He wanted to support the Movember movement which draws attention to prostate cancer, but his moustache is less luxuriant than he would like - so he is getting a head start in October. It had been a delightful conversation which I think I can say we both enjoyed equally. Nick told me the only reason our paths had crossed was because he’d come to my neighborhood to do a quick bit of shopping. Maybe it was just meant to be. He was headed for a bus so I accompanied him onto the bus platform to take the photo above and we both continued on our separate ways. This is my 778th submission to The Human Family Group on Flickr. You can view more street portraits and stories by visiting The Human Family. Follow-up: I received a very nice, humorous email from Nick thanking me for the photos and saying he had enjoyed the experience. He offered a couple of minor corrections which I have made to the text. I wrote that the changes were made and said that with today being another rainy day he was probably out with his umbrella again. His response was very much in keeping with his friendly, witty manner: “This morning wasn’t too bad for rain – so I foolishly left my umbrella at home. It’s shame, I do love having the opportunity to take it out for a spin!”

This How To Get Backgrounds On Your Phone - nick on net.photos image has 1024x768 pixels (original) and is uploaded to . The image size is 228930 byte. If you have a problem about intellectual property, child pornography or immature images with any of these pictures, please send report email to a webmaster at , to remove it from web.