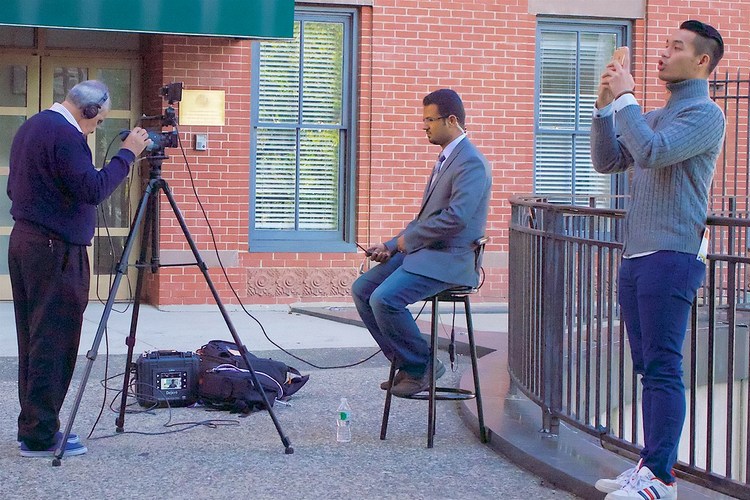 New Yorkers like background singing with their local news broadcasts

I stumbled upon this scene at 44th Street and First Avenue, when I was looking for a nice view of the United Nations Building. I guess I wasn't the only one ... It looks like the two people in the background were getting set up for some kind of news broadcast ... but I don't know what was going on with the guy in the foreground. Maybe he was carrying on a Skype/FaceTime video conversation -- but it sure did look like he was singing to his iPhone. Whether he was associated with the other two people, I never did figure out ... If I had been willing to hang around for an hour or so, I probably could have spoken to them and found out what was happening. But I didn't have the patience. I took the shot and moved on ... *************** This set of photos is based on a very simple concept: walk every block of Manhattan with a camera, and see what happens. To avoid missing anything, walk both sides of the street. That's all there is to it … Of course, if you wanted to be more ambitious, you could also walk the streets of Brooklyn, Queens, Staten Island, and the Bronx. But that's more than I'm willing to commit to at this point, and I'll leave the remaining boroughs of New York City to other, more adventurous photographers. Oh, actually, there's one more small detail: leave the photos alone for a month -- unedited, untouched, and unviewed. By the time I actually focus on the first of these "every-block" photos, I will have taken more than 8,000 images on the nearby streets of the Upper West Side -- plus another several thousand in Rome, Coney Island, and the various spots in NYC where I traditionally take photos. So I don't expect to be emotionally attached to any of the "every-block" photos, and hope that I'll be able to make an objective selection of the ones worth looking at. As for the criteria that I've used to select the small subset of every-block photos that get uploaded to Flickr: there are three. First, I'll upload any photo that I think is "great," and where I hope the reaction of my Flickr-friends will be, "I have no idea when or where that photo was taken, but it's really a terrific picture!" A second criterion has to do with place, and the third involves time. I'm hoping that I'll take some photos that clearly say, "This is New York!" to anyone who looks at it. Obviously, certain landscape icons like the Empire State Building or the Statue of Liberty would satisfy that criterion; but I'm hoping that I'll find other, more unexpected examples. I hope that I'll be able to take some shots that will make a "local" viewer say, "Well, even if that's not recognizable to someone from another part of the country, or another part of the world, I know that that's New York!" And there might be some photos where a "non-local" viewer might say, "I had no idea that there was anyplace in New York City that was so interesting/beautiful/ugly/spectacular." As for the sense of time: I remember wandering around my neighborhood in 2005, photographing various shops, stores, restaurants, and business establishments -- and then casually looking at the photos about five years later, and being stunned by how much had changed. Little by little, store by store, day by day, things change … and when you've been around as long as I have, it's even more amazing to go back and look at the photos you took thirty or forty years ago, and ask yourself, "Was it really like that back then? Seriously, did people really wear bell-bottom jeans?" So, with the expectation that I'll be looking at these every-block photos five or ten years from now (and maybe you will be, too), I'm going to be doing my best to capture scenes that convey the sense that they were taken in the year 2013 … or at least sometime in the decade of the 2010's (I have no idea what we're calling this decade yet). Or maybe they'll just say to us, "This is what it was like a dozen years after 9-11". Movie posters are a trivial example of such a time-specific image; I've already taken a bunch, and I don't know if I'll ultimately decide that they're worth uploading. Women's fashion/styles are another obvious example of a time-specific phenomenon; and even though I'm definitely not a fashion expert, I suspected that I'll be able to look at some images ten years from now and mutter to myself, "Did we really wear shirts like that? Did women really wear those weird skirts that are short in the front, and long in the back? Did everyone in New York have a tattoo?" Another example: I'm fascinated by the interactions that people have with their cellphones out on the street. It seems that everyone has one, which certainly wasn't true a decade ago; and it seems that everyone walks down the street with their eyes and their entire conscious attention riveted on this little box-like gadget, utterly oblivious about anything else that might be going on (among other things, that makes it very easy for me to photograph them without their even noticing, particularly if they've also got earphones so they can listen to music or carry on a phone conversation). But I can't help wondering whether this kind of social behavior will seem bizarre a decade from now … especially if our cellphones have become so miniaturized that they're incorporated into the glasses we wear, or implanted directly into our eyeballs. If you have any suggestions about places that I should definitely visit to get some good photos, or if you'd like me to photograph you in your little corner of New York City, please let me know. You can send me a Flickr-mail message, or you can email me directly at ed-at-yourdon-dot-com Stay tuned as the photo-walk continues, block by block ...

This How To Get Backgrounds On Your Phone - new-yorkers-like-background-singing-with-their-local-news-broadcasts on net.photos image has 1024x683 pixels (original) and is uploaded to . The image size is 262867 byte. If you have a problem about intellectual property, child pornography or immature images with any of these pictures, please send report email to a webmaster at , to remove it from web.