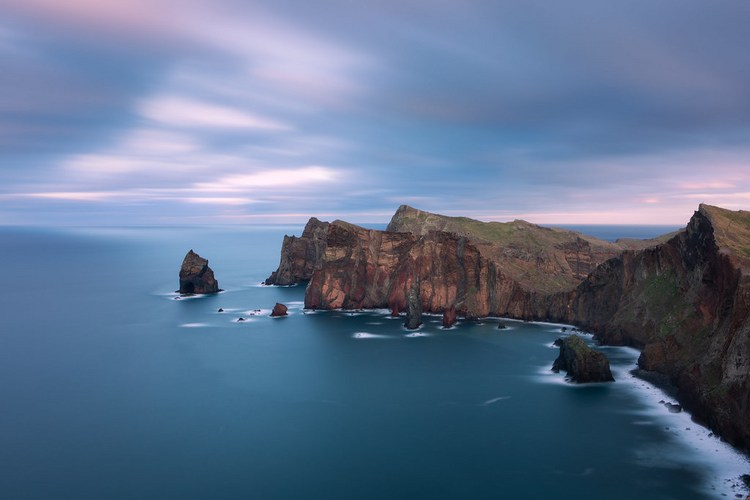 Endless Views at the Edge of the Floating Garden

"You should come up. It's beautiful." Ali was hiding in the car with the second of the pair of books she'd liberated from the shelf at the place we'd been staying in, recuperating from the walk to the summit of Pico Ruivo that we'd made earlier on that afternoon. "I'm coming," came the reply. No matter how tired she was from the upward slog, nor how warm she might be sitting in the car, probably under a blanket a couple of hundred yards away, it seemed a shame for her to miss out. Dutifully she arrived, admitting that this view to the east was indeed quite wonderful. So was the one to the west. The south too for that matter. If you looked north you wouldn't be complaining either. By the time she had wandered up the slope to where I stood poised over a clifftop, I'd already taken this shot and had greedily moved onto the next epic view to the west, where the sky was starting to get interesting as the sun disappeared somewhere over the mountains we'd just come down from. Suffice to say I think you can expect to see another shot from the mildly ecstatic hour I spent gazing at the assembly of clouds, water, waves, stacks, mountains and cliffs that make this island so unforgettable. There are plenty of good reasons for the existence of so many miradouros both along the coast and interior here. It was the last "going out" day at the Floating Garden before the adventure was due to come to a close, and a sunset taking in the views from the Ponta do Rosto seemed the perfect way to conclude the trip. We'd been here a few days earlier and walked to the tip of the rugged Ponta de Sao Lourenco path, and had vowed to return before Easyjet flight 6246 was due to spirit us away from this sub-tropical world and back to the cold northern climes we call home. Under clear skies we could see the shimmer of Porto Santo and its sandy white coast, Madeira's much smaller sister island twenty odd miles to the north-east. Slightly closer to the south-east were the mysterious mountain ridges poking out from the surface of the ocean, the Ilhas Desertas, inhabited by nature alone, hovering serenely on the calm petrol blue Atlantic waters like a group of enormous serpents. And behind us lay all of the Floating Garden, save for this thin strip of rocky coastline that tapered off into the ocean a couple of miles or so from where we were standing. It was one of those evenings where I felt myself lulled into a glorious sense of peacefulness, enchanted by the beauty of what a huge volcano under the sea could do if it were given a few million years to set the foundations and get the architects in to make the final flourishes. One of those evenings where the clouds were just about moving so that a long exposure such as this might give those blues and magentas a purposeful sense of direction and flatten the mirror like sea. Evenings like this are made for ten stop filters I so often think. With the aid of a phone snap I asked my ex geography teacher mate Dave to tell me what I was looking at. The phrase "horizontal layers of ash and pahoehoe lava in the big trough on the right hand side" left me none the wiser, but Dave still writes the GCSE textbooks used in schools across the nation, even though he retired several years ago. His garden summerhouse is full of jars of interesting looking rock collections from his many trips around the world so I've no reason to doubt his verdict. On each one there is a label, such as "Mount St Helens volcanic ash" for example. Bizarrely Madeira is one of the very few places I've been to that he hasn't. I think he wants to go now though. Whatever those layers were, they did look very pretty I thought. Orange tones always work well against a strong blue background. Of course I was supposed to come here for sunrise. More than one of you told me that - but I struggle shamefully in the early hours - we'll never get along I'm afraid. Last time I stirred myself into a pre-dawn start the rest of the day went very badly. I'm lucky that I live in a place where most of the great views point towards the west. And this shot also reminds me that sometimes the sunset is behind us. Well obviously it's not - that doesn't make sense, but at the same time the fading light can bring drama to the eastern sky as well. In fact the evening delivered the best light show of the entire two weeks, and we stayed at this spot until it was dark, watching the occasional plane come in to land on that infamous runway on the side of the mountains between Machico and Funchal. Cover your eyes when you're about to touch down if you're going in daylight or you may be wondering whether the pilot is planning to miss the runway entirely and land on the sea or the main road that passes underneath and then alongside it. While this may be a shot from the final evening of our fortnight on the Floating Garden, there are still files full of adventures from the rest of the holiday that remain untouched. I'll get there in time, but now another short adventure beckons. I hope you all enjoyed that chocolate, and for those of you who are enjoying your last day off, I hope the sun is shining in your part of the world. Preferably with some nice clouds to add to your sunset shots. Have a good one.

This How To Get Backgrounds On Your Phone - endless-views-at-the-edge-of-the-floating-garden on net.photos image has 1024x683 pixels (original) and is uploaded to . The image size is 94920 byte. If you have a problem about intellectual property, child pornography or immature images with any of these pictures, please send report email to a webmaster at , to remove it from web.