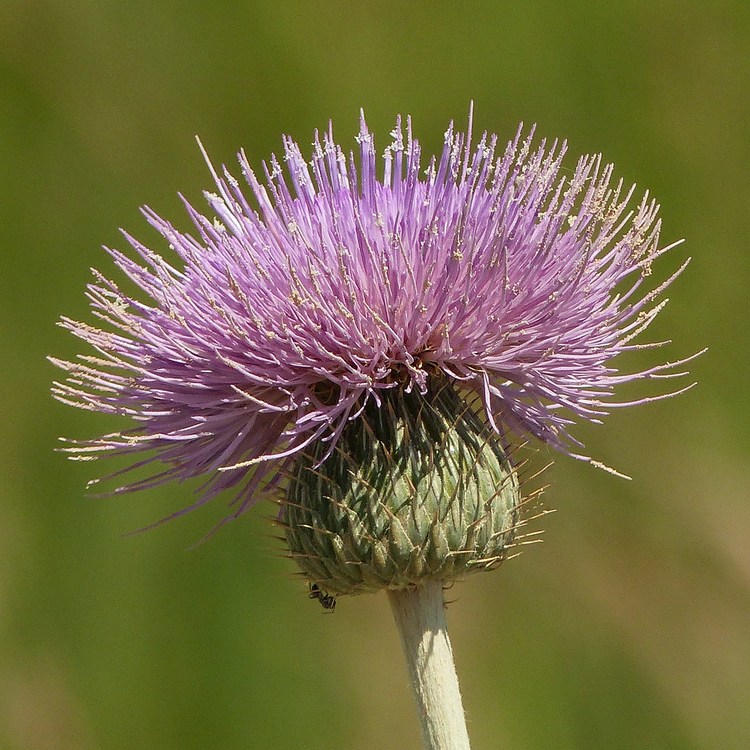 This was one of many beautiful Thistles growing along the edges of one of the country roads way down south. Not sure what species it is - maybe Bull Thistle? Small-flowered Sunflowers were growing along with it. We also saw a couple of yellow Coneflowers in the same area. The day before yesterday, 1 July 2017, was a great day, spent with friend, Pam. I picked her up just after 8:00 am and did a long drive in Southern Alberta. We saw our target bird - a Common Nighthawk, and all sorts of other things including plants and old barns. It took a round trip of 414 km to get the Nighthawks, but it was so worth it! Much further than I normally drive and I am still tired as can be today. Towards the end of our day, the rain arrived, accompanied by lightning streaks. This couldn't have been timed more perfectly, to wash off a lot of the dust that covered my car after 12 hours of driving hot, dusty roads! So welcome! We have another hot day today and the forecast is for very hot days for at least the next week. So far, the forecast is 33C for Friday, 35C for Saturday and 31C for Sunday. it was such a thrill to see a Common Nighthawk / Chordeiles minor (a rather strange looking bird), as I had always wanted to see one actually lying on a fence post or wooden railing. People get such amazing photos of them like that, and that is what I was determined to find this summer. Last year, I had driven to this area in Southern Alberta, hoping to find one, but had been out of luck. Though I ended up with the one in the photo I posted yesterday, lying on a hard, metal railing that lacked character, I'm still happy as can be. Not only did friend Pam and I see this one, but there were three other Nighthawks there, too. Two of the others were also on a metal rail, but the fourth was on a fence post - not the best angle, but it was still nice to see a fence post perch. How close we came to missing them. I said I wanted to just check the first part of a small side road first, before continuing on the road we were on - and there they were! I had seen a nighthawk on maybe five different occasions over the years, but most were in flight and one was perched very high up in a tree. For Pam, this was the first time she had ever seen one, and she was so happy to see this lifer. "On warm summer evenings, Common Nighthawks roam the skies over treetops, grasslands, and cities. Their sharp, electric peent call is often the first clue they’re overhead. In the dim half-light, these long-winged birds fly in graceful loops, flashing white patches out past the bend of each wing as they chase insects. These fairly common but declining birds make no nest. Their young are so well camouflaged that they’re hard to find, and even the adults seem to vanish as soon as they land." From AllABoutBirds. www.allaboutbirds.org/guide/Common_Nighthawk/id I was so tired after driving such a long distance and it was a hot day - the temperature got up to 30C. I so rarely do such a long drive, and I've barely driven all winter and spring. It felt so good to actually get out on a long drive like this, and we saw all sorts of interesting things that we just had to stop and photograph - of course! Every single time I go out with my camera for a drive, I never forget to be SO thankful to live in a country where I have the freedom and safety to go where I want, and to see such beauty. Thank you, Alberta and Albertans - and Happy 150th Birthday, Canada! Such a young country.

This How Hot Is White Lightning - thistle on net.photos image has 1024x1024 pixels (original) and is uploaded to . The image size is 346471 byte. If you have a problem about intellectual property, child pornography or immature images with any of these pictures, please send report email to a webmaster at , to remove it from web.