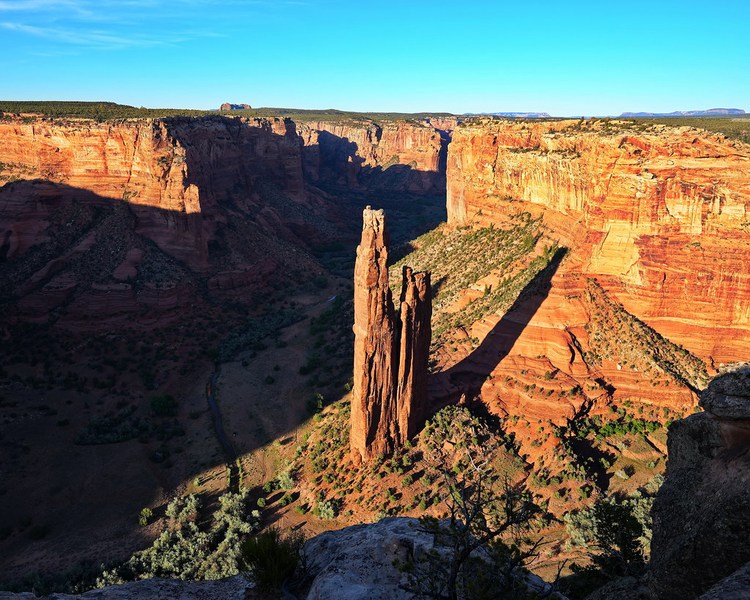 This was the shot I wanted. Spider Rock at 1900 from the overlook. I am happy with it. I was 4 minutes late and the Sun moves pretty fast in these Canyons. (The EXIF time is Arizona Time not Navajo Nation time. The Rez changes to DST) Spider Rock ( Tsé Ná ashjéé' ii ) is named after Spider-Woman (Na'ashje'ii Asdzaa in Diné Bizaad). www.americansouthwest.net/arizona/canyon_de_chelly/overlo... The easternmost viewpoint on the South Rim Drive, and perhaps the best, is of Spider Rocks, the twin towers of sandstone guarding the confluence of Canyon de Chelly with Bat and Monument canyons to the south. A 1/4 mile path leads to the overlook, which also has a good panorama back towards Face Rock and a V-shaped tributary ravine on the north side. A 'No Vending' notice warns against Navajo jewelry sellers, who are usually in residence at all the other overlooks. The surroundings are now quite overgrown, with pinyon pine and juniper, bushes and yucca, quite different to the open, sandy, desert-like conditions around Chinle, since although the wash on the canyon floor remains fairly level, the rim plateau steadily rises; the elevation at Spider Rocks Overlook is nearly 7,000 feet, 1,500 feet higher than the town. www.indigenouspeople.net/spiderro.htm Spider Rock stands with awesome dignity and beauty over 800 feet high in Arizona's colourful Canyon de Chelly National Park (pronounced da Shay). Geologists of the National Park Service say that "the formation began 230 million years ago. Windblown sand swirled and compressed with time created the spectacular red sandstone monolith. Long ago, the Diné (Navajo) Indian tribe named it Spider Rock. Stratified, multicolored cliff walls surround the canyon. For many, many centuries the Diné (Navajo) built caves and lived in these cliffs. Most of the caves were located high above the canyon floor, protecting them from enemies and flash floods. Spider Woman possessed supernatural power at the time of creation, when Diné (Navajo) emerged from the third world into this fourth world. At that time, monsters roamed the land and killed many people. Since Spider Woman loved the people, she gave power for the Hero Twins (Monster- Slayer and Child-Born-of-Water) to search for the Sun-God who was their father. When they found him, Sun-God showed them how to destroy all the monsters on land and in the water. Because she preserved their people, Diné (Navajo) established Spider Woman among their most important and honoured Deities. She chose the top of Spider Rock for her home. It was Spider Woman who taught Diné (Navajo) ancestors of long ago the art of weaving upon a loom. She told them, "My husband, Spider Man, constructed the weaving loom making the cross poles of sky and earth cords to support the structure; the warp sticks of sun rays, lengthwise to cross the woof; the healds of rock crystal and sheet lightning, to maintain original condition of fibres. For the batten, he chose a sun halo to seal joints, and for the comb he chose a white shell to clean strands in a combing manner." Through many generations, the Diné (Navajo) have always been accomplished weavers. From their elders, Diné (Navajo) children heard warnings that if they did not behave themselves, Spider Woman would let down her web- ladder and carry them up to her home and devour them! The children also heard that the top of Spider Rock was white from the sun-bleached bones of Diné (Navajo) children who did not behave themselves! One day, a peaceful cave-dwelling Diné (Navajo) youth was hunting in Dead Man's Canyon, a branch of Canyon de Chelly. Suddenly, he saw an enemy tribesman who chased him deeper into the canyon. As the peaceful Diné (Navajo) ran, he looked quickly from side to side, searching for a place to hide or to escape. Directly in front of him stood the giant obelisk-like Spider Rock. What could he do? He knew it was too difficult for him to climb. He was near exhaustion. Suddenly, before his eyes he saw a silken cord hanging down from the top of the rock tower. The Diné (Navajo) youth grasped the magic cord. which seemed strong enough, and quickly tied it around his waist. With its help he climbed the tall tower, escaping from his enemy who then gave up the chase. When the peaceful Diné (Navajo) reached the top, he stretched out to rest. There he discovered a most pleasant place with eagle's eggs to eat and the night's dew to drink. Imagine his surprise when he learned that his rescuer was Spider Woman! She told him how she had seen him and his predicament. She showed him how she made her strong web-cord and anchored one end of it to a point of rock. She showed him how she let down the rest of her web-cord to help him to climb the rugged Spider Rock. Later, when the peaceful Diné (Navajo) youth felt assured his enemy was gone, he thanked Spider Woman warmly and he safely descended to the canyon floor by using her magic cord. He ran home as fast as he could run, reporting to his tribe how his life was saved by Spider Woman! ps The time of my EXIF is Arizona time not Navajo Reservation Time. 8. “A good photograph is knowing where to stand.” – Ansel Adams. I would add "And when to stand there" :) With the marvelous cameras we have now, I would get here earlier, do a time lapse, and choose the best frame. But this still might have been the frame I would have chosen. pps My son took a hilarious photo of me taking this photo. I hope no one other than my son & I ever see that photo. :0 In 1911, "Edward S. Curtis wrote and photographed this segment on Canyon De Chelly, home of the Navajo Indians. Curtis describes the history of the canyon and it's inhabitants. This is part of a larger film entitled, The Indian Picture Opera." www.youtube.com/watch?v=cKJJnBsWbNs DSC00177 acd

This How Fast Is White Lightning - spider-rock-overlook-canyon-de-chelly-navajo-nation on net.photos image has 1024x819 pixels (original) and is uploaded to . The image size is 326197 byte. If you have a problem about intellectual property, child pornography or immature images with any of these pictures, please send report email to a webmaster at , to remove it from web.