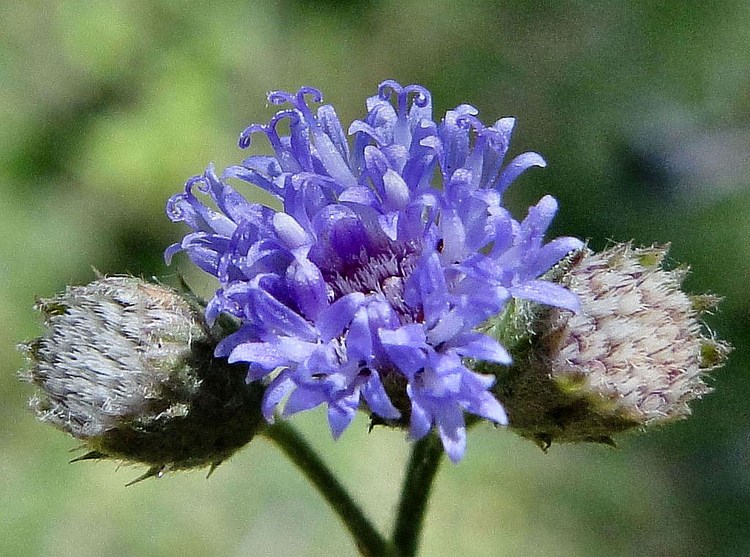 In ordinary parlance I know this pretty little plant as Vernonia, named after an early plant collector in Maryland, USA, William Vernon (c.ca.1666/7-c.1711/15). That's the name it was given by that indefatigable German botanist Christian Friedrich Lessing (1809-1862), replacing great Linnaeus's tag Conyza cinerea. Since then it's had many names: Blumea esquirolii, Seneciodes cinereum, Cacalia cinerea, Calea cordata, Serratula cinerea and others. Until H. Robinson in 1990 proposed the Very Scientific Cyanthillium cinereum. This is now the accepteed name, but no-one will mind if we continue to call it Vernonia among ourselves! Vernonia has a pretty little lilac-purple flower that's hard to photograph just right because of problems with depth of focus. As I was pondering it in a field with its brothers and sisters, two young men Mugni and Wiwin, slipped down from the hill and in the shade of a Pandan sat watching me. Soon they scurried around and brought me a bouquet of our Vernonia. Hardly a word could be spoken but they waxed enthusiastic together when I showed them how to look through my magnifying glass. So much intricacy they'd apparently not expected. Then, untethering one of those Lombok brown cows, they were gone leaving me to ponder photography angles in the Warm Sun.

This Focused Synonym - lets-just-call-it-vernonia-cyanthillium-cinereum-little-ironweed-near-malimbu-lombok-indonesia on net.photos image has 1024x760 pixels (original) and is uploaded to . The image size is 186093 byte. If you have a problem about intellectual property, child pornography or immature images with any of these pictures, please send report email to a webmaster at , to remove it from web.