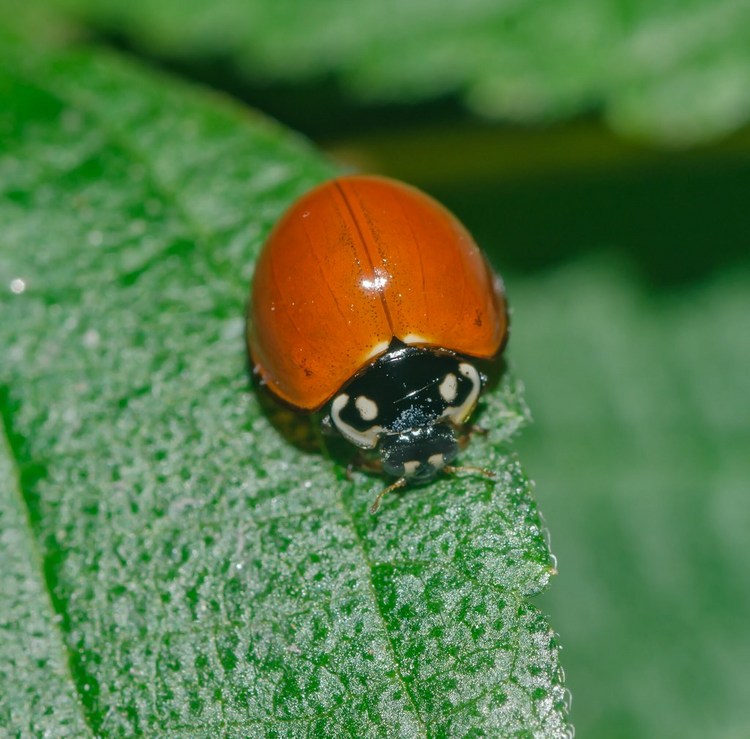 Stained in Blood Description: Cycloneda sanguinea is a beetle in the order Coleoptera, suborder Polyphaga, infraorder Cucujiformia, superfamily Cucujoidea, family Coccinellidae, subfamily Coccinellinae and tribe Coccinellini. Its synonym binominal nomenclature is Coccinella sanguinea (Linnaeus, 1763). The dorso is convex and the elytra measure around 5mm according to Gravena (1983) e Gallo et al. (1988), and are orangeish-red with many punctuations mostly focused near the elytral suture. They are remarkable in that they are unspotted; a different characteristic from most Coccinellids. The pronotum has two white patches, one on each side that goes from the beggining of its posterior area going all the way towards the posterolateral angle, to the anterolateral angle to the beggining of the anterior area. Close to these white patches, between them and the median area of the pronotum there is a pear-like shaped, small white patch. The pronotum is black, contrasting with the white patches. The head is black and small with two large compound eyes; next to the eyes there are two white markings and a white line above the maxillary palpi. The scutellum is small, black and triangular. Sexual dimorphism is present and evident: Males possess a white patch going from the medial area of the anterior part of the pronotum upwards but ending shortly. In simpler terms, they have a white line just behind the head going up and ending shortly. Females (which is the case of the subject portrayed) has no such characteristic, the anteromedial area of the pronotum lacking the white patch and being entirely black. Legs made of a coxa, femur, tibia, tibial spur, tarsus and tarsal claw. On the underside, as evidently seen in another picture I took (flic.kr/p/29Ak3nQ), we can see a postcoxal line just posterior to the coxa. 6 abdominal segments are evident; the first forms an upside-down "U", the second is the longest and the subsequent segments proceed to shorten in length. Underside is also made of an epimeron, elytral epipleuron, metasternum, mesosternum, prosternal carina and prosternum. It is evident in the lower view of the head the presence of maxillary palpi. I should not give an analysis on the antennae as I don't know their morphological characteristics; the number of segments might fail me, but I believe around 11 segments are present. Wings are located under the elytra and are membranous, veiny and transparent. The larvae are slender with 11 segments, which might vary between growth instars. The first and second segments display a large, yellowish-orange patch with black markings on the laterals as well as yellowish-orange patches. Third segment made of a yellowish-orange patch on each lateral and a tiny patch dorsally. Fourth and seventh segments with a small yellowish-orange patch dorsally and 6th segment with a longer, yet still small dorsal yellowish-orange patch. 8th segment with a tiny yellowish-orange patch dorsally. 9th, 10th and 11th segments are black. 5th segment almost entirely yellowish-orange. The pronotum is yellowish-orange with two, large black patches near the posterior part. The head is black. Legs are black with a coxa, femur, tibia and, seemingly, tarsus, but my knowledge on their legs end here. Pupae are rounded/curved and overall orange with black dorsal, lateral and ventral parts. Appendages are free and evident, with no movement and fixed on the substrate. However, they can curve their body if threatened. The larvae and the adults are predators, feeding on the liquid of their prey and leaving only the exuvia as residual mass when larvae, and eating the prey completely when adults. They are insectivorous and will mostly feed on members of Aphididae (such as Dactynotus sp.) and Coccoidea. The pupae of Cycloneda sanguinea possess the remarkable characteristic of being able to "bite" potentially threatening individuals. The incubation of the eggs takes around 3-5 days and the larval stage takes around 9 days, with an average of each instar being around 2,43, 1,57, 1,86 and 3,57 days, respectively for the first, second, third and fourth instars. The pre-pupa and pupa stages last around 0,86 to 4,14 days, respectively. Larvae generally feed on an average of 14-17 prey per day and around 137-320 (depending on the temperature; higher temperatures mean less consumption, while colder temperatures mean more consumption) prey during the whole larval period, with an elevating consumption after each instar. The larvae can depend on cannibalism if needed. Recently emerged adults present light-yellow elytra. Sometimes, the pre-pupa stage is skipped, with the mature larva directly turning into the pupa. Adults can live around 50 days and eat around 20 prey a day. They occur in many countries of Latin America, North America and Europe, with a wide distribution range. Habitats include weedy areas with plenty of plants that draw in Aphididae and Coccoidea. This includes many habitats within their area of distribution. Found on the 16th floor of a flat in an urban habitat. Sources: www.revistas.ufg.br/pat/article/view/2915/2962 en.wikipedia.org/wiki/Cycloneda_sanguinea eol.org/pages/1173313/names www.scielo.br/scielo.php?script=sci_arttext&pid=S0101... ...And myself. PROJECT NOAH (Português): www.projectnoah.org/spottings/287337815

This Focused Synonym - cycloneda-sanguinea-unspotted-ladybird-beetle-linnaeus-1763- on net.photos image has 1024x1009 pixels (original) and is uploaded to . The image size is 178432 byte. If you have a problem about intellectual property, child pornography or immature images with any of these pictures, please send report email to a webmaster at , to remove it from web.