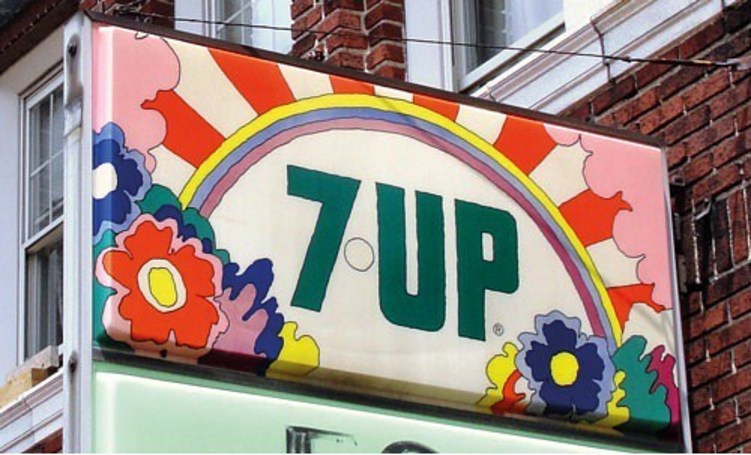 7Up UnCola hanging sign by John Alcorn (NOT Peter Max)

- - -9/8/13: CAUTION TO EBAY BIDDERS: The seller of a sign attributed to Peter Max in a listing that ends at 1800 PDT today is aware that it is not by him, but will not update the listing accordingly. Don't be fooled by sellers that know better but try to deceive the bidding public. "This is a 12" x 24" metal sign made by Stout Sign Co in 1971. Mint unused 7 Up sign with the Peter Max rainbow!! " "I describe each and every item as accurately as possible, .." - - - There are a number of "pick-up art" images derived from a 1969 image created by John Alcorn for The Seven Up Company as a part of the famous UnCola ad campaign. They can be seen adorning vending machines, illuminated signs, clocks, store displays, pocket patches, stickers and many more items in metal, plastic, fabric and paper. Some are rectangular, some are very long and skinny and others are rounded on top to match the sunrise. Don't just take my word for it, hear it from Max himself: www.pbs.org/wgbh/market-warriors/blog/2012/10/15/peter-ma... Pay particular attention to the left side of the signed billboard and poster versions of the original image entitled "UnCanny In Cans" which are linked below: www.flickr.com/photos/[email protected]/6267760503/in/set-7215... www.flickr.com/photos/[email protected]/5530862208/in/set-7215... Note the following common elements including 2-color alternating rays of light for the sunrise, black edged bands in the rainbow, bordered flowers, pink clouds, the font, choice of color palette and the overall feel of the image. Check out a Pepsi ad by Alcorn, also from 1969. Note the similarities. www.flickr.com/photos/gatochy/287289682/in/[email protected]. Campbell's Soup poster offer by Alcorn, from 1968: www.flickr.com/photos/[email protected]/5989452687/ Radio ad by Milton Glaser, a co-founder of Pushpin Studios from 1966 (several of the UnCola artists (including Alcorn) came through this studio at some point): rare-posters.com/2354.html An untold number of sellers on eBay mistakenly (or blatantly) attribute this artwork to Peter Max who did eventually work on some trippy animated UnCola TV ads in the mid 1970's and an insulated soft-sided cooler, but his work was never selected for the earlier still graphic images commissioned by 7Up. There are conflicting opinions as to whether Max actually submitted entries to the J Walter Thompson Co. for the anonymously judged UnCola ad campaign in 1968 +/-. If so, his work was not selected. If any unsuccessful submissions do, in fact, exist, they would likely reside in the J Walter Thompson Company ad agency archives at Duke University in a box. [hint, hint - some art or advertising student needs to hunt through these boxes and bring them to light, if allowed] Photo graciously supplied by Norm Hathaway, author of Electrical Banana. www.google.com/products/catalog?hl=en&client=firefox-...

This Flowers From 1970 Book - 7up-uncola-hanging-sign-by-john-alcorn-not-peter-max- on net.photos image has 500x303 pixels (original) and is uploaded to . The image size is 61166 byte. If you have a problem about intellectual property, child pornography or immature images with any of these pictures, please send report email to a webmaster at , to remove it from web.