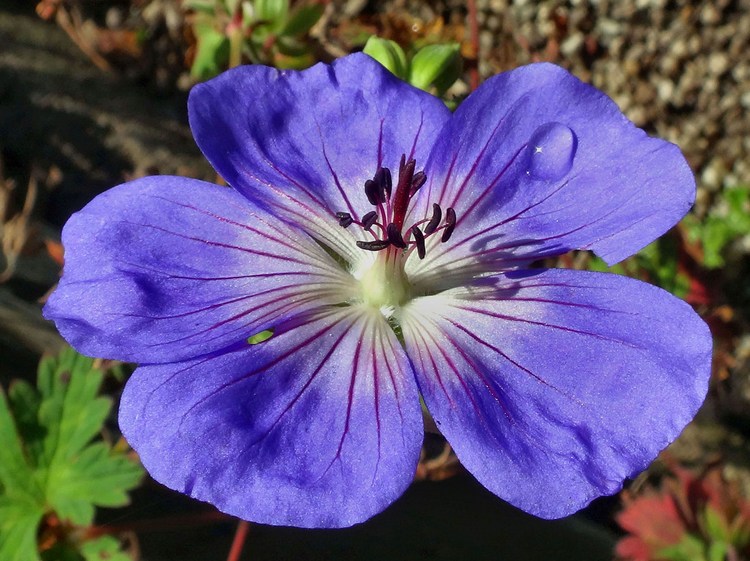 A couple of years ago I posted a photo here on flickr of this same Geranium in the same Garden with a Bumblebee visitor (www.flickr.com/photos/[email protected]/7157516831/in/photolis...). Here it is again in Autumnal Splendor with a single raindrop. In 2005, the journal of the (British) Royal Horticultural Society wrote of this Crane's Bill that 'the nomenclature could not be satisfactorily resolved' and that it is 'much confused in cultivation'. Another possible name than the one I gave earlier is 'Geranium x magnificum Hyl.'. The Hyl. is for the Swedish botanist and mycologist Nils Hylander (1904-1970). He described 'his' hybrid in 1961, hence the abbreviation of 'Hyl.'. I suppose it's fitting to give that name here for a plant growing in a pleasant little botanical garden, the Prinsentuin. Field botanists apparently liked to poke fun at very elegant Hylander, who preferred the lawns of gardens over getting his feet wet in swamps and fields...

This Flowers From 1970 - blue-confusion-geranium-johnsons-blue-prinsentuin-groningen-the-netherlands on net.photos image has 1024x766 pixels (original) and is uploaded to . The image size is 255835 byte. If you have a problem about intellectual property, child pornography or immature images with any of these pictures, please send report email to a webmaster at , to remove it from web.