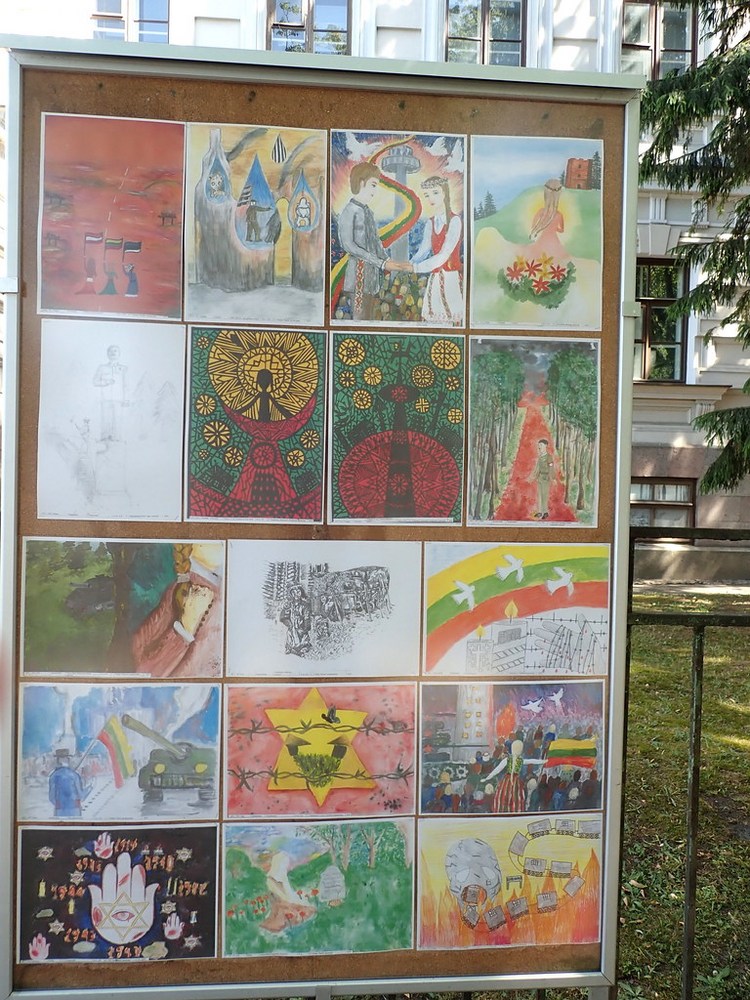 The building behind is the former KGB headquarters, now the Museum of Occupations and Freedom Fights. July 14 is a national day of remembrance; our visit on July 15 caught this exhibit of students’ commemorative artwork. There were over a dozen flats like this one, chock full of talent, creativity and raw emotion. A bloody martyrdom of civilians by Soviet tanks at the television tower figured prominently in the country’s liberation from Soviet rule in 1991, so that appears in some panels. Others evoke the Hill of Crosses, a defiant symbol of faith during the Soviet era, or the Forest Brothers, partisans who fought the Soviet occupation (some for decades). We were touched that quite a few of the artists chose the Holocaust as their theme. Until last year, this was called the Museum of Genocide Victims, but it came under international criticism for focusing on the Soviet victimization of Lithuanians (which, hideous as it was, meets only a somewhat expansive definition of ‘genocide’) while giving short shrift to the Nazi genocide of Jews. Lithuania had been a great center of Jewish culture and learning, but 90% of its 250,000 Jews perished in the Holocaust -- not a few at the hands of Lithuanian collaborators. In 2011 the museum added a small room devoted to the Holocaust; it was well done, but still not a major exhibit. So finally the museum was renamed to better reflect its actual (and worthy) focus: using the bone-chilling KGB prison itself to illustrate the brutality of Soviet rule. Many of the drawings depict the forced relocations to Siberia. Stalin had a vision of the Soviet Union as an ethnically and linguistically homogeneous Greater Russia, and to that end he moved Russians en masse into conquered countries such as the Baltics. That meant he had to move the existing population elsewhere. They became convenient slave labor in the frozen, sparsely populated East. On June 14, 1941 -- a year to the day after the Soviet takeover on June 14, 1940 -- the Soviets began the first of many mass deportations of Lithuanians to Siberia. In total at least 130,000 people, 70% of them women and children, were sent to forced labor settlements, in addition to the 150,000 sent to the prison camps of the gulag — in other words, altogether over 10% of the population. The deportations started with the dissidents, the intelligentsia, the bourgeoisie; but no one was safe. When they ran out of those, they grabbed people off the street to meet their quotas. Men were separated from the women and children during transport. The deportees were sent in cattle cars, often with nothing but the summer clothes on their backs. Sometimes, in later deportations, they would be given 20 minutes to pack. Some families kept bags packed at all times in case they were among the unlucky ones. The estimated total mortality among those sent to labor settlements was 28,000, or over 20%. There’s not a family living today who wasn’t affected, who doesn’t have stories of loved ones taken. Our guide’s grandfather was one of them; like many, he never returned.

This Expansive Worlds - students-commemorative-artworks on net.photos image has 768x1024 pixels (original) and is uploaded to . The image size is 271138 byte. If you have a problem about intellectual property, child pornography or immature images with any of these pictures, please send report email to a webmaster at , to remove it from web.