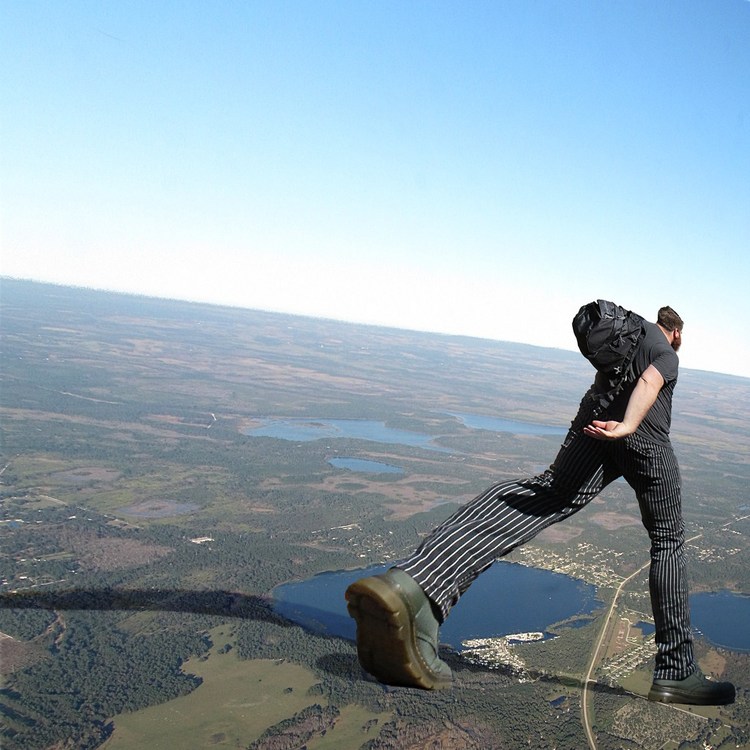 . I like physics, but I love cartoons. -- Stephen Hawking -=- there is only one spaceship 'mother earth.' we share it with those we love, those we despise, and those we are completely indifferent toward. the past has shared it with us, and we are sharing it with the future. in Uganda there is the saying, "Good walking leaves no tracks behind it." we must watch our steps. -=- geek behind the curtain: a candid street shot with the powershot point-and-shoot while out with little E this past weekend. i was so happy with the original pose i caught here i've made more than half-a-dozen completely different versions of this guy. this version with the added background shot taken from a plane a couple years ago was the most unlike anything i've done before. in this one he's been bent and stretched so much he reminds me of the famous cartoon by Robert Crumb, "Keep on Truckin," sometimes played by a guy in a suit, and other times by his character Mr Natural. the main difference is Crumb's character is walking toward the audience while this guy strides away. there was a surfeit of other cliche titles, with different moods -- living large. keep on truckin. johnny appleseed. a swiftly tilting planet. a giant among men. pick on someone your own size. its a small world after all. carbon footprint.

This Expansive Worlds - forced-perspective- on net.photos image has 1024x1024 pixels (original) and is uploaded to . The image size is 224845 byte. If you have a problem about intellectual property, child pornography or immature images with any of these pictures, please send report email to a webmaster at , to remove it from web.