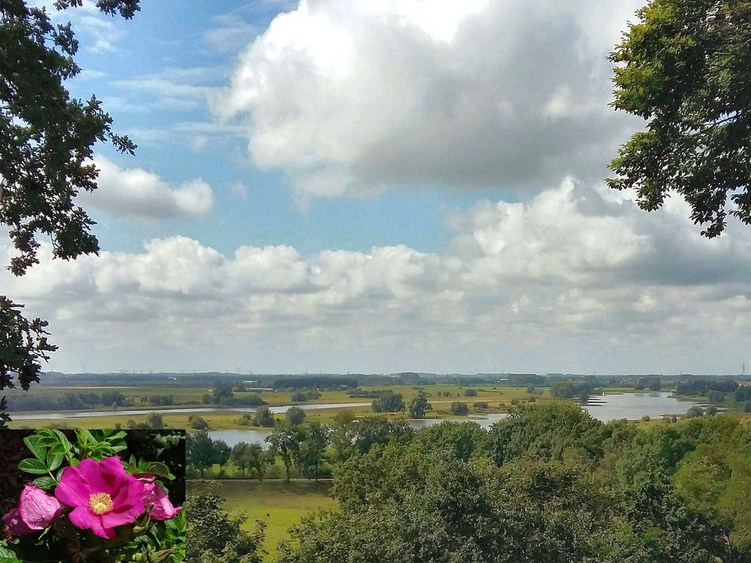 On my way down south I stopped at Ede and then biked towards the Nether Rhine and the town of Wageningen, especially famous as the site of the German surrender of The Netherlands to Prince Bernhard and the Allies in May 1945. I was especially interested in two botanical gardens here, the Arboretum De Dreijen and the Belmonte Arboretum. De Dreijen is the original garden of the Wageningen University which expansively acquired Belmonte in 1951. This photo was taken from Belmonte's hill, overlooking the Nether Rhine. Belmonte was founded by Thierry Juste (Auguste), baron de Constant Rebecque de Villars (1786-1867) in 1845. 'Monte' is a rather fancy name for the slightly undulating hill on which it's situated; yet it is indeed pretty. Apparently in the mind of the denizens of this town it's considered quite a height. Asking for directions, I was looked at sceptically and someone said it was a stiff climb for my bike day-rented from the Dutch Railways. There below is the meandering, crinkly Nether Rhine. Fittingly this late inset Rosa rugosa, Japanese Rose, in the now almost entirely green Rose Garden. In English it also goes by the name Crinkly - for 'rugosa' - Rose.

This Expansive Worlds - crinkled-river-nether-rhine-from-belmonte-and-japanese-rose-rosa-rugosa-wageningen-the-netherlands on net.photos image has 1024x768 pixels (original) and is uploaded to . The image size is 217446 byte. If you have a problem about intellectual property, child pornography or immature images with any of these pictures, please send report email to a webmaster at , to remove it from web.