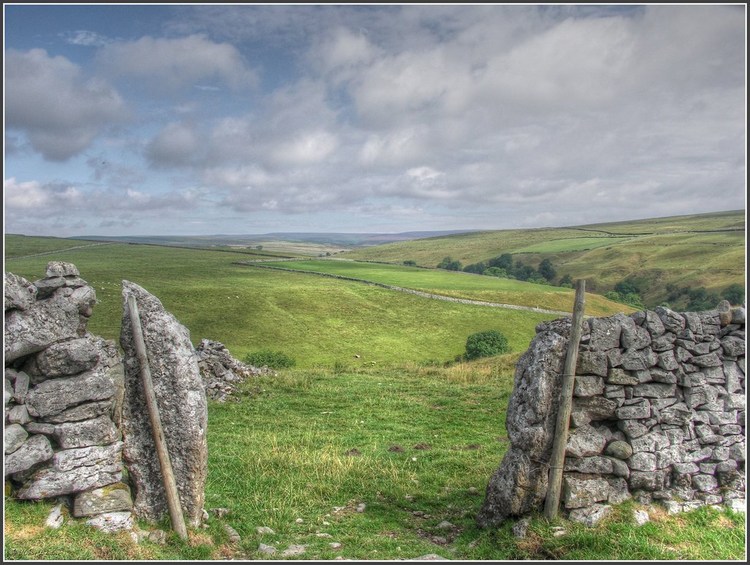 Yorkshire Dales National Park is an expansive area of hill country that rises in the Millstone Grit-capped Three Peaks to over 2,300ft (700 metres). Rivers have cut deep valleys (dales) of which there are over 20 named examples, each distinctive in character and atmosphere. The south of the National Park displays one of the best examples in Britain of classic limestone (Karst) scenery, with its crags, pavements and extensive cave systems. The area's northern landscape is equally striking. Its valleys with distinctive stepped profiles, the product of differential weathering of the Yoredale Series, are separated by extensive moorland plateaux. To the west are The Howgills, a series of grassy rounded hills with deep ravines that result from different geology and contrast markedly in appearance from the rest of the National Park. This is a landscape shaped by ice, with significant glacial and post-glacial landforms and features, notably drumlin fields such as that at Ribblehead, erratics including those at Norber, moraines and post-glacial lakes of Semerwater and Malham Tarn.

This Expansive - yorkshire-dales-above-burnsall on net.photos image has 1024x771 pixels (original) and is uploaded to . The image size is 237767 byte. If you have a problem about intellectual property, child pornography or immature images with any of these pictures, please send report email to a webmaster at , to remove it from web.