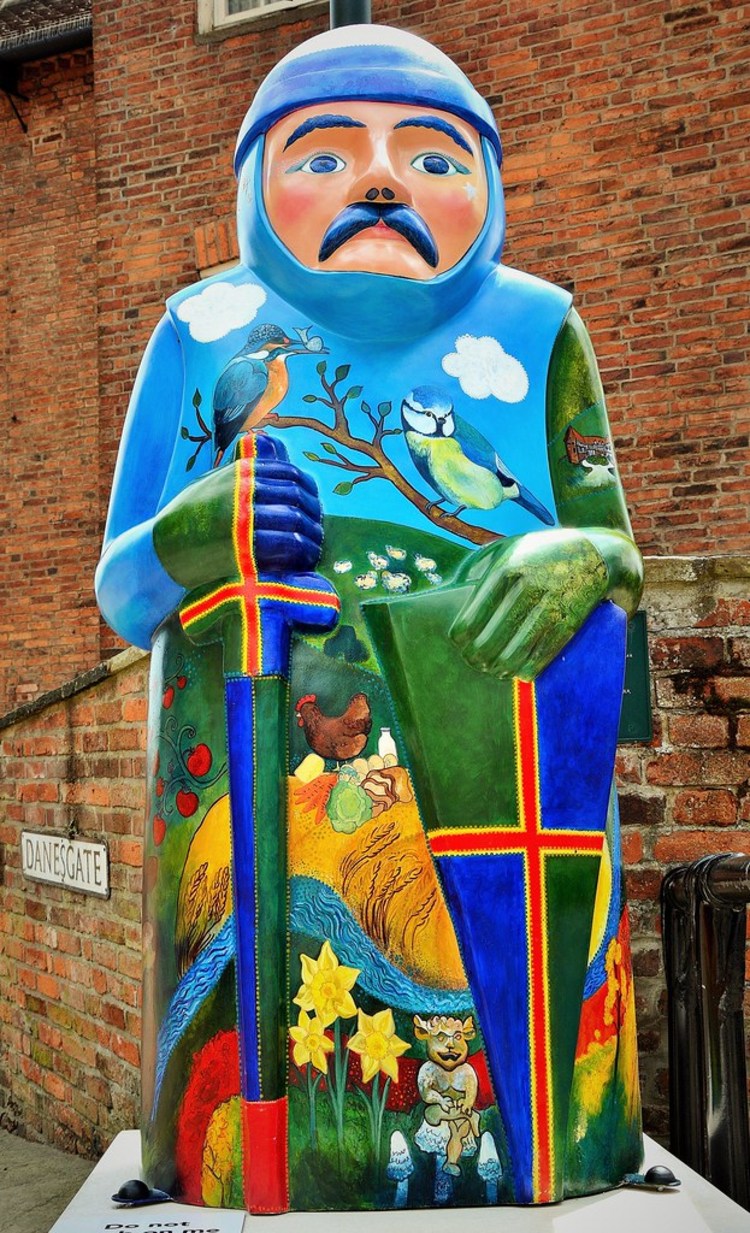 An Expansive Place Baron, designed by Lizzy Mason, it is part of the Lincoln Baron's Charter Trail part of the 800th anniversary celebrations of the Magna Carta. It is located at on Steep Hill, at its junction with Danesgate. Almost exactly 800 years since King John put his seal to Magna Carta, Lincoln welcomes a reincarnation of the 25 Barons who signed the charter onto the city’s streets. The Trail sees 25 2m-tall sculptures decorated by renowned artists from Lincolnshire and beyond. Local businesses and organisations have worked with the artists to devise a different theme for each Baron. The finished sculptures will be placed around the city centre, creating a colourful and fun trail for visitors to follow. The Barons were on display from the June 13th for three months before being auctioned with all proceeds from the sales donated to The Trussell Trust, the national food bank charity, which also helps people facing hardship in Lincoln. This Baron represents Richard de Percy who was a member of the powerful Percy family from the north of England. He joined the revolt against King John after Magna Carta and had all his lands confiscated, but he got them all back after making peace with King Henry III after the death of King John. He died in 1244 and was buried in Whitby Abbey. Lizzy Mason stated that "Life is art, an expression of the joy of life through our connection to source, light, love, a higher self. An abundant well of ever flowing loving source of power and self realisations of our true self, an inner light capable of infinite expressions of life." This Baron is sponsored by BBC Radio Lincolnshire who were very proud of their Lincolnshire themed baron, with his design of wide blue skies, the Lincolnshire flag, and many details of local life.

This Expansive - 28528 on net.photos image has 623x1024 pixels (original) and is uploaded to . The image size is 273336 byte. If you have a problem about intellectual property, child pornography or immature images with any of these pictures, please send report email to a webmaster at , to remove it from web.