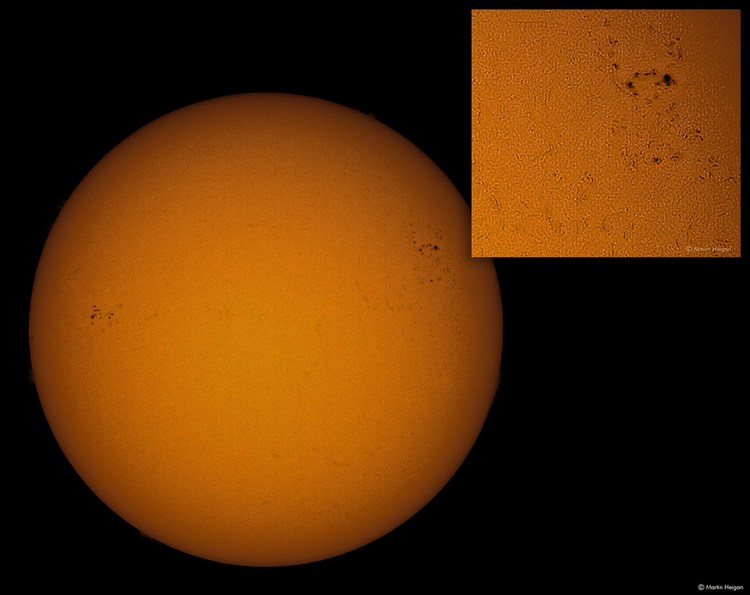 The surface granulation of the Sun

Note: The image is not at full resolution, but because of the fine detail, it is best viewed as LARGE as possible. Zoom in and out by clicking on the image. WARNING: Don't look at the Sun though a Telescope's Eyepiece or Finder Scope without protective Solar filters, as it can cause permanent eye damage. The same applies when you use a camera, and look through the Camera's Eyepiece. If at all possible, rather look at the Sun in Live View on the Camera's LCD Screen. About this photo: This is a photograph of the surface of the Sun (mostly in the wavelengths of visible light, and the H-Alpha (Ha) Infrared (IR) spectral line of Hydrogen at 656.28 nm). Over 99.999% of the light was blocked with a R-G "White Light" Solar filter. Sunspots, granulation and filaments are visible due to the use of an additional Baader Planetarium Solar Continuum filter (passing a narrowband spectral wavelength of light at 540 nm). This image was created by Stacking several High Dynamic Range RAW images, that were photographed with a Canon 60Da DSLR, on a 6" wide field Newtonian Reflector Telescope (Astrograph). About Sunspots: The dark spots are cooler holes in the Sun's Photosphere and are called Sunspots. The Photosphere has a temperature of 5,800 degrees Kelvin, and Sunspots have temperatures of about 3,800 degrees K. Sunspots only appear to be dark, as they are surrounded by much brighter and hotter regions of the Sun's Photosphere. With the use of extreme narrowband Hydrogen-Alpha Solar filters, Ca K-Line filters, and other wavelengths of light like Ultraviolet (UV), the detail of the Sun's surface, prominences and solar flares will be far more apparent. About the Sun: The Sun is a G-type Main-Sequence Yellow Dwarf (G2V) Star. As far as stars go, the Sun is a very average star in the middle of its life cycle (around 5 billion years old). To give an indication of the Sun's size, about 1.3 million Earth sized planets can fit into the volume of the Sun. Through the process of fusion, the Sun burns approximately 600 million tonnes (metric tons) of Hydrogen each second, turning it into 596 million tonnes of Helium. As the Hydrogen nuclei fuse, Photons are emitted, which in short is why the Sun and other stars shine. The Sun is roughly 150,000,000 km (93,205,679 mi) from Earth. The speed of light is 300,000 km/sec (186,000 miles/sec), which means that the light took just over 8 light-minutes (8 minutes and 26 seconds) to reach my Telescope. The mass of the Sun is about 2 Nonillion kilograms: M☉ = (1.98855±0.00025) × 10^30 kilograms or 10^27 metric tons, and is referred to as 1 Solar Mass. The Sun contains 99.86% of the mass in our Solar System. About Hydrogen and the Chemical Elements: The Hydrogen Atom is the simplest and most abundant element in the Universe (with only 1 Proton and 1 Electron). Through the process of fusion, more complex elements are made at different stages of a star's life and death cycle. This is what Carl Sagan meant with one of his well known quotes from Cosmos, "The nitrogen in our DNA, the calcium in our teeth, the iron in our blood, the carbon in our apple pies were made in the interiors of collapsing stars. We are made of starstuff." About the Milky Way, and our Solar System's place within it: The Milky Way Galaxy is estimated to have over 400 billion stars. Stars are suns, and just like in our Solar System, many of the stars have planets with moons orbiting them. Our sun is a middle aged Yellow Dwarf star, located in the Orion Arm (or Orion Spur) of the Milky Way Galaxy. It's a minor side spiral arm, located between two larger arms of the Milky Way Galaxy's spiral. The Milky Way is merely one mid-sized barred spiral Galaxy, amongst over 100 billion other Galaxies in the observable Universe. When we look up at the night sky from Earth, we see a glimpse of the Carina-Sagittarius Arm of the Milky Way Galaxy. It takes about 250 million years for the Milky Way Galaxy's spiral arms to complete one rotation. The size, distance and age of the Universe is far beyond human comprehension. The known Universe is estimated to contain over One Billion Trillion stars. 1 000 000 000 000 000 000 000 Click on this link to view an image that illustrates ''our Solar System's position within the Milky Way Galaxy''. View the spectacular images and videos captured in several wavelengths of light with the NASA Solar Dynamics Observatory. This image was published in Astrophotography Ezine - Issue 23. Martin - [Home Page] [Photography Showcase] [My Free Photo App] [Flickr Profile] [Facebook] [Twitter] [My Science & Physics Page]

This Education Galaxy - the-surface-granulation-of-the-sun on net.photos image has 1024x813 pixels (original) and is uploaded to . The image size is 146452 byte. If you have a problem about intellectual property, child pornography or immature images with any of these pictures, please send report email to a webmaster at , to remove it from web.