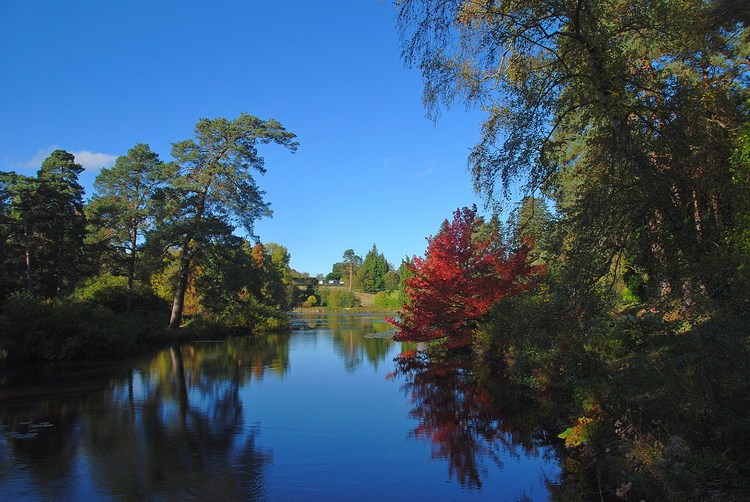 Reflecting on a Beautiful Autumnal Day at Bedgebury Pinetum

Bedgebury National Pinetum at Bedgebury, Kent, in the United Kingdom, is a recreational and conservational arboretum and, with the National Arboretum at Westonbirt, comprises the UK National Arboreta. It was established as the National Conifer Collection in 1925 and is now recognised as the most complete collection of conifers on one site anywhere in the world. The collection has over 10,000 trees growing across 320 acres (1.3 km2), including rare, endangered and historically important specimens. Bedgebury National Pinetum conducts conservation work and is home to some 56 vulnerable or critically endangered species and houses five NCCPG National Plant Collections. Bedgebury is first mentioned in an Anglo-Saxon charter in AD 841, the name deriving from the Old English bycgan, meaning "buy", and the Kentish vecge, meaning "to bend or turn", possibly in reference to a stream. John de Bedgebury is listed as the earliest resident of Bedgebury, in the time of Edward II. In the 15th century Agnes de Bedgebury, sister and heir of John (died 1424) married John Colepeper, whose Colepeper heirs, financed by mining clay-ironstone on the estate, were resident until at the time of the restoration of Charles II, and who created an ornamental park on the Bedgebury estate. Elizabeth I visited in August 1573. The current house was built in 1688 for Sir James Hayes, a little apart from the old house. The estate later passed to the Stephenson family, who retained it until it was left to a Miss Peach, who sold it in 1789 to John Cartier, Governor of Bengal and High Sheriff of Kent, who improved the plantings and the house. In the 1840s Viscount William Beresford developed the estate by creating the village of Kilndown and three lodges, one of which – Keepers Lodge, now known as Park House – became the centre of the Pinetum. Beresford initiated the pinetum in the 1850s and his successor, his stepson Alexander Beresford Hope, developed Lady Mildred's Drive to enable visitors in carriages to view the trees. The estate was sold in 1899 to Isaac Lewis, who allowed the collection to fall into neglect, and it was purchased by the Crown Estate in 1918 for its marshy land and drier ridges, as well as its streams, lakes and valleys. In 1919, the house was bought by the Church Education Corporation to operate as a school. The school closed in 2006. The Royal Botanic Gardens at Kew and the Forestry Commission established the site as The National Pinetum in a joint venture in 1924, as the National Conifer Collection, because air pollution was rendering London unsuitable for growing conifers. A site at the southern end of Bedgebury Park was chosen, centred on Marshall's Lake and a stream-filled valley. The first plants for the pinetum were raised at Kew Gardens in 1921 and transferred to Bedgebury in 1925 and 1926, alongside Viscount Beresford's existing plantings. Development of the collection was managed by the Kew botanist William Dallimore, a world-renowned expert on conifers. In 1969 management of the pinetum reverted solely to the Forestry Commission, who extended it in 1977 and created two new lakes. In the Great Storm of 1987 almost a quarter of the trees were brought down. The aim of Bedgebury National Pinetum is "to grow as many species of conifers as the climatic conditions will allow, planted in generic groupings, using geographically associated plantings where possible." (W. Dallimore, 1923) The pinetum holds 10,000 specimens of conifers and other species that grow in temperate zones, including 7,000 trees, as living gene banks and as a genetic resource for future restoration programmes. It holds 2,300 different species of conifer, specimens of which include the tallest tree in Kent (Abies grandis) and the three tallest Leyland Cypresses in the UK. The plan is for the pinetum to provide a mix of 70% conifers to 30% broadleaves, and to leave 40% of the site open to provide vistas and allow the trees to be appreciated. Bedgebury National Pinetum is home to six NCCPG National Plant Collections: Yew, Juniper, Thuja, Lawson's Cypress, Leyland Cypress and Cryptomeria japonica. The collection contains 56 species that have been officially declared vulnerable or critically endangered. The scale and quality of Bedgebury National Pinetum's conifer collection have made it an ideal site to take part in the International Conifer Conservation Programme (ICCP), run by the Royal Botanic Garden Edinburgh. The ICCP aims to promote the conservation of conifers through conservation work, research and education, and work carried out at Bedgebury makes up part of the effort to conserve the genetic diversity of conifers, particularly those from temperate forests. The Bedgebury Conifer Conservation Project, initiated in 2007, is designed to use redundant forest plots to grow large numbers – up to 500 – of endangered conifers to provide an ex-situ genetic resource. The first plots were planted with Chilean plum yew by Boy Scouts celebrating their centenary in 2007, and future plantings will include samples from Europe, Asia, North America and Australasia. Bedgebury nursery was the first to germinate Vietnamese golden cypress (Xanthocyparis vietnamensis) and chichibu birch (Betula chichibuensis) seeds in cultivation. For further information please visit en.wikipedia.org/wiki/Bedgebury_National_Pinetum and www.forestryengland.uk/bedgebury

This Education Galaxy - reflecting-on-a-beautiful-autumnal-day-at-bedgebury-pinetum on net.photos image has 1023x685 pixels (original) and is uploaded to . The image size is 255572 byte. If you have a problem about intellectual property, child pornography or immature images with any of these pictures, please send report email to a webmaster at , to remove it from web.