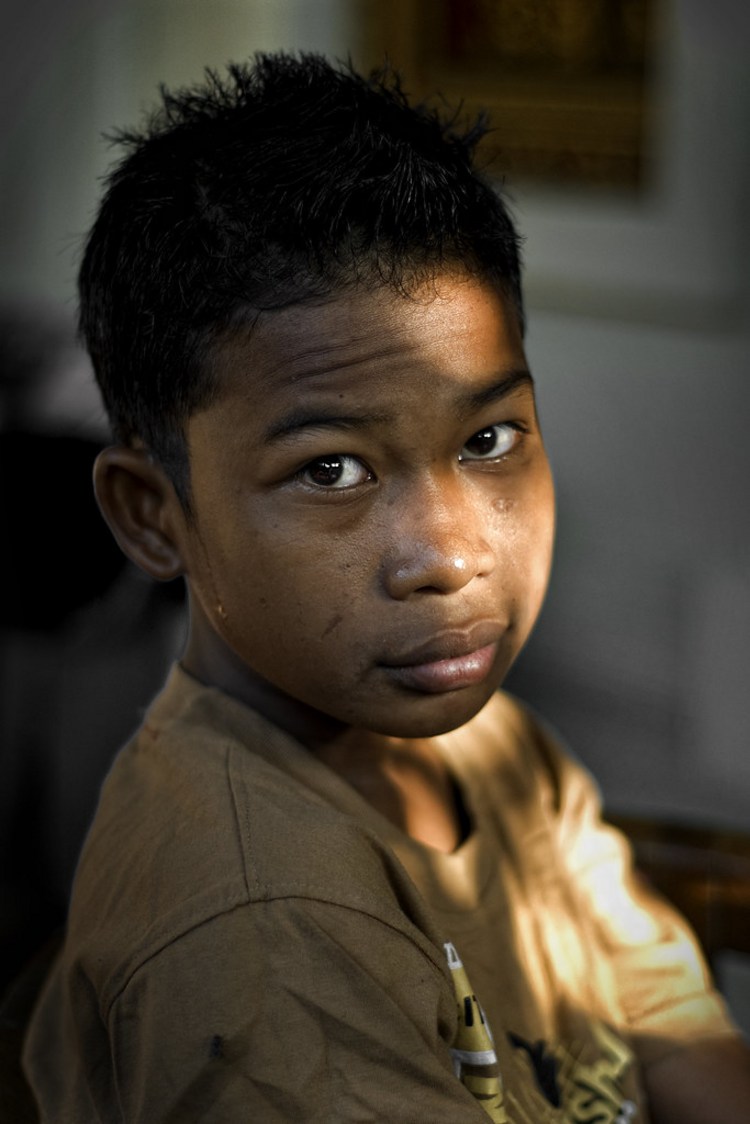 Akku was 11 year old when he ran away from his father who beat him regularly with chains. He ran some 20km from his home and hide in a village called Tanjong Alang. Sapri another 11 year old provided Akku refuge and convinced his mother to let Akku stay in their house. Since then these two boys have become more than friends. They are brothers! Sapri is a little beggar boy. His father is a visual handicap and mother has no education and the family depends on begging and ad-hoc jobs to survive. Yet they received Akku into their family and sheltered him from his tyrant father. They have very good hearts. Akku’s mother received constant abuse from the husband too and she decided to leave him and look for Akku. It took almost a year to locate Akku. But I am not sure if it was a good thing to be reunited. I adopted Sapri and Akku 2 years ago. I enrolled them into Care For Children Foundation (YRAB) and my first priority was to provide the boys accommodation and educational needs. However, Sapri’s addiction in glue sniffing forced me to send him back to his parents. He dropped out of school in less than 4 months. Akku, on the other hand did fantastic well. He was the kind of student every teacher wants as he was hardworking, intelligent and well mannered. Even the principal, who is the head of YRAB loves him. We managed to keep him in school for about a year until Akku’s mother found him. Akku suddenly dropped out of school and behaved strangely. He lied to us many times about dropping out and claimed that he has no interest in further education. Since then he stays with his mother and kept moving houses as the mom could not afford to pay for the rental. Not long after Akku worked in the building construction with Sapri. That worried me most! They were just little boys and should not be working in such harsh environment. I could not convince them; especially Akku needed the money for his mother. Akku loves his mother dearly and will do whatever to protect his mom. Lately, I found out that his mother works as a prostitute and Akku is trying to hide the truth from us. The boy is sad but what can he do? This is something he cannot share with me nor wanted me to know. But, I understand his suffering and I understand why he dropped out of school. He does not want anyone to know about his mother’s profession and he just want to work to supplement income for his mother. Unfortunately, few days ago Akku’s father found him. He dragged the 13 year old away (or you can say it is kidnapping) and threaten the wife that he would kill her and beat Akku badly if she tries to bring Akku back. The mother said Akku was crying and asked the mother to let him be with his father. Akku was afraid that his father would beat his mother and thus shielding her. But the father forced Akku to work in a construction site with him and doing the hard labor work of an adult. He wanted money! It is said that the boy was crying and in pain from the labor. I worry of his life. I managed to contact the mother yesterday night. She is planning to rescue Akku and take him away under the nose of his father from the construction site. I advised her to report the case to the head of Care For Children Foundation and make a police report for child abuse. But I feel that she would not do so as she is afraid. The poor always afraid of higher authority such as, police who is seen as corrupted and unhelpful. All in her mind is just running away and hiding somewhere. Today, Akku’s mother will be trying to rescue the boy from construction. I really hope she heed my advice.

This Education Authority Jobs - my-adopted-son-akku on net.photos image has 683x1024 pixels (original) and is uploaded to . The image size is 113338 byte. If you have a problem about intellectual property, child pornography or immature images with any of these pictures, please send report email to a webmaster at , to remove it from web.