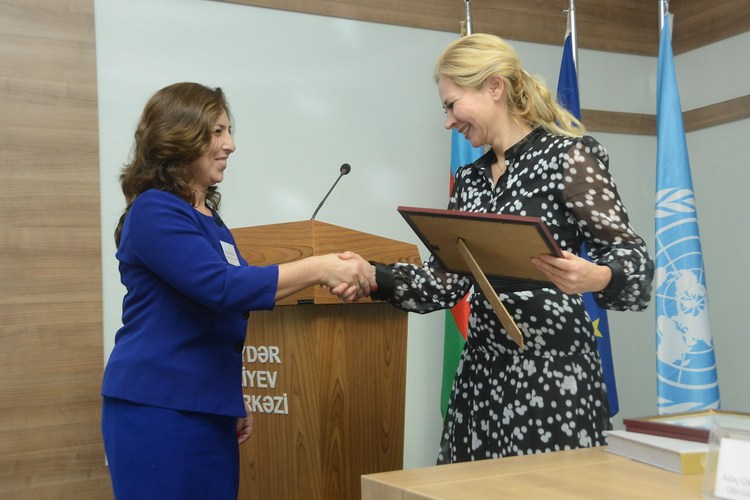 A new women resource center was opened in Bilasuvar as part of the of the joint project funded by the European Union and the United Nations Development Programme (UNDP), and implemented by the State Committee for Family, Women and Children Affairs of the Republic of Azerbaijan, UNDP and Women’s Association for Rational Development. Opening Bilasuvar Women Resource Centre is the first result under this project. The aims of this centre are to help women strengthen their presence in community life. It will serve as a public platform to plan and coordinate women’s economic and social initiatives, and provide different opportunities for capacity building, entrepreneurial activity, vocational education, and creative self-expression. Welcoming officials and participants in Bilasuvar city, the head of Executive Authority, Mr. Mahir Guliyev stressed the importance of the women resource centre in supporting women in both Bilasuvar and surrounding villages. To this date, the Women Resource Centres have mobilized 416 women members, facilitated training for over 350 women, helped starting or improving more than 50 women-led businesses, and reached over 450 children, women and men in awareness-raising campaign on violence and gender issues. For the past decade, the Government of Azerbaijan has collaborated with all interested stakeholders to bring the concerns and issues of women to the forefront of different areas of economic and social policies. Ms. Hijran Huseynova, a Chairperson of the State Committee expressed her willingness to continue and strengthen this partnership, and open such support centres throughout the country. The opening ceremony of Bilasuvar Women Resource Centres took place during the 16 Days of Activism Campaign against Gender-based Violence, which is held in the country between 25 November and 10 December together with many partners including the EU Delegation, UNDP, and State Committee for Family, Women and Children Affairs. This Campaign advocates for the action to end violence against women and girls everywhere. UNDP Resident Representative, Mr. Ghulam M. Isaczai expressed his hope during his speech that such centres in Bilasuvar and other regions would be the grassroots-level champions raising awareness about the negative impacts of gender-based violence beyond the time limits of international campaigns. “Today’s event celebrates only one of the first results of our joint project, but this collaboration will also help Azerbaijan to contribute to a number of Sustainable Development Goals, particularly the SDG 5 on achieving gender equality and empowering all women and girls, SDG 8 on ensuring inclusive economic growth, full and productive employment and decent work for all, and SDG 10 on reducing inequality within and among countries.” – Mr. Isaczai mentioned. "The Centre will help to promote the important role of women as active members of the society and increase many possibilities of good support structures for female participation in various fields" – Ms. Malena Mard, EU Ambassador highlighted in her speech during the opening ceremony. After the opening ceremony, thirteen local women were awarded with certificates to launch their businesses under the project. Ms. Mansura Shahveranova, who was one of awarded beneficiaries, described how she benefitted from the project during presentation of certificate ceremony. “Before the project, I had some ideas, but I couldn’t realize them. Thanks to this project, I will be able to launch my own business and at the same time I will also be able to provide job opportunities to three other people,” she said.

This Education Authority Jobs - bilasuvar-women-resource-center-opened on net.photos image has 1024x683 pixels (original) and is uploaded to . The image size is 131751 byte. If you have a problem about intellectual property, child pornography or immature images with any of these pictures, please send report email to a webmaster at , to remove it from web.