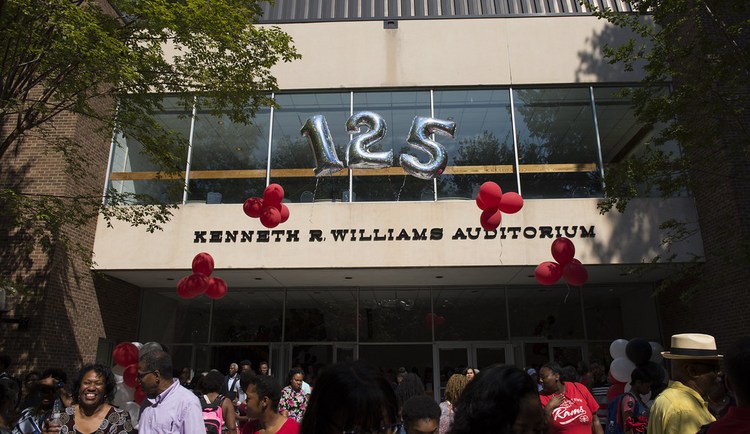 Winston-Salem State University was founded as the Slater Industrial Academy by Simon Green Atkins on September 28, 1892. Atkins had an audacious vision to create an institution where every student would meet the challenges of the day equipped with an education designed to intellectually prepare the “head, hand, and heart.” Twenty-five students attended classes in a one-room frame structure and were taught by a single instructor. In 1925, the General Assembly of North Carolina recognized the school’s curriculum above high school, changed its name to Winston-Salem Teachers College, and empowered it under authority of the State Board of Education to confer appropriate degrees. Winston-Salem Teachers College thus became the first black institution in the nation to grant degrees for teaching the elementary grades. In response to a growing medical community emerging in the Winston-Salem area, the School of Nursing was established in 1953, awarding graduates the degree of Bachelor of Science. In recognition of the university’s growing curriculum and expanding role, the North Carolina General Assembly of 1963 authorized changing the name from Winston-Salem Teachers College to Winston-Salem State College. A statute designating Winston-Salem State College as Winston-Salem State University received legislative approval in 1969, and in 1972, Winston-Salem State University became one of the 16 constituent institutions of the University of North Carolina, subject to the control of a Board of Governors. Since its founding in 1892, Winston-Salem State University has grown from a one-room frame structure to more than 39 buildings located on a picturesque 117-acre campus overlooking the woodlands of Salem Lake in the heart of Winston-Salem. The university is now number one in the UNC system for North Carolina job placement for graduates and number one in the UNC system for the average salary for triad-area graduates. It is home to an award-winning student activities center, top 25 division II football, basketball and baseball programs, and offers students 100-plus student organizations. With a faculty-to-student ratio of 16:1, the university enrolls approximately 5,000 students and offers more than 40 bachelor’s programs, 9 master’s programs, two professional doctoral programs, and two certificate programs. Through the Division of Lifelong Learning, opportunities abound for non-traditional students to pursue studies through evening-weekend, summer, distance learning, and continuing education classes.

This Education Authority Jobs - 20170928celebration125th015ed on net.photos image has 1023x592 pixels (original) and is uploaded to . The image size is 202944 byte. If you have a problem about intellectual property, child pornography or immature images with any of these pictures, please send report email to a webmaster at , to remove it from web.