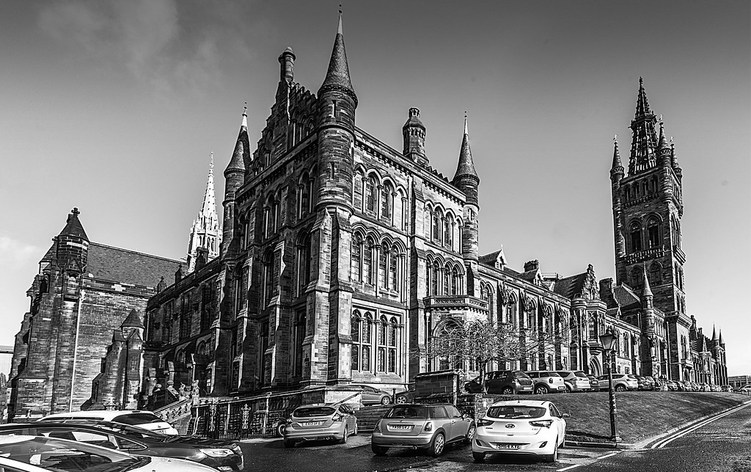 The University of Glasgow is the fourth oldest university in the English-speaking world and one of Scotland's four ancient universities. It was founded in 1451. Along with the University of Edinburgh, the University was part of the Scottish Enlightenment during the 18th century. It is currently a member of Universitas 21, the international network of research universities, and the Russell Group. In common with universities of the pre-modern era, Glasgow originally educated students primarily from wealthy backgrounds, however it became a pioneer in British higher education in the 19th century by also providing for the needs of students from the growing urban and commercial middle class. Glasgow University served all of these students by preparing them for professions: the law, medicine, civil service, teaching, and the church. It also trained smaller but growing numbers for careers in science and engineering. Originally located in the city's High Street, since 1870 the main University campus has been located at Gilmorehill in the West End of the city. Additionally, a number of university buildings are located elsewhere, such as the Veterinary School in Bearsden, and the Crichton Campus in Dumfries. Alumni or former staff of the University include philosopher Francis Hutcheson, engineer James Watt, philosopher and economist Adam Smith, physicist Lord Kelvin, surgeon Joseph Lister, 1st Baron Lister, seven Nobel laureates, and two British Prime Ministers. And now a wee history lesson. The University of Glasgow was founded in 1451 by a charter or papal bull from Pope Nicholas V, at the suggestion of King James II, giving Bishop William Turnbull, a graduate of the University of St Andrews, permission to add a University to the city's Cathedral. It is the second-oldest university in Scotland after St Andrews and the fourth-oldest in the English-speaking world. The universities of St Andrews, Glasgow and Aberdeen were ecclesiastical foundations, while Edinburgh was a civic foundation. As one of the Ancient Universities of the United Kingdom, Glasgow University is one of only eight institutions to award undergraduate master's degrees in certain disciplines. The East Quadrangle of the Main Building. The University has been without its original Bull since the mid-sixteenth century. In 1560, during the political unrest accompanying the Scottish Reformation, the then chancellor, Archbishop James Beaton, a supporter of the Marian cause, fled to France. He took with him, for safe-keeping, many of the archives and valuables of the Cathedral and the University, including the Mace and the Bull. Although the Mace was sent back in 1590, the archives were not. Principal Dr James Fall told the Parliamentary Commissioners of Visitation on 28 August 1690, that he had seen the Bull at the Scots College in Paris, together with the many charters granted to the University by the monarchs of Scotland from James II to Mary, Queen of Scots. The University enquired of these documents in 1738 but was informed by Thomas Innes and the superiors of the Scots College, that the original records of the foundation of the University were not to be found. If they had not been lost by this time, they certainly went astray during the French Revolution when the Scots College was under threat. Its records and valuables were moved for safe-keeping out of the city of Paris. The Bull remains the authority by which the University awards degrees. Teaching at the University began in the chapterhouse of Glasgow Cathedral, subsequently moving to nearby Rottenrow, in a building known as the "Auld Pedagogy". The University was given 13 acres of land belonging to the Black Friars (Dominicans) on High Street by Mary, Queen of Scots, in 1563. By the late 17th century, the University building centred on two courtyards surrounded by walled gardens, with a clock tower, which was one of the notable features of Glasgow's skyline, and a chapel adapted from the church of the former Dominican (Blackfriars) friary. Remnants of this Scottish Renaissance building, mainly parts of the main facade, were transferred to the Gilmorehill campus and renamed as the "Pearce Lodge", after Sir William Pearce, the shipbuilding magnate who funded its preservation. The Lion and Unicorn Staircase was also transferred from the old college site and is now attached to the Main Building. John Anderson, while professor of natural philosophy at the university, and with some opposition from his colleagues, pioneered vocational education for working men and women during the industrial revolution. To continue this work in his will he founded Anderson's College, which was associated with the university before merging with other institutions to become the University of Strathclyde in 1964. In 1973, Delphine Parrott became its first woman professor, as Gardiner Professor of Immunology. In October 2014, the university court voted for the University to become the first academic institution in Europe to divest from the fossil fuel industry.

This Education Authority Careers - glasgow-university on net.photos image has 1024x644 pixels (original) and is uploaded to . The image size is 232426 byte. If you have a problem about intellectual property, child pornography or immature images with any of these pictures, please send report email to a webmaster at , to remove it from web.