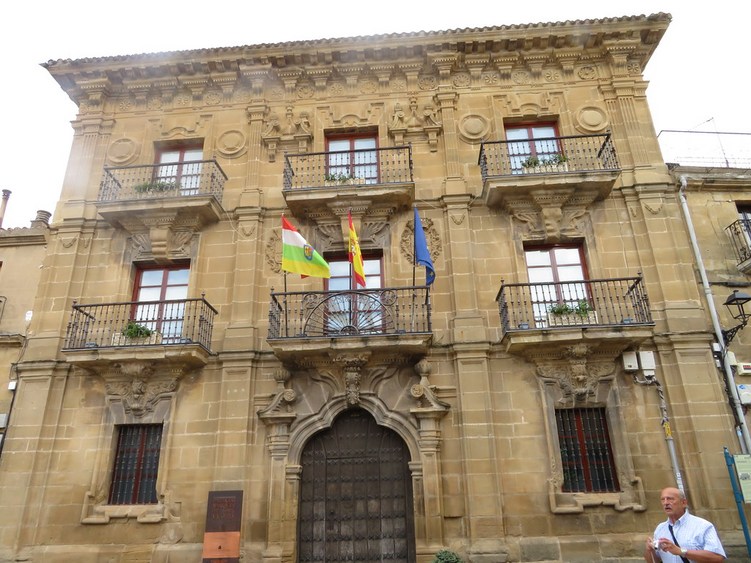 The Palace of the Marqués de San Nicolás in Briones is a characteristic building of the civil baroque architecture of La Rioja in the 18th century, built in stone, with the main facade to the Plaza Mayor decorated with fallen leaves, shells, rockery and broken moldings adorning the gaps, and another facing a different direction with the same distribution but with a simpler decoration. It was built by Ignacio Elejalde at the request of D. Esteban de Francia and was completed in 1755 according to the date that appears on the main balcony. In 1776 he inherited from his uncle the title of Marqués de San Nicolás and then incorporated the repeated shield on the Cross of Santiago. In the last century, when the Marquis was appointed mayor, the municipal offices were transferred to his house and with time the City Council of Briones was finally established in it. At present, the Palacio del Marqués de San Nicolás is owned by the Autonomous Community of La Rioja and after a thorough restoration carried out by the Ministry of Culture that ended in 1996, it was inaugurated on August 14, 2007 as the Ethnology Section of the Museum of La Rioja with the name "La Casa Encantada". en.wikipedia.org/wiki/Briones,_La_Rioja

This Community Shield 2021 - the-enchanted-house-plaza-de-espa-a-briones-la-rioja-spain on net.photos image has 1024x768 pixels (original) and is uploaded to . The image size is 222697 byte. If you have a problem about intellectual property, child pornography or immature images with any of these pictures, please send report email to a webmaster at , to remove it from web.