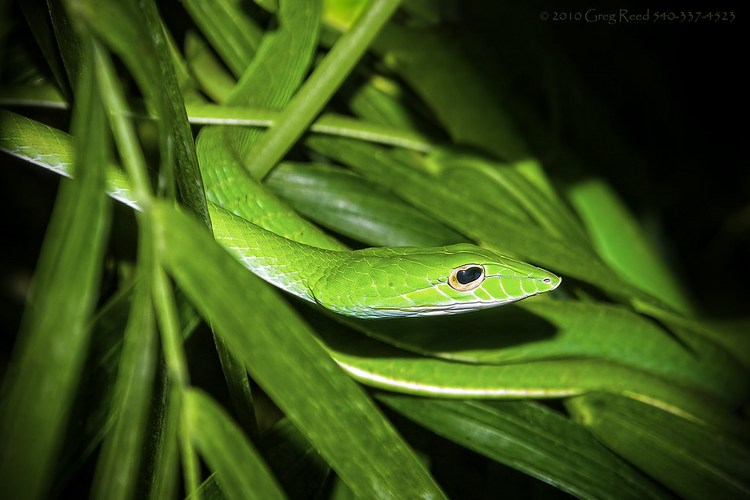 Oriental whip snake Ahaetulla prasina, Heinrich Boie, 1827 (In Thai: งูเขียวหัวจิ้งจก, ngu khieow hua jingjok) Ahaetulla prasina is a species of snake in the family Colubridae native to southern Asia. Its common names include Asian vine snake, Boie's whip snake, Gunther's whip snake, Oriental whip snake (Thai: งูเขียวหัวจิ้งจก) . Description The body form is extremely slender with a long, pointed, projecting snout which is rather more than twice as long as the eye. Adult colouration varies from light brown to dull yellow-green and often a startling fluorescent green. The type and number of scales is used to identify the snakes. In this species the Internasals are usually in contact with the labial or lip scales. There are one to four small loreals between the prefrontal and the labial scales. The frontal is as long as its distance from the end of the snout or a little longer and a little longer than the parietal scales. There is one preocular scale in front of the eye, which is in contact with the frontal scale. There two postocular scales (behind the eyes). The temporal scales come in patterns of 2+2 or 3+3, rarely 1+2. Of the upper labial scales, the ninth, fourth, fifth, and sixth enter the eye while the 4 lower labials are in contact with the anterior chin-shields, which are shorter than the posterior chin-shields. The scales in 15 rows and are usually faintly keeled on the sacral\\ region. There are 203-234 Ventral scales which are anal divided. There are 167 to 203 subcaudals which are bright green, pale olive, or grey-brown, with a yellow line along each side of the lower parts. The interstitial skin of the neck is black and white. Adults may attain 1.8 m (6 feet) in total length, with a tail 0.6 m (2 feet) long. Its appearance is very much like those of South American vine snakes. It is a rear-fanged species and is mildly venomous but is not considered a threat to humans. Distribution This snake has a wide distribution in Asia, where it occurs in Bangladesh, Bhutan, Brunei, Burma, Cambodia, China, India, Indonesia, Laos, Malaysia, Philippines, Singapore, Thailand, and Vietnam. Diet The Asian vine snake feeds on small reptiles and amphibians, particularly lizards and tree frogs. In captivity In recent years, it has entered the pet trade and has become quite popular among hobbyists. Subspecies Four subspecies are recognized, including the nominate race. Ahaetulla prasina medioxima Lazell, 2002 Ahaetulla prasina preocularis (Taylor, 1922): Philippine Islands, including Sulu Archipelago, Panay, Luzon. Ahaetulla prasina prasina (Boie, 1827) Ahaetulla prasina suluensis Gaulke, 1994: Philippine Islands, Sulu Archipelago Source: www.thainationalparks.com/species/ahaetulla-prasina Monterey Bay Aquarium The Monterey Bay Aquarium was a vision that turned into a reality. One day in 1977, four marine biologists at Stanford University's Hopkins Marine Station were once again contemplating a dilapidated building just a few hundred feet away. Someone said “aquarium,” and the rest is history. Our building stands on the site of historic Cannery Row’s largest fish-packing plant, the Hovden Cannery. Built in 1916, the Hovden Cannery operated until 1972, and was the last of the canneries to close. Demolition of the abandoned building began in 1980, and construction of the Aquarium began shortly after, in spring of 1981. We opened to the public on October 20, 1984 and brought the fish back to Cannery Row. From the beginning, our founders’ intent was to give visitors an intimate tour of Monterey Bay's beautiful natural communities and other fascinating marine environments, and ultimately inspire them to care for and protect the world’s oceans. Thirty years later, we continue to inspire ocean conservation and set trends for aquariums worldwide. We’re the only institution to successfully exhibit great white sharks. We created the first living kelp forest exhibit, and pioneered jellyfish exhibits that inspired countless imitations around the globe. We were the first aquarium to offer changing special exhibitions, and the first with a dedicated exhibit area for children and families. We continue to test the limits of what’s possible. As an ocean conservation leader, we’re deeply involved in cutting-edge research and advocacy to protect sea otters, Pacific bluefin tuna, great white sharks and other threatened ocean animals. Our Seafood Watch program to advance sustainable seafood practices is transforming the seafood market in ways that protect ocean wildlife. Our exhibits helped inspire creation of the largest national marine sanctuary off the continental United States, and we are now working to ensure the long-term success of the largest network of marine protected areas off the California coast. More than 55 million visitors have visited the non-profit Monterey Bay Aquarium since 1984. Many have left inspired to help create a better future for the oceans. We’ll continue to make a difference in the years ahead. Source: www.montereybayaquarium.org/-/m/pdf/groups/monterey-bay-a...

This Community Shield - oriental-whip-snake on net.photos image has 1024x683 pixels (original) and is uploaded to . The image size is 137253 byte. If you have a problem about intellectual property, child pornography or immature images with any of these pictures, please send report email to a webmaster at , to remove it from web.