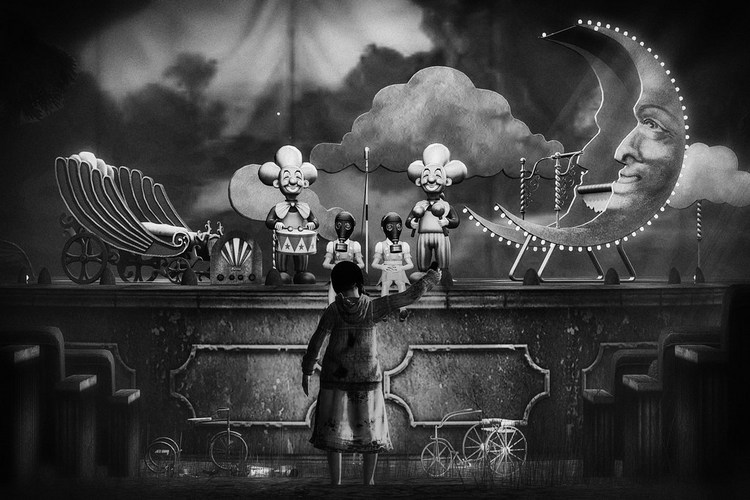 SIM : Everwinter "Read" this picture on Medium At the age of five, I already knew how to read, write, count, and put on my gas mask by myself. My parents almost never left the underground bunker because of the heat. However, unlike other children, whose parents locked in their room, I could leave whenever I wanted, for as long as I wanted. One day, while lying awake, I heard them talking through the wall of the living room where they were lying, saying that it was better to leave me to be free, because at least I enjoyed the moment, and that if i unfortunately died it would be one mouth less to feed. I did not exactly understand what they meant. I ate little. I was not a mouth. What were they talking about? What mouth would be deprived of food if I died? And to die is where? I felt sorry for that hungry mouth; sometimes I'm hungry and it feels bad. On the other hand: “enjoy the moment”? I could not understand the sense of it, but it sounded cool. Still, I did not have many playmates on the surface. I was walking alone with my gas mask on my face. I loved exploring the quays on the banks of the Rhine. It's a large expanse of gravel, littered with debris from my parents' world. In the middle of the Rhine, there was water, in winter, from time to time. I walked along the interminable block of tall buildings that bordered the quays. Some parts of the buildings were still inhabited, but most people had joined the underground. I remember one night when I went far north and it was too late to go home. I always had a strong survival instinct. Afterwards, I realized that it was probably because, without really realising it, I understood the meaning of what my parents said that night, in the living room. Very young I knew how to evaluate the times I needed to go from one place to another, to locate where I was, to make the right decisions that saved me from trouble. That night, I decided to enter an almost completely abandoned building that seemed to be still stable enough to provide shelter. It was very hot, but unlike my parents, I was used to the heat. I was not hungry because an hour ago an old street vendor had given me a cake and a little water and that was enough for me. I entered the building, climbed two floors and found a room with an old dirty blanket on the floor. I checked that it was not infested with cockroaches, and I slumped on it to spend the night. It was my first solo adventure, in short, and I felt good. I knew that my parents were not worried, that they trusted me, that they loved me and that they were not concerned enough about me to worry too much. Light of heart, I fell into a happy sleep. I dreamed of an amusement park whose image I had seen in the books that mom brought home. In the middle of the park there was a large children's theater. I was on the stage, back to the audience. In front of me there was a big altar covered in toys like I had never seen, pretty plastic dolls, copper musical instruments, a radio, a little coach at my waist in the shape of a pumpkin, a little bike ... all the wonderful toys that my parents had said had been plentiful and new, before the war. Two little twin girls wearing gas masks just like me but dressed in pretty new clean blue dresses, faced me. Through their masks, they said to me: "Hello, come play with us, come play with us, forever and always and forever ... our parents have eaten the land and they left us their rubbish, it's a nice gift : meat grinders, kalashnikovs in shambles, but less beautiful than their toys, so we stole their toys and like you, we fled! " Then, in my dream, the two twins disappeared. I stayed alone with all these toys in front of me, in an empty theater. I do not remember the rest of the dream, if there was one. My life has been a passing from hell to paradise. As a child, I believed that hell was our destiny, that nothing else existed. But those who have survived have, as much as they could, rebuilt a hospitable land for us and the rest of the living. I realized that my parents went the other way. That they were born in paradise, destroyed it and went to the hell that they had made themselves. The shadow does not come from the light. It is the light that comes from the night. The words of the twin children is taken from the Stephen King's book "Shining".

This Children's Place Near Me - xxiith-century-child-dream on net.photos image has 1024x683 pixels (original) and is uploaded to . The image size is 175888 byte. If you have a problem about intellectual property, child pornography or immature images with any of these pictures, please send report email to a webmaster at , to remove it from web.