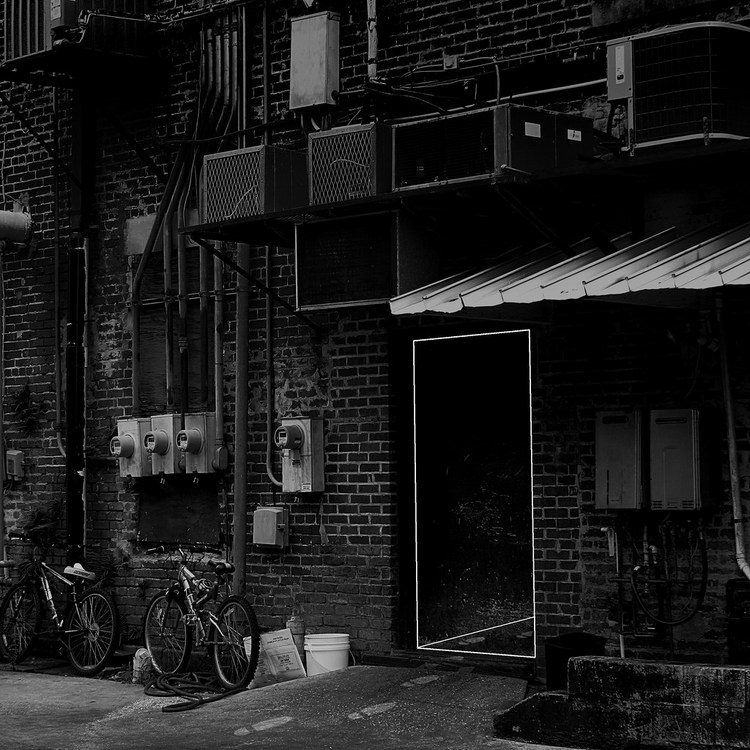 where some see a closed door others see opportunity.

. wish i was one of those. i could use an opportunity right about now. -=- the geek behind the curtain: a hand-held, point-and-shoot shot from a back alley last weekend, when little E took me about an hour's drive south to Ocala for my birthday. just looking for a new place to take pictures. interesting place but it ended up being a very grey day with very flat, pale light. after wandering around taking shots for nearly two hours she noticed the skies were darkening quickly. we managed to make it under a gazebo in the town square just as the skies opened with a rush of drama. where we were very soon joined by six Hare Krishnas and three homeless guys. somehow no one from the nearby outdoor Farmer's Market managed to get to the gazebo? after 45 minutes of chanting variations on the same three words the rain was at last light enough that we were able to make our way to Starbucks for hot cocoa to warm up again. the people who had been at the Farmer's Market didn't make it that far either. i guess they were trapped in their cars. messing around with this shot on the computer last night i drew an imitation white-chalk rectangle on the black scuffy door with a selection tools and a digital paintbrush, then added an angled line to make it seem as if the space were leading into a corridor. also cloned away the door handle and door closer. i had a different plan for it last night, but this morning i figured out how to make shoe prints with the same basic method (selection tools, digital paintbrush). and now the simplicity of this appeals to me. so the other idea goes into my sketchbook for later. after getting it done it now reminds me of the children's book, Harold and the Purple Crayon, which i used to love to read to little E when she was younger. if you haven't read it, its a book from 1955 about a kid who can "step into" his own simple drawings, and the adventures he has getting lost in his own imagination. digital painting and blending done in GIMP. black-n-white conversion done with GIMP-plugin G'MIC.

This Children's Place Near Me - where-some-see-a-closed-door-others-see-opportunity- on net.photos image has 1024x1024 pixels (original) and is uploaded to . The image size is 271153 byte. If you have a problem about intellectual property, child pornography or immature images with any of these pictures, please send report email to a webmaster at , to remove it from web.