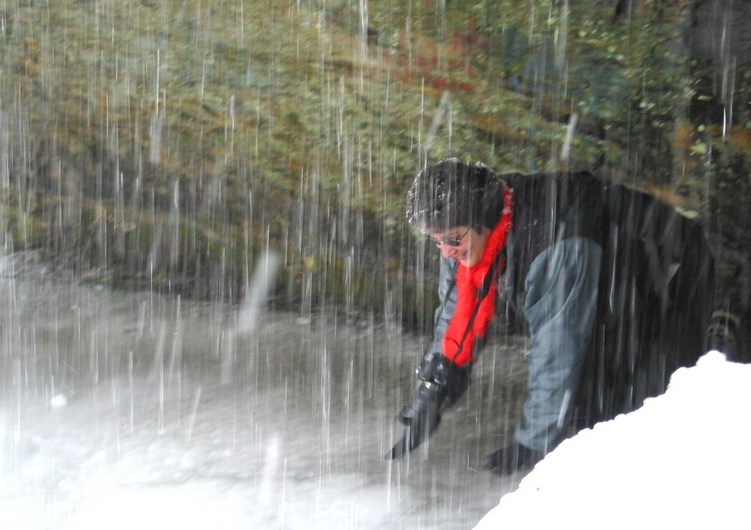 On a very cold and wintery day at the end of January the photo enthusiasts of the Westmoreland Conservancy went together on a photo excursion to the scenic Buttermilk Falls east of Pittsburgh, PA. Days like this usually make photography a difficult endeavor, not the least of which is caused by the constant pelting snow, and our aversion to get the cameras wet! The falling snow added to the splendor of the pristine habitat down by the falls, so we decided to hazard a chance to make photos. Of course the falls were fed by a very fast moving stream, which we needed to cross in order to get down below the falls. Most of us had waterpoof boots, but one member, being from Norway decided to cross the stream in bare-feet. This appeared to be the highlight of the trip, as everyone was enjoying with mirth the obvious (at least to the rest of us) humor in the situation. To get down the falls we descended a very steep incline, which had a sign at the top: WARNING: Restricted Area. Of course we ignored the sign and vetured down anyway, making a bit more mirth about our inability to follow signs. In order to document our descent, I proceeded down at breakneck speed, so that I may be able to document the descent of the rest of our crew. A rope was affixed at the top, and the others were full of laughs considering the obvious fun they had lowering themselves down along the way. At the bottom another venturous photographer decided to get on her hands an knees and crawl around underneath the waterfall, camera in hand, in order to film from that perspective. The ice underthe falls was not covered with snow, and was therefore quite slippery, fortunately the camera and photographer made it back out without slipping! In addtion to Buttermilk Falls, the group took a nice hike along Mr. McFeely trail, a circular loop which took us through the fascinating wooded area. The snow was much deeper at this elevation, an area east of the city and near a ridge along the Allegheny mountains called Chestnut Ridge. The American Chestnut tree no longer towers above the woods, but we were surrounded by many Beech, Red and White Oak, Maple and Birch trees along the path. One member exclaimed he had seen a ghost -- a ghost tree: A tree adorned with lots of snow. Many of the old trees had fungi growing on their vertical faces. With the snow on top, it reminded me of the expression: "There may be snow on the roof, but there's still a lot of fire left in the hearth!" These particular woods seemed to have a feel or distinctive aura all their own, and indeed we began to hear what sounded like a very loud babling brook sound off to once side, an area near the top of a hill that didn't seem to be able to support that much water. Maybe the ghost had indeed returned? Or perhaps there was a stream over there. Several member ventured to see, and determined that the sound was being made by the heavily falling snow impacting large hi-voltage electric cables that ran through along this area. They made such a loud sound, that sounded like water running, it seemed almost unreal. Soon we circled all the way around to where the path split off at a Y. Several of the female members of the bunch, off in front, were laughing at something very funny. We found out it was a curious dialog concerning "sense of direction" and perhaps the differences that gender may make in such a sense. ------- For the late Fred Rogers Buttermilk Falls was a place of childhood enchantment. Buttermilk Falls was once owned by Fred McFeely, Mr. Rogers maternal grandfather. As a child Mr. Rogers often visited his grandfather’s farm near Clyde, PA. After Sunday dinners and on summer vacations he would walk the grounds with his grandfather sharing in special times. Many ideas and expressions used in the children’s television program ‘Mr. Rogers Neighborhood’ were originally conceived at Buttermilk Falls In the late 1970’s Mr. Rogers revisited Buttermilk Falls to film a segment for the PBS series entitled “Old Friends…New Friends”. Two character actors portrayed Mr. Rogers and his grandfather in the program which focused on what different generations can learn from each other. When visiting the site today it is not hard to imagine how a young boy, who grew up to influence millions of people on public television, could recall in later years the special significance this place held for him. Even today Buttermilk Falls is a place of enchantment and magic.

This Children's Place Near Me - ill-never-do-it-again-i-promise- on net.photos image has 1024x723 pixels (original) and is uploaded to . The image size is 132445 byte. If you have a problem about intellectual property, child pornography or immature images with any of these pictures, please send report email to a webmaster at , to remove it from web.