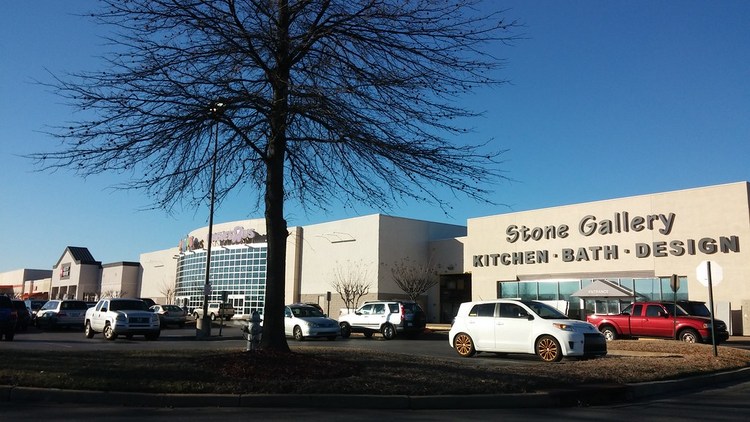 Even though we're headed back to the Lakeland Kroger this weekend, today's teaser photos will all be Toys “R” Us related. Specifically, my goal here is to try and briefly (or at least, as briefly as I am able to write, that is; so y'all are probably in for a long ride, knowing me XD ) uncover the history of TRU's separate children's clothing chain, Kids “R” Us, in Memphis. I didn't realize this until very recently (like, “after all remaining TRU stores began liquidating” recently), but the Stone Gallery store you see in this shot – to the right of the Wolfchase-area Toys “R” Us, which I have documented in this album – was formerly a Kids “R” Us store! You can tell based on the triangular “ENTRANCE” awning above the store's, well, entrance. Having discovered this, I was hoping to get a much better picture of the store, but alas, it is currently being remodeled beyond recognition into a La-Z-Boy store. Prior to Stone Gallery, this building housed a store called “Golf Discount”; and until La-Z-Boy's current construction, neither previous tenant had altered the exterior at all from the Kids “R” Us days, besides slapping on some fresh coats of paint. I wrote in this description that, based on Google Street Views, the main TRU store itself wasn't remodeled to include a Babies “R” Us store-within-a-store until late 2007/early 2008. I'm sure that if this former Kids “R” Us had still been available, TRU may have been inclined to open the BRU in that space instead, but, per those same Street Views, Golf Discount was already operating in the former KRU as of 2007. As a matter of fact, Kids “R” Us closed long prior to that, with all stores in that chain closing by the end of January 2004, according to Wikipedia. Action News 5 has an article on their website noting the closure of Memphis's Kids “R” Us store from that same time period, in fact, which you can see here: it notes that “Toys 'R' Us is closing all 146 of its freestanding Kids 'R' Us clothing stores by the end of January, including one in Memphis.” Logic dictates that that article was likely referring to the KRU seen here, in the Commons at Wolfcreek. So the question becomes... (cont.) Value City Furniture // 8044 Giacosa Place, Memphis, TN 38133 Toys “R” Us (now closed) // 8060 Giacosa Place, Memphis, TN 38133 Babies “R” Us (now closed) // 8060 Giacosa Place, Memphis, TN 38133 Stone Gallery (now closed) // 8076 Giacosa Place, Memphis, TN 38133 (c) 2018 Retail Retell These places are public so these photos are too, but just as I tell where they came from, I'd appreciate if you'd say who :)

This Children's Place Memphis Tn - former-kids-r-us-wolfchase-memphis-tn on net.photos image has 1024x576 pixels (original) and is uploaded to . The image size is 176838 byte. If you have a problem about intellectual property, child pornography or immature images with any of these pictures, please send report email to a webmaster at , to remove it from web.