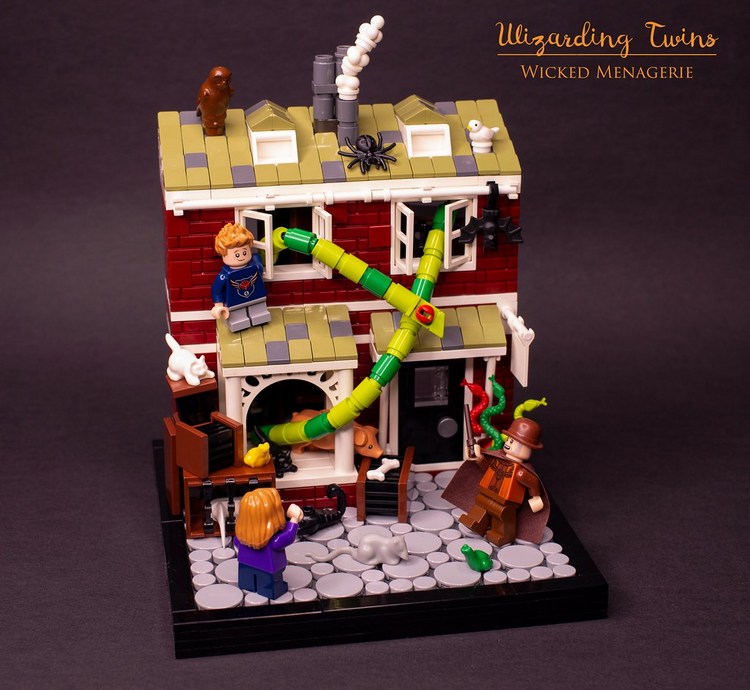 After revealing to the twins that they were wizards, Mr. Copperbottom had been forced to stay at the Honeycutts’ home until far after midnight. The twins and their, still very confused, mother had become a bubbling well of questions about the wizarding world. He tried to answer each question as thoroughly as possible and might have had the chance to leave after tea, if Mr. Honeycutt hadn’t come home early, starting the chain of questions and explanations anew. After promising a dozen times to come back soon and leaving an address for the them to send an owl to (a comment that started another series of questions about communication in the wizarding world), Mr. Copperbottom was finally released and visibly exhausted made his way to the garden gate, where he disappears with yet another plopping noise. The twins stayed up late that night, not wanting to sleep, as they feared it could only have been a dream and they’d wake up as ordinary children again. But in the morning there were still two big letters lying on the kitchen table and the white rabbit which Mr. Copperbottom had summoned to prove his magic to Mr. Honeycutt was nibbling on a bunch of carrots on the countertop. Two weeks passed and the twins spent every waking minute reading the letters from Hogwarts over and over again, until the parchment became dangerously fragile, so their mother took it away. Of course, by then, they already knew the letters by heart and imagined what the wonderful items on the material list could be and where in the world they could buy them. Dragon skin gloves, a wand and many other things certainly didn’t sound like they were sold in a supermarket. The answer came in form of Mr. Copperbottom, who appeared one late July morning to take them to Diagon Alley, a magical shopping street in the heart of London. He led the family to an old pub, for which the word shady would have been a compliment. At that point Mrs. Honeycutt seriously worried, whether they’d just fallen for a very elaborate prank. Inside dozens of witches and wizards were sitting around small tables with the weirdest foods and drinks in front of them. The family proceeded to an old cobblestone wall, which promptly gave way to the most amazing thing the twins had ever laid eyes on. Diagon Alley was truly a place of wonder, filled with every weird item one could imagine. There were shops for enchanted clothing, potions and ingredients, wands, Quidditch supplies (whatever that was), spell books and candy that smelled of four flavors at once. And so began the best shopping tour of all time. Soon, their mother’s pockets were empty and the twins were laden with their school gear, including a cauldron, quills, books and their school uniforms. Probably the most important new acquires were their wands, necessary for casting spells of all forms. As a matter of precaution, they were immediately taken away by their mother to be safely stored until their departure for Hogwarts, since she knew all too well about her children’s talent for destruction, even without any magic catalyst. Now, there was only one item left on the list and it was the one the twins were most excited for, a magic pet! Even before Mr. Copperbottom could point it out, Adrian had found the closet pet shop, appropriately called The Wicked Menagerie. In front of it, dozens of large and small cages were stacked up and inside them were the weirdest animals the twins had ever seen. While some of them barely fit into their cages, stretching their claws out between the bars, other cages seemed to be empty and only emitted an ominous hissing sound. Inside birds were tweeting, dogs barking, lizards clapped their tails against their cages and on the roof beams owls were melodically shu-hoo-ing. „I bet I can find the coolest animal of all!“ Adrian said. „You wish!“ Abby returned in a more than competitive spirit and they both sprinted into the labyrinth of cages and terrariums. Adrian sprinted along the cages. There were pink spotted Dalmatians, translucent birds, six legged hamsters and even something that looked like a cat with feathers. Suddenly he tripped over something that felt like an oversized garden hose. He fell flat on his face. As he looked up, he saw that there were parts of this garden hose all over the floor and they were… moving? Now, this was cool! Mr. Copperbottom had just talked to Mrs. Honeycutt and reassured her that all of the animals sold here were absolutely harmless and she should not worry about her children. Apparently she wasn’t worried about them and only voiced her concerns about the safety of the shop itself. Just as he started wondering about what she could mean by that, a giant tropical snake broke from the first floor window, winding itself around the building, its emerald scales shimmering in the sunlight. Relaxingly dangling on one arm from its body was Adrian Honeycutt, grinning at his sister from ear to ear. „Look, Abby, I made a new friend!“ _________________________ Here’s the second part of my Harry Potter story Wizarding Twins. I prepared this one way before Christmas, but was busy to upload it until now. I hope you like the build and enjoy the story! If you have any suggesting for their future adventures, let me know! Previous part next part

This Children's Place By Me - wizarding-twins-wicked-menagerie on net.photos image has 1024x942 pixels (original) and is uploaded to . The image size is 170008 byte. If you have a problem about intellectual property, child pornography or immature images with any of these pictures, please send report email to a webmaster at , to remove it from web.