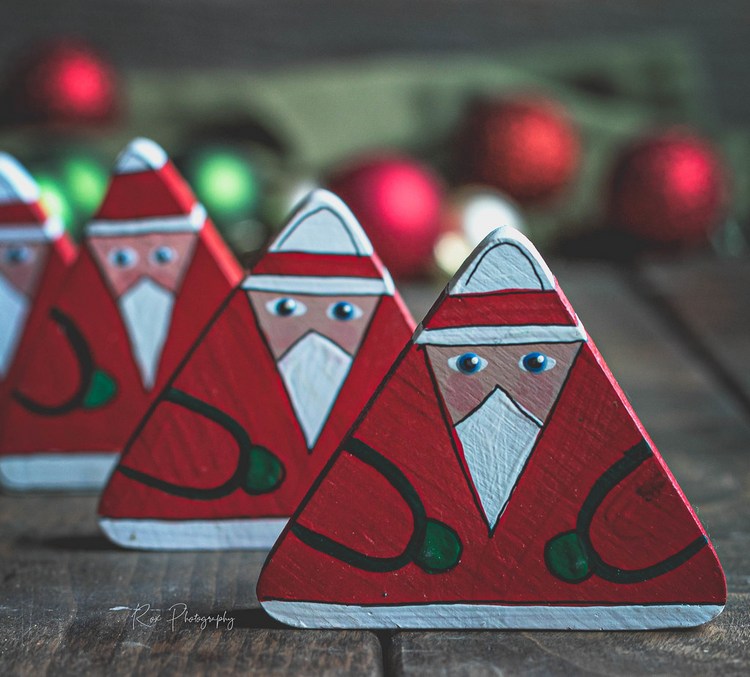 These little Santa triangles were made and purchased at the Ninemile Schoolhouse Christmas market a number of years ago. The market was run by a lovely woman named Hanneke Eikema Ippisch. Hanneke immigrated to the US after WWII where she was part of the Dutch Resistance who help find hiding places for Jewish families. At the age of 19 she, her father, and others in the resistance were captured and imprisoned. Some were executed, but Hanneke and her father were released after the war. Hanneke is the author of a number of children's books, and one titled "Sky" ( called this because that was the only thing she saw outside her cell window) about her ordeal as a teenager. Later in life, she moved to a small town outside of Missoula MT where she and her family carved and created the most beautiful wooden Christmas toys and decorations. The Christmas market always opened the day after Thanksgiving and my mother and I would go each year to pick up a few special handmade items. These simple little Santas remind me of her special family, spending time with my mother, and how my own family just loves placing these little guys around the house. (There are 13 in the collection). I see them as a family celebration and a reminder of perseverance and love. The Christmas market is no longer open as Henneke passed away at the age of 87 in 2012, but I know many of her family's special art creations are in so many homes spreading joy. Theme: Celebrations - Macro Monday

This Children's Place By Me - santa-celebration on net.photos image has 1024x925 pixels (original) and is uploaded to . The image size is 205841 byte. If you have a problem about intellectual property, child pornography or immature images with any of these pictures, please send report email to a webmaster at , to remove it from web.