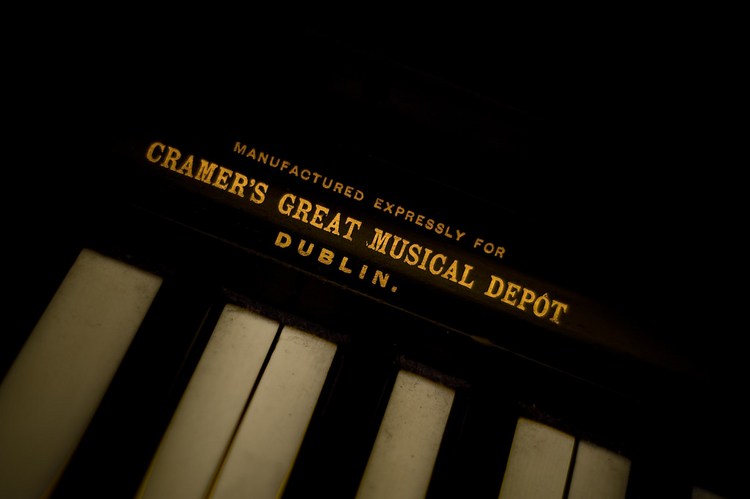 Cramer's Great Musical Depot. My middle child has just started piano lessons, like me, my brother and sister when we were kids. So the old Blüthner is back in action. It's been in the family as long as I can remember and has survived all our bashings and dismantlings; a wonderful old friend is back in daily use. It has lived here Dublin, and in Stourbridge, West Midlands and was made in Lepizig, former East Germany. Funny thing about it is it has a very particular aroma of old wood and must. As a kid, I used to take the bottom panel off and yell at the strings with the sustain pedal down. We still do it thirty five years later. I went on learn the bassoon. My mother, Enid, responds with a bit more history ... I just love these. Make me all sentimental. The photos are just beautiful. The piano must now be a museum piece but its special to me. I bought it with money from Grandpa Bell from an ad I'd seen in the paper. I looked at it in a house on the north side and when I played it I knew that it should belong to me. It has had a lot of hard practise done on it over the years, and Liz (my sister) always says that because of it she really learned how to make a good tone. It wasn't the easiest to play but you had to work at it - and the dividends paid off. What was really hard on it was when it was moved from Stourbridge back to this country. The movers didn't know where Dublin was and left it languishing in a warehouse in Belfast until it was traced - and this didnt do it any good . Your photos are so good and your captions are often quite brilliant. Where did I get you ? !! My sister, Liz, adds even more ... Just to add to the history of this dear old friend which has been with me my entire life bar about the last five years, when it went to live with Hugh. ‘The Bluthner’, as it is generally called in the family, was bought in Dublin in the mid-fifties by our mother for £100; their house was bought at the same time for £2,200. You can do the math – but I reckon that it represents roughly 4.5% of the cost of the house. At today’s prices, the same house would be worth, give or take, €1,000,000 – can you imagine spending 4.5% of that on an upright piano nowadays? I didn’t when I went to replace it about five years ago and am now paying the price! This piano travelled with me when I emigrated to the UK twice and returned to Ireland twice. It spent two years of its life in the late seventies in a house I shared in south London in the bedroom of a friend of mine, Tony Curtis, now a well known Irish poet. On its second return to the UK (to Stourbridge in the West Midlands) in the early 80s, not only had it been diverted to a damp warehouse in Northern Ireland due to the (lack of) geographical skills of the removers, but it had become host to a family of moths which had been living on its felts in the said warehouse. It never really recovered from this in spite of the replacement of the felts, the addition of new pins, and the judicious placing of lavender and rosemary bags in its innards to ward off prospective families of moths. It is hard to describe one’s attachment to an instrument which has been such a key part of one’s life, in which music plays such a key part. I have probably spent more hours in the company of this piano than with anything else, animal, vegetable or mineral. It was my principal source of income as a student when I gave piano lessons to reluctant students with enthusiastic parents; it has been the vehicle for the expression of many an emotion, both for me as a player and for me as audience to my two children’s music-making; it has provided the means of diversion when only concentration on learning a Bach fugue could expel other thoughts… ‘The Bluthner’ has now been replaced in our house by a new Boston upright piano, and although it has been in my family for five years now, it still seems an imposter, a sort of ‘step’ relation, not quite the real thing. I hope Hugh’s children will love making music on this old piano. I am reconciled to the fact that, just like everything else in life, its days are numbered, its departure inevitable.

This Children's Place By Me - old-friend- on net.photos image has 1024x681 pixels (original) and is uploaded to . The image size is 65710 byte. If you have a problem about intellectual property, child pornography or immature images with any of these pictures, please send report email to a webmaster at , to remove it from web.