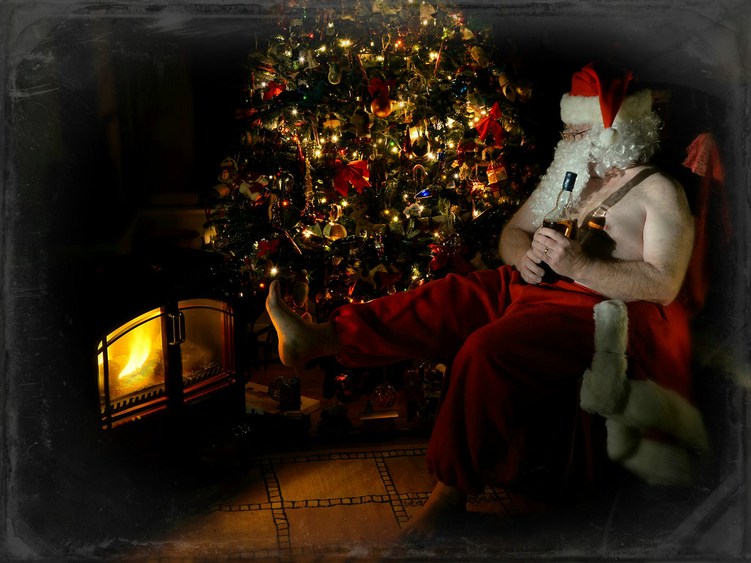 Mrs Claus has been keeping her eye on him.

She’s worried by him. He's not looking happy. He seems lost in thought, his mind in a far off place. Yes, she's been watching him, Mrs Claus has. And he's taken to drinking on these long dark nights. For him, Christmas is complicated this year. The job has always been pretty easy for as long as he can remember. Which is several hundred years. Ever since he took over the job from St Nicholas. But now, and very suddenly.....he's getting cold feet! Of course he tends to the reindeer through the year, and relaxes through the summer with lazy days sitting in the sunshine on the mountainside, cuddled up to Mrs Claus. She's his soul-mate and kindred spirit and they are very much in love. The elfs work away happily in the workshops nearby. There's a great spirit between them and they have a boisterous party in the end hut every Saturday in the summer months, with singing and dancing, and perhaps too much beer. But all is not well. And it’s not just Christmas 2018 on his mind. Already he’s worried about Christmas 2019 too. Word has it that the major toy suppliers are stockpiling already, causing a shortage of product that’s affecting him now. And what's he going to do if there is a hard Brexit? All the children's gifts are going to be stopped in the French ports it appears . And even if they get through they are warning of long delays and higher prices. Christmas might have to be postponed, or even cancelled. It’s not just about the toys. There’s the staff issue too. He would like to employ more elves to make more toys but his cheap labour of Polish and Romanian elves (There’s also a Syrian elf pretending to be Croatian) will have been forced to go back to their own countries. For God's sake he might even have to employ British elves but they will want higher wages, and manufacturing quality will fall (But at least he can put labels stating "Made in Great Britain" on them to cover up the faults and cracks in them). So many problems. Lord knows, he's even heard that he won't even be able to fly his sleigh across the sky on Christmas Eve because Britain has left the EU. And he will have to pay money for a visa. And the reindeer will need to be quarantined each time they cross a border. And Customs will want to inspect his sack. It all seems so nightmarish. Yes, Brexit is one headache for Santa, but there's a greater problem on his mind. He's dedicated his life to giving presents to boys and girls all over the world. But this gender equality thing is really vexing him. He is Father Christmas. Yes, a slightly rounded, pale skinned mature gent who loves nothing more than to go He-He-He and make people smile. But he doesn’t adjust to change easily. He’s heard some folk are questioning him. Why does Santa have to be a man, they say? OK, he’s tried to get with this new way of thinking, even suggesting that Mrs Claus comes along on Christmas Eve and helps him get the presents out. A bit of sex equality. He would love her to be there but SHE insists it is a man’s job and she wants to stay in and get the ironing done before they go on holiday on Christmas Day. He’s further stressed that they are asking on social media why he only employs elves and not elfettes? And if he did would they get the same pay? Some are branding him sexist and a misogynist. For generations he has given dolls and more feminine toys to little girls, and cars and construction toys to boys. But now he's not even allowed to think of the children in terms of girls and boys. Who is he to assume they identify with being one or other and give them toys historically associated with their gender? But bad as that is, now there are the ‘others’: neither male or female, despite outward appearances, some who were boys last Christmas, and are now girls....and some who haven't decided yet. How can he possibly plan ahead? Another problem is that there is falling demand for the traditional toys he normally delivers. Kids are so demanding and the number of texts and emails he gets from children demanding…yes DEMANDING the latest smart phone or Playstation console depresses him. Where do they think he will get the money from? And so many have the gall to complain when they don’t get what they want! They even ask to know his Formal Complaint Procedures !!! Who do they think Father Christmas is? The way things are now is just insane for a middle aged gent who has always generously thought on the romantic side of tradition and tried year after year just to make people happy. Christ! The maniacs in charge of the asylum have already driven him to drink and now they might make him swear in front of Mrs Claus. WTF is going on? How can he single handed keep children's dreams alive when these do-gooders and very unseasonal snowflakes stupidly destroy everything that creates happy, well-rounded children? They will eventually kill Christmas if they get their way. As far as he is concerned if things don’t improve pretty darned quick, he’s had enough and he’s buggering off and he will just find a part-time log cutter’s job somewhere out of the way in Finland. Somewhere he can have a nice quiet, happy life with Mrs Claus and no more late night’s out on Christmas Eve. Here's wishing all my flickr friends a very Merry Christmas and a happy and healthy New Year. I hope 2019 smiles better. (PS I had to put a couple of extra stone on just to look more like the real Santa, and just let my body go. I think it is quite a good likeness now)

This Children's Place By Me - mrs-claus-has-been-keeping-her-eye-on-him- on net.photos image has 1024x768 pixels (original) and is uploaded to . The image size is 205732 byte. If you have a problem about intellectual property, child pornography or immature images with any of these pictures, please send report email to a webmaster at , to remove it from web.