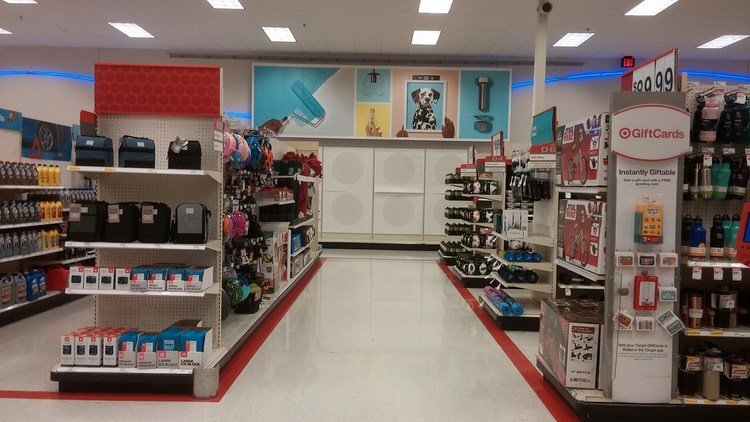 Maybe the other 100 had already sold

WEEK 5 – Cordova Super Target Closing, Set II We’ll wrap up today with this shot looking from the intersection of the left-side and rear actionways over toward the left-side wall, where we find even more empty aisles. That said, all of the other aisles in the pic look neatly and fully stocked (just check out those pristine rows of motor oil!)… one store, different worlds, I tell ya! Obviously, Target was being strategic here, too, by emptying out the perimeter wall aisles first and condensing that merchandise further into the salesfloor, although this particular strategy at least is nothing new, as that’s pretty much the definition of condensing merchandise. But it’s a good one nonetheless! For the first time in weeks, my iPod has finally chosen to cooperate with me tonight… lately it’s only been keeping a charge intermittently on its dock, and I haven’t gone and bought a wall cord yet. Of course, the days its battery is dead are always the ones I want to put my headphones on and listen to some music. So I’m pleasantly surprised that the stars finally aligned tonight, and to celebrate, I thought I’d share a music list with y’all! :) EDIT: Well that might be why it's not charging - just discovered the lightning plug broke off inside the charging port XD 1. King of Fools – Poets of the Fall 2. Children of God – Third Day feat. New Hope Academy Children’s Choir 3. Don’t Stop Dancing – Creed 4. Into the Nothing – Breaking Benjamin 🔥 5. Vor í Vaglaskógi – Kaleo 6. Breathing – Lifehouse 7. Breaking Inside – Shinedown 8. What I Believe – Skillet 9. Fire Island – Fountains of Wayne 10. Just Feel Better – Santana feat. Steven Tyler 11. Missundaztood – P!nk 12. Lucy – Skillet 13. Still Ain’t Over You – Rob Thomas 14. Souls a’fire – Matt Corby 15. What Was I Thinking – Theory of a Deadman 🔥 (new album out tomorrow! Also I’ve fallen back into my old trap of listening to Theory CDs on repeat in my car. Send help) 16. You’re a Mean One Mr. Grinch – Thurl Ravenscroft 17. Chile – Toad the Wet Sprocket 18. Anti Gravity – Lindsey Stirling 19. Made of Glass – Trapt 20. It Will Rain – Bruno Mars 21. Fly – Sugar Ray 22. When I Come Around – Green Day 23. Torture Me – Red Hot Chili Peppers 24. Company Car – Switchfoot 🔥 25. We Build Then We Break – The Fray 26. Send My Love (To Your New Lover) – Adele 27. Working for the Weekend – Loverboy 28. Copacabana – Barry Manilow 🔥 (I didn’t give this one a fire emoji in my notes, but I will here. For Lola.) 29. The Difference – Wallflowers 30. Walk Away – Script 🔥 (feat. B.o.B. in this particular version, but typically I prefer the regular version, yet I gave this one a fire emoji anyway, so I must like it no matter what lol) 31. No More – Three Days Grace 32. Phase – Breaking Benjamin 33. True Love – P!nk feat. Lily Rose Cooper 34. One Hit Wonder – Everclear (c) 2020 Retail Retell These places are public so these photos are too, but just as I tell where they came from, I'd appreciate if you'd say who :)

This Children's Place By Me - maybe-the-other-100-had-already-sold on net.photos image has 1024x576 pixels (original) and is uploaded to . The image size is 145520 byte. If you have a problem about intellectual property, child pornography or immature images with any of these pictures, please send report email to a webmaster at , to remove it from web.