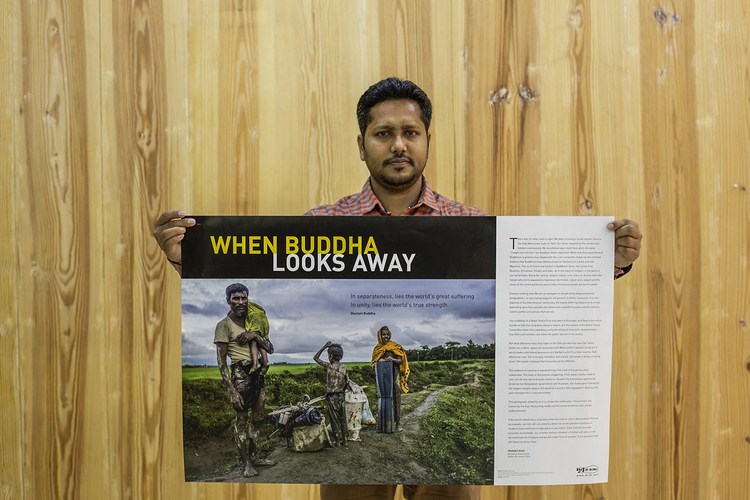 Photographer Kaisar Ahamded holds up Drik's poster with his image of Rohingya refugees. Supporting text by Shahidul Alam: There was no other soul in sight. We were crossing a small stream close to the holy Mansarwar Lake in Tibet. Our driver stopped by the stream and honked continuously. My incredulous gaze must have given me away. “I might hurt the fish” our Buddhist driver explained. While that first experience of Buddhism in practice has stayed with me, I am constantly shaken by the extreme violence that Buddhists have demonstrated in Thailand, Sri Lanka and now Myanmar. This is of course not limited to Buddhism alone, the violence by Muslims, Christians, Hindus and Jews, all in the name of religion, is the bane of our world today. Being the ‘wrong’ religion, colour, race, class or sex has been reason why entire populations have been decimated, unjust wars waged and the continued brutal persecution of innocent people across the globe. Greed is nothing new. We are no strangers to people being dispossessed by landgrabbers, or wars being waged in the pursuit of others’ resources. It is the duplicity of the international community, the hugely differing responses to crises depending upon how valuable the victims are as political pawns and the rhetoric used to justify such actions that vex me. The credibility of a Nobel Peace Prize that went to Kissinger and Obama but not to Gandhi or Edhi has long been shred to tatters, but the silence of the Nobel Peace Committee when their awardees justify the killing of innocents, demonstrates how little such entities care either for public opinion or for justice. But what difference does that make to the little girl who has seen her father killed, her mother raped, her home burned? What comfort would it bring her if world leaders did indeed denounce such barbaric acts? It is their inaction that affects her now. She is hungry, homeless and scared. She needs a family, a caring touch. She needs to believe that tomorrow can be different. The evidence of injustice is overwhelming. The scale of the persecution, unbearable. The need on the ground, staggering. Food, water, toilets, medical care, are all very real and acute concerns. Despite the tremendous generosity shown by the Bangladeshi government and its people, the challenge of managing the largest refugee camp in the world by a country little equipped in dealing with such emergencies is insurmountable. This photograph, powerful as it is, shows the visible pain. The torment, the insecurity, the fear, the burning inside, the sense of eternal loss, remain undocumented. If the world indeed has a conscience then the time is now to demonstrate that we, as a people, can not, will not, stand by while one of the greatest injustices of modern times continues to take place on our watch. Even if we fail to make ourselves accountable, our children and our children’s children will ask us how we could have let it happen and we will never have an answer. It is a question that will haunt us all our lives. Shahidul Alam

This Children's Place By Me - kaisar-ahamed-with-driks-new-poster on net.photos image has 1023x682 pixels (original) and is uploaded to . The image size is 184829 byte. If you have a problem about intellectual property, child pornography or immature images with any of these pictures, please send report email to a webmaster at , to remove it from web.