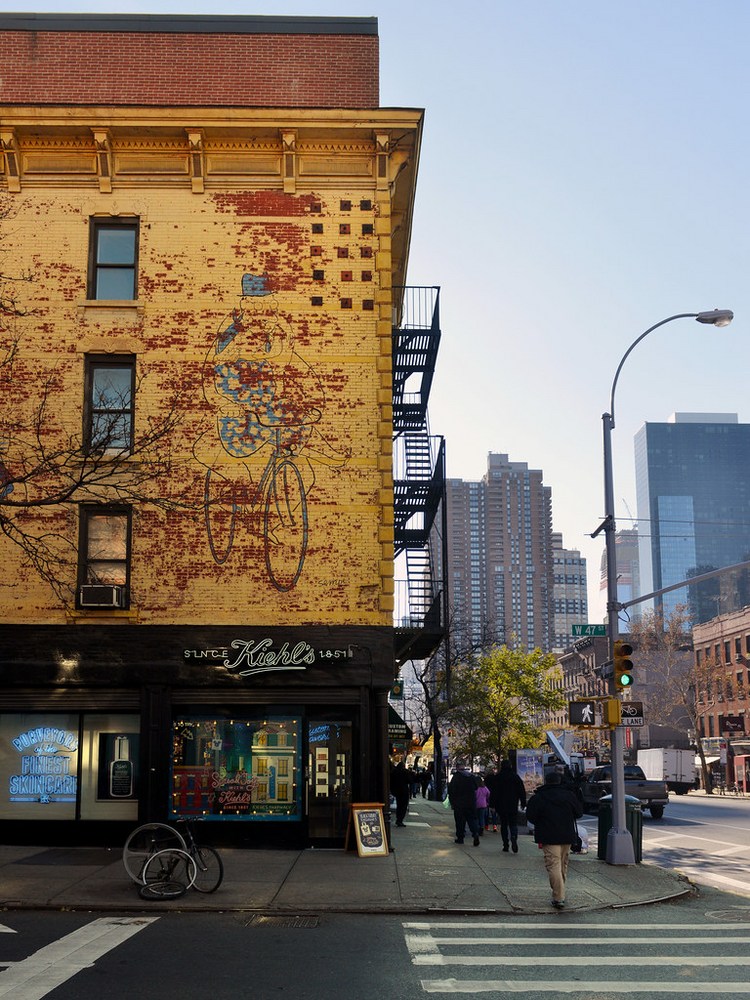 The location is West 47th Street and Ninth Avenue in the Manhattan neighborhood formerly known as Hell's Kitchen. The second through fourth floor wall mural that once stood out in vivid yellow and blue is by the famous French artist, cartoonist and children's book illustrator Jean-Jacques Sempé. He is also known for both cartoons and cover art in The New Yorker magazine. Due to the faded condition of the mural and the peeling paint I should describe this art. The scene is a very French looking and obviously happy couple on a bicycle. It is (or was) a large but simple line drawing, reminiscent of "The Far Side" and familiar to readers of cartoons in the The New Yorker. Outside of the blue in the bicycle, two hats, a tie and minimalist pattern that creates a yellow flowered dress, the yellow background colors the couple as well. The plump woman in the flowered dress rides on the lap of the man with her arms lovingly wrapped around his shoulders. The man wears a contented smile. I always thought the message of the mural was “Life is good on Ninth Avenue.” I can't place an actual date on this wall art and Google hasn't been helpful at all. I do know that the Kiehl's occupying the first floor of the building was once a large and successful bicycle store, Metro Bike. Perhaps the art appeared in the early 90's and Mr. Sempé was commissioned to make the establishment more noticeable. Or maybe the mural came before the bike shop, appeared when the storefront was occupied by a local Westside family run Tavern and named Sonny's Café. It would be interesting if the bike shop proprietor was inspired to rent the space because of the art. I can recall that during the bike shop era both the Ninth Avenue and 47th Street side of the store had a long yellow signs with “BICYCLE” written in bold blue letters and the sign matched the mural. I’m also old enough to recall a time when the mural was not there, back before Ninth Avenue was a destination for dinner before a Broadway show and trendy bars filled with trust fund babies, even on Monday night. That mural brings back memories for me of a pre-gentrification Ninth Avenue, back when the Avenues claim to fame was a melting pot of vegetable stands, butchers, bakers, pasta shops and family run food specialty shops along with the occasional blue collar dive bar. Perhaps the inspiration for that mural, even if it was paid for by the owners of Metro Bike, was to add a little flavor to the early days of the Ninth Avenue International Food Festival.

This Children's Place By Me - faded-glory-jean-jacques-semp- on net.photos image has 768x1024 pixels (original) and is uploaded to . The image size is 307539 byte. If you have a problem about intellectual property, child pornography or immature images with any of these pictures, please send report email to a webmaster at , to remove it from web.