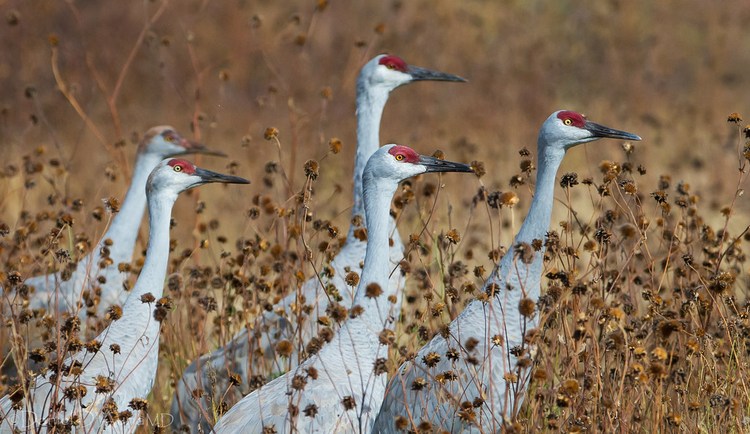 We approach a small group of sandhill cranes, that have flown thousands of miles to observe humans at Bosque del Apache refuge. They move off slowly from the water to the brush, and suddenly stop. I can image the conversation that they might be having..... "Okay, if we stick together in this brush we can hide and watch the humans over there. We need to be as still as possible! We don't want to scare them off! Are you sure we can't be seen? Absolutely! This brush is perfect camouflage. Now observe as the humans place those metal boxes in front of their faces. They begin to emit a low rattle or series of clicks. This is thought to be part of their mating ritual. They are not very successful. Most leave after hours of fruitless attempts, alone. You can see them glaring at the boxes and shaking their heads in disgust. Look at that human on the left! See how he opens his mouth slowly? That's called a stress yawn. It is thought to be an act of non-aggression. It signals to other humans that they can approach without threat of harm. Wow, these humans are complex! We only yawn when we are tired or bored. Well, it's just not the same when humans are involved. Trust me, it's all got to do with communication. See how they approach the water's edge slowly. Some stand and others kneel. Still, others will lay on their bellies. This all has to do with status in their clans. The most successful alpha males and females have the largest metal boxes and tend to stand or kneel. There are a few with big boxes who lay on their bellies, too. We have not quite figured that out yet. Did you hear that? There was a low trumpeting rumble from the human on the right. He emits a foul gaseous odor that is meant to keep intruders away. Do you see how the other humans are moving away from him? It's a subtle but effective method of demarcating territory. Occasionally, males will urinate to demarcate their territory. We never see females do the same. We are not certain as to why. These humans are a very interesting species. It was well worth the trip to see them! Maybe we should start a workshop and charge sandhills to come? Great idea!" #ILoveNature #ILoveWildlife #WildlifePhotography in #NewMexico #Nature in #America #USA #Canon #SandhillCranes #DrDADBooks #Bringit #Photography #Picoftheday #Photooftheday #ASandhillSees

This Children's Place By Me - comouflage-and-conversation-9741 on net.photos image has 1024x593 pixels (original) and is uploaded to . The image size is 217394 byte. If you have a problem about intellectual property, child pornography or immature images with any of these pictures, please send report email to a webmaster at , to remove it from web.