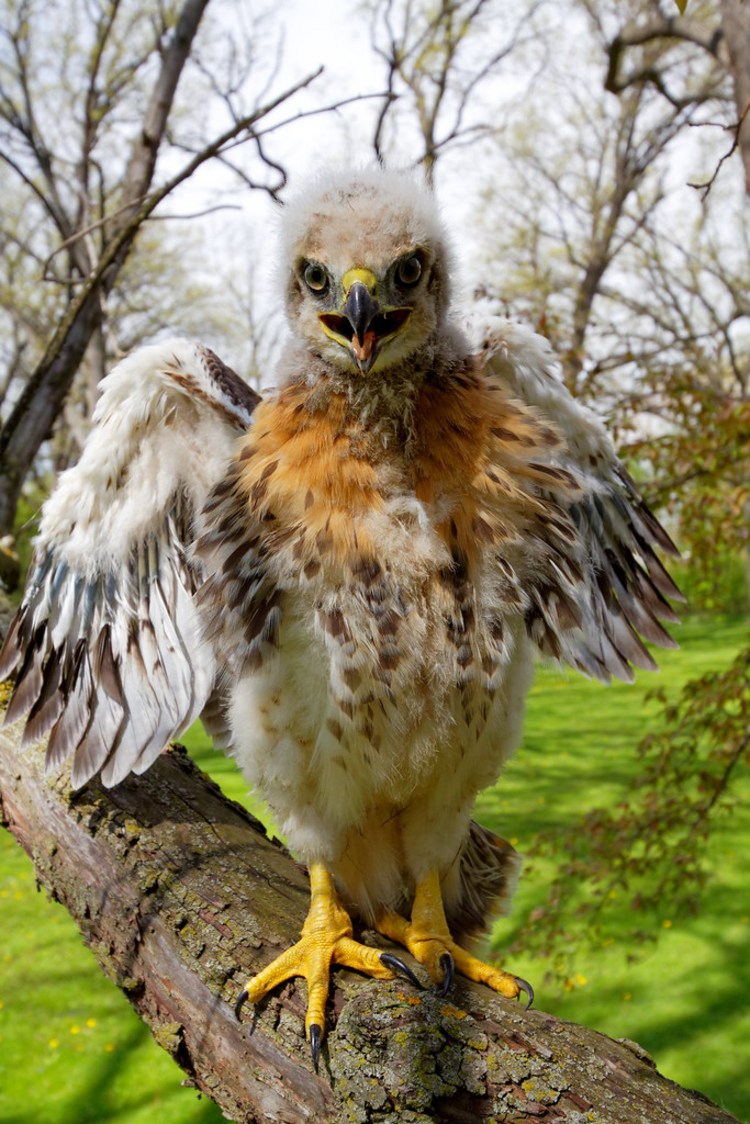 A Memory of the Fallen One

The recent loss of a favorite backyard oak tree got me thinking about this series of photos from 2011. I have never posted this particular photo. To me, it does not look real, but rather like some children’s plush toy or a taxidermy project gone bad. It is a photo of an immature Red-tailed Hawk that fell prematurely from the nest and was rescued. This photo, from an instant in which I believe I spooked him a bit by getting just a little too close. So here’s the story . . . There was a pair of Red-tailed Hawks that nested in our beloved backyard oak tree for many years. My family and I enjoyed watching the nesting and fledging of birds each spring. One morning as was my spring routine, first thing in the kitchen was to look out the window and crane my neck a bit to look up to the nest to check on the two young ones. On this morning there was only one that I could see. Not that unusual as the other may have been laying close to the nest out of my sight line. But as I turned away to the task of making the morning coffee, something at the base of the huge Oak caught my eye. One of the young hawks was in the grass some 50 feet below the nest where his sibling remained. After a call to our local wildlife sanctuary, we were told NOT to bring him in to them (they advocate for letting nature take it’s course if the bird is not injured), but rather just get him off the ground to protect him from predators by placing him in a low branch. My sons and I went out to collect the bird using some leather work gloves (this was easier than I thought it was going to be). The bird seemed to be uninjured. We placed him on a branch of a nearby flowering crab apple tree. This photo was taken (with me on a step ladder) after doing just that. He lasted on that branch about an hour or so after we left him there and was back down on the ground. So, my sons and I got an idea and went to work – we made an artificial nest with a sawed-off square plastic milk crate. We lashed the bottom of the sawed-off crate to the branch and lined it with some cedar boughs. We then placed the bird in the artificial nest and he seemed happy and stayed there. I believe the bird was young enough that he did not yet have the strength to perch the whole time on a branch and still needed a place to rest comfortably. The tree with the artificial nest was within view of the high nest where his sibling still remained – in fact, they could see and call to each other. After two days and a lot of squawkin’, the adult hawks began bringing food to BOTH nests (one young one in each). A successful intervention. This bird eventually fledged and joined his sibling in learning how to hunt (they were actually quite inseparable after they got back together - more so than I had ever seen in the years we had watched young ones fledge from this nest). A great opportunity to see a young bird in this state (the nests are usually quite high and the birds have lost their downy feathers by the time they have fledged and are more visible). This was an unforgettable lesson for my three sons who were 16, 14 and 9 yrs of age at the time, and a lasting memory for me too (and then there are all of those photos ;-). Some other (more realistic-looking) photos from this series deep in my photostream.

This Children's Place By Me - a-memory-of-the-fallen-one on net.photos image has 683x1024 pixels (original) and is uploaded to . The image size is 262092 byte. If you have a problem about intellectual property, child pornography or immature images with any of these pictures, please send report email to a webmaster at , to remove it from web.