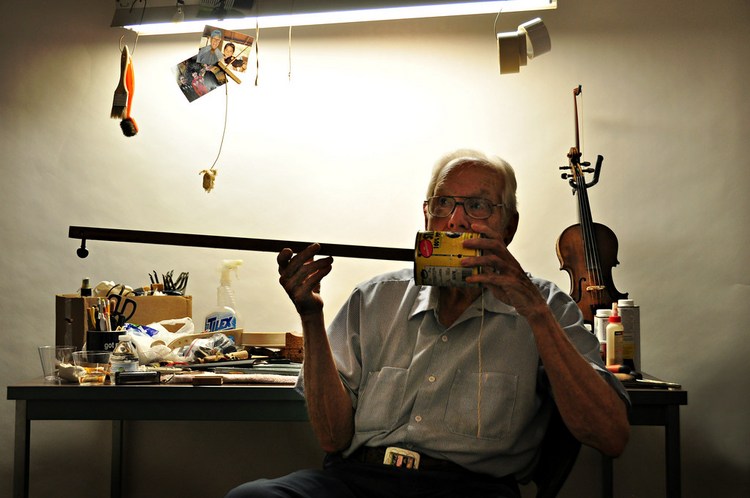 While touring another photographer's studio and examining several violins hanging on the wall, I heard a haunting sound emanate from a back room. I looked around the corner to find Mr. Hilton Lytle, the builder of the beautiful instruments adorning the studio walls. Mr. Lytle is a master builder of stringed instruments, one who chooses his own lumber, planes it down and fabricates beautiful music from raw materials. He was playing his own invention, the Canjo. Mounted in the Maple syrup can that makes up the body of the Canjo is a Hohner Marine Band harmonica. The string tension is changed with the cord hanging from the base of the Canjo. The music was pure Delta as Mr. Lytle sang his own song, "The Geriatric Blues." I was transfixed. As a photographer I love photographing musicians. I love music. But I have no music in me. But here was a man who fashioned music from scrap and raw materials. I was mesmerized. Mr. Lytle joined the US Army at 17, with only a dime and a pair of socks to his name. In Europe during WWII he helped liberate Buchenwald Concentration Camp near Leipzieg Germany. He earned a field commission to Second Lieutenant but was cautioned to keep the gold bar in his pocket lest he become the victim of a German sniper. After the war, he attended LSU, where he met the love of his life, Nancy. He had just enough money for a wedding ring and a two dollar marriage license. He put it all towards making Nancy his wife. During the Korean War, Mr. Lytle again served his country. Then he became a teacher. After he retired Mr. Lytle and Nancy toured the US with a travel trailer and finally settled in Mountain View Arkansas. Then Nancy bought him a dulcimer kit to keep him busy. Hil laughed as he told how he removed a wire from a screen door as a boy to string his first cigar box violin. He pointed out a similar, more recently made cigar box violin and picked it up and began to play it. The music was magnificent and lyrical. Then he showed how he constructed it. The bow was a stick with horsehair. The tailpiece was a piece of a tuna can. These pieces could be found anywhere and it made me think of Paraguay's Children's Orchestra Mr. Lytle explained how the dulcimer kit Nancy had bought him was just the seed to launch his passion for making instruments. And he makes beautiful instruments. The violin behind him is one he made from materials he purchased at the lumber yard. Hil also repairs stringed instruments, and is known throughout the US as the go to guy when nobody else will touch your broken fiddle. I found myself beginning to covet Mr. Lytle's cigar box violin, and the Canjo. Mr. Lytle offered to teach me to build my own, as he does with teenagers from his home. But it was not the instrument, it was the magic that is music and it's absolute mastery that fascinated me. And it would not matter if I possessed a Canjo or cigar box violin if I did not have the patience and knowledge to build and play it myself. Because what Mr. Lytle ultimately does is teach young people about life and in so doing transforms them. And the world becomes a better place through his efforts. Thank you Mr. Lytle. I'm honored to have you as my 177th stranger in my 100 Strangers project. Find out more about the project and see pictures taken by other photographers at the flickr group page. Landfill Harmonic: The Recycled Orchestra

This Children's Place By Me - 177-100-hilton-lytle-and-the-canjo on net.photos image has 1024x680 pixels (original) and is uploaded to . The image size is 148935 byte. If you have a problem about intellectual property, child pornography or immature images with any of these pictures, please send report email to a webmaster at , to remove it from web.