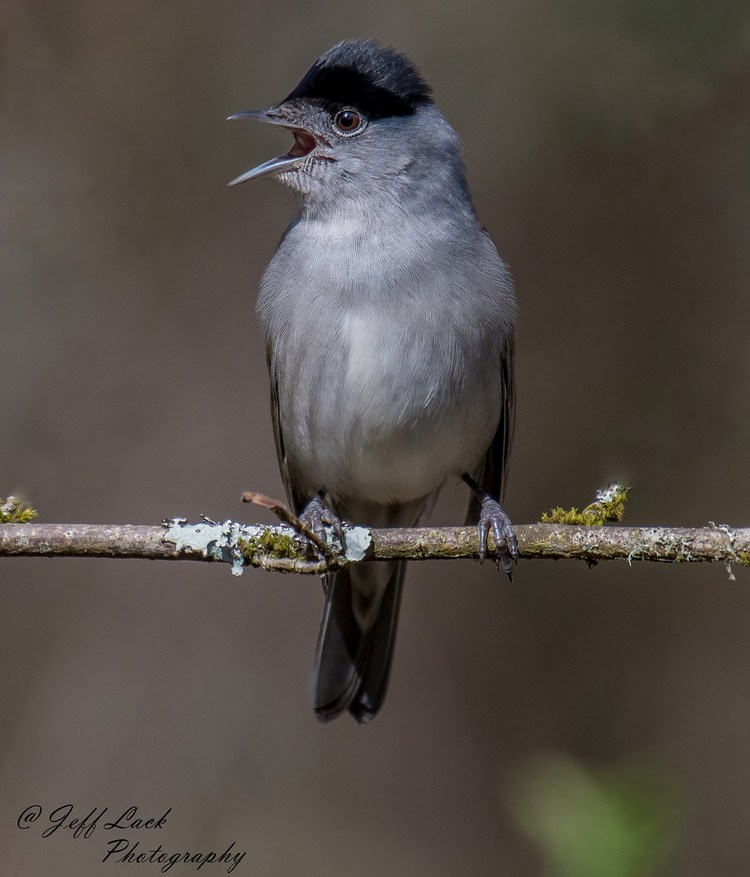 Blackcap - Sylvia Atrcapilla (M) The Eurasian blackcap (Sylvia atricapilla) usually known simply as the blackcap, is a common and widespread typical warbler. It has mainly olive-grey upperparts and pale grey underparts, and differences between the five subspecies are small. Both sexes have a neat coloured cap to the head, black in the male and reddish-brown in the female. The male's typical song is a rich musical warbling, often ending in a loud high-pitched crescendo, but a simpler song is given in some isolated areas, such as valleys in the Alps. The blackcap's closest relative is the garden warbler, which looks quite different but has a similar song. The blackcap feeds mainly on insects during the breeding season, then switches to fruit in late summer, the change being triggered by an internal biological rhythm. When migrants arrive on their territories they initially take berries, pollen and nectar if there are insufficient insects available, then soon switch to their preferred diet. They mainly pick prey off foliage and twigs, but may occasionally hover, flycatch or feed on the ground. Blackcaps eat a wide range of invertebrate prey, although aphids are particularly important early in the season, and flies, beetles and caterpillars are also taken in large numbers. Small snails are swallowed whole, since the shell is a source of calcium for the bird's eggs. Chicks are mainly fed soft-bodied insects, fruit only being provided if invertebrates are scarce. In July, the diet switches increasingly to fruit. The protein needed for egg-laying and for the chicks to grow is replaced by fruit sugar which helps the birds to fatten for migration. Aphids are still taken while they are available, since they often contain sugars from the plant sap on which they feed. Blackcaps eat a wide range of small fruit, and squeeze out any seeds on a branch before consuming the pulp. This technique makes them an important propagator of mistletoe. The mistle thrush, which also favours that plant, is less beneficial since it tends to crush the seeds. Although any suitable fruit may be eaten, some have seasonal or local importance; elder makes up a large proportion of the diet of northern birds preparing for migration, and energy-rich olives and lentisc are favoured by blackcaps wintering in the Mediterranean. The German birds wintering in British gardens rely on provided food, and the major items are bread and fat, each making up around 20% of the diet; one bird survived the whole winter eating only Christmas cake. Fruit is also eaten, notably cotoneaster (41% of the fruit consumed), ivy and honeysuckle, and apple if available. Some birds have learned to take peanuts from feeders. Blackcaps defend good winter food sources in the wild, and at garden feeding stations they repel competitors as large as starlings and blackbirds. Birds occasionally become tame enough to feed from the hand. Aristotle, in his History of Animals, considered that the garden warbler eventually metamorphosed into a blackcap. The blackcap's song has led to it being described as the mock nightingale or country nightingale. Verga's 1871 novel Storia di una capinera, according to its author, was inspired by a story of a blackcap trapped and caged by children. The bird, silent and pining for its lost freedom, eventually dies. In the book, a nun evacuated from her convent by cholera falls in love with a family friend, only to have to return to her confinement when the disease wanes. The novel was adapted as films of the same name in 1917, 1943 and 1993. The last version was directed by Franco Zeffirelli, and its English-language version was retitled as Sparrow. In Saint François d'Assise, an opera by Messiaen, the orchestration is based on bird song. St Francis himself is represented by the blackcap. Folk names for the blackcap often refer to its most obvious plumage feature (black-headed peggy, King Harry black cap and coal hoodie) or to its song, as in the nightingale names above. Other old names are based on its choice of nesting material (Jack Straw, hay bird, hay chat and hay Jack). There is a tradition of the Royal Navy's Fleet Air Arm bases being named for birds. A former base near Stretton in Cheshire was called HMS Blackcap. Population: UK breeding: 1,200,000 territories UK wintering: 3,000 birds

This Children In Need 2022 - dsc8228-blackcap on net.photos image has 875x1023 pixels (original) and is uploaded to . The image size is 127472 byte. If you have a problem about intellectual property, child pornography or immature images with any of these pictures, please send report email to a webmaster at , to remove it from web.