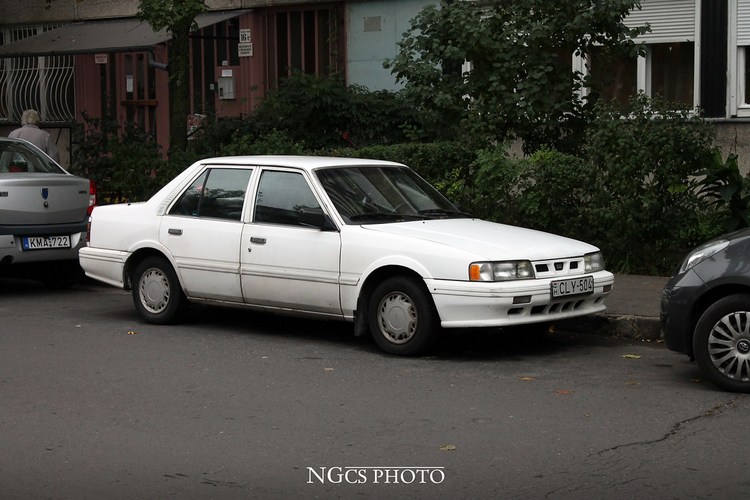 One of the ex-secret services vehicles of Hungary. As the Hungarian article linked below speculates, they may have been used for following suspects who could not identify the Kias (which were not sold commercially in Hungary at the time), but that perhaps is just a fun story. The secret service did also use Hyundai Ponys and Daewoo Racers some years after the regime change when non-USSR brands appeared in Hungary. Of course, Western marques were preferred by the public as South Korean products were considered dubious because of their obscurity. As I did a search online, I found that there is one other Capital for sale in Hungary for 250 Euros uploaded 4 days ago. Can be exchanged for an LCD TV :) URL: www.jofogas.hu/pest/Kia_Capital_elado_vagy_TV_re_cserelhe... Anyone in need of an ultra rare, ultra obscure oddity with a strange past, here's the chance :) Judging by the plate, it was probably also part of the secret service fleet. "I'd buy that for a dollar!" This car was based on the platform of the 1982 - 1987 Mazda 626 and it was produced in South Korea from 1987 to 1995, with the grille facelifted in 1994 June (as seen on this photo). Hungarian article: belsoseg.blog.hu/2015/01/08/tudjak_mi_ez_pedig_nagyon_sot... 01.11.2015: Updated ad's link

This Cars for sale online - 1994-kia-capital-1-5-glx on net.photos image has 1024x683 pixels (original) and is uploaded to . The image size is 185665 byte. If you have a problem about intellectual property, child pornography or immature images with any of these pictures, please send report email to a webmaster at , to remove it from web.