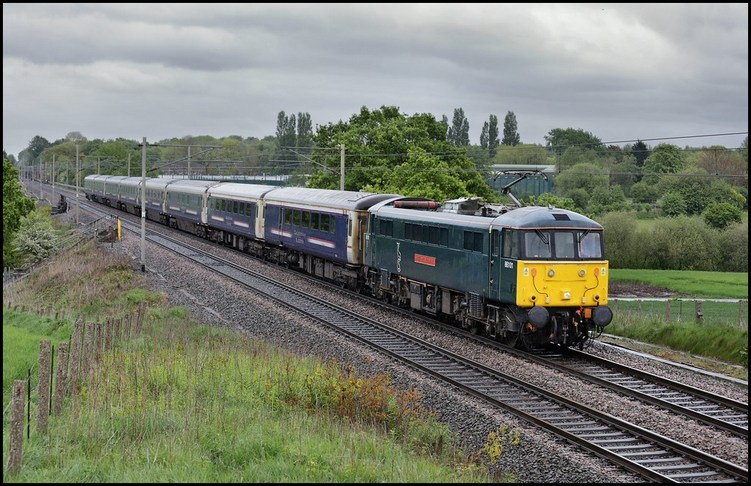 A rare chance to capture the Caledonian Sleeper 'Coffins' in daylight hauled by venerable 86101 'Sir William Stanier FRS' occurred today. I believe (stand corrected on this) the Inverness portion behind 67007 sat down and the rescue loco had to go for fuel making everything mega late. News came through early afternoon (thanks RF100) that the stock was on the move ecs from Polmadie to Wembley. * A fact not generally known is that the nameplates actually belong to the Locomotive Club of Great Britain (North West Branch) with the agreement with owner Portersbrook that if the loco is sold or scrapped then the plates will be removed and returned. My recently deceased friend Eddie Bellass was LCGB NW Chairman at the time and along with fellow committee members came up with the idea to finance the plates as the Branch had surplus funds in the bank as result of running scores of successful Railtours. Also it was an era when the branch had connections in high places on the BR Board, an era when it was 'good to talk' … remember that? So in May 1978 86101 was named at Liverpool Lime Street station. There are pictures of the event somewhere, will try to locate.

This Cars On Finance Liverpool - red-bank-gbrf-86101-sir-william-stanier-frs-5z16-12-10-polamdie-car-m-d-wembley-inter-city-depot-09-05-19- on net.photos image has 1024x663 pixels (original) and is uploaded to . The image size is 233529 byte. If you have a problem about intellectual property, child pornography or immature images with any of these pictures, please send report email to a webmaster at , to remove it from web.