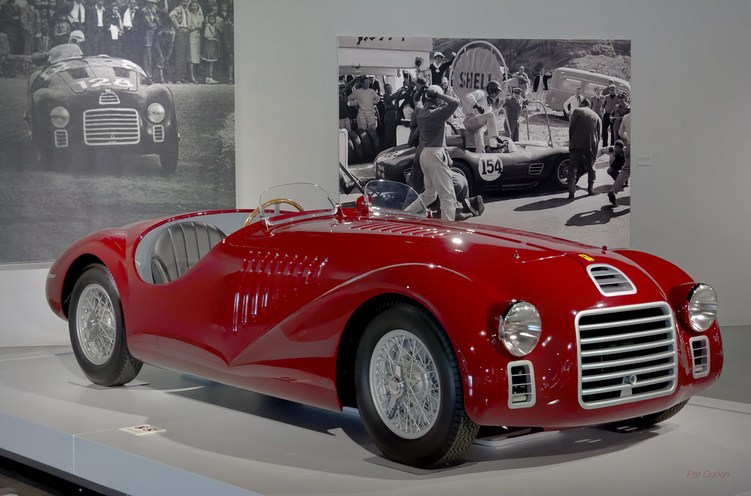 Petersen Automotive Museum - Los Angeles, CA A very lightweight car with a welded steel tube chassis and aluminum body, with a naturally aspirated 91 cubic inch V-12 engine. After World War II, Enzo Ferrari rebuilt his Maranello workshop, which had been leveled by Allied bombs. Because obtaining financing was so difficult at the time, he was forced to sell personal items to fund the production of the first car to bear his name. Dubbed the 125 S, it was also the first vehicle he equipped with the now-famous V-12 engine. It did not finish the 1947 Piacenza Circuit race, its first ever, but Enzo Ferrari was undaunted and went on to claim victory 3 weeks later at the Rome Grand Prix held at Terme di Caracalla circuit shortly thereafter. Top Speed: 130 MPH Horsepower: 118 Engine: 1-1/2 Liter V-12 Number Built: 2 (125 S's) The 125 S was driven by Franco Cortese during its debut at the Piacenza Circuit in 1947. Collection of Roger Willbanks PLEASE VIEW LARGE

This Cars On Finance - 1947-ferrari-125-s-barchetta-spyder-front-right-3-4 on net.photos image has 1023x676 pixels (original) and is uploaded to . The image size is 158139 byte. If you have a problem about intellectual property, child pornography or immature images with any of these pictures, please send report email to a webmaster at , to remove it from web.