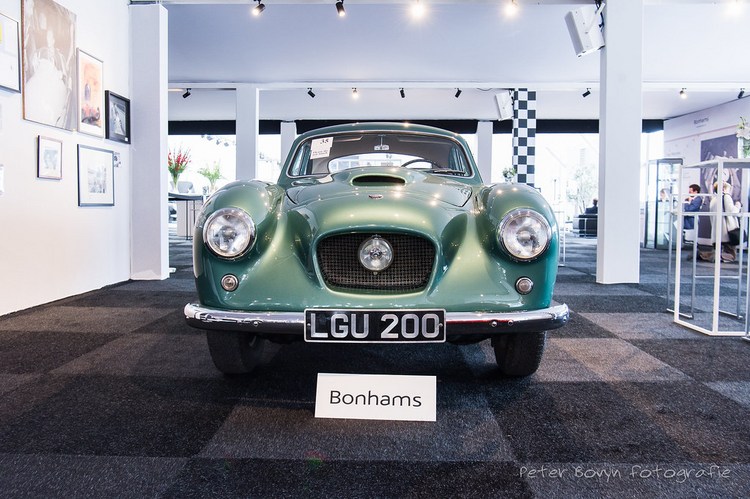 Chassis n° 404/2030 Bonhams : the Zoute Sale Estimated : € 230.000 - 260.000 Zoute Grand Prix 2018 Knokke - Zoute België - Belgium October 2018 Imitation is said to be the sincerest form of flattery; nevertheless it seems unlikely that BMW's engineers felt particularly gratified when the Bristol Car Company obtained the rights to their automotive designs as part of Germany's post-WW2 reparations. Thus it came about that the Bristol 400, which commenced production in 1947, was effectively a synthesis of three pre-war BMW designs, with a chassis derived from that of the 326, an engine from the 328 sports car, and an aerodynamic bodyshell similar to that of the 327 coupé. But Bristol did more than simply copy the work of its German counterparts; the application of aviation industry standards to its manufacture resulted in a car more refined and considerably better constructed than its Teutonic forbears. With the 1953 introduction of the short-wheelbase 404 coupé, the Bristol line at last lost its resemblance to the pre-war BMW, swapping that distinctive two-piece radiator grille for an equally unmistakable, aeronautically inspired air intake. The body was still an ash-framed, aluminium-alloy panelled structure, but the bonnet was now forward-hinging and for the first time the spare wheel was accommodated in the near-side front wing. Bristol continued to use the BMW-based, 2.0-litre, six-cylinder engine with its ingeniously arranged, pushrod-operated inclined valves, and this was available in either 105bhp or 125bhp form in the 404. The gearbox remained a manual four-speed unit with first-gear freewheel. Famously dubbed the 'Businessman's Express', the 404 excelled at providing high-speed travel in comfort -the very definition of 'Gran Turismo'. The car's aircraft-industry standard of construction did not come cheap however, and only 52 examples found customers between 1953 and 1955. Its accompanying Bristol Heritage Certificate confirms that this 404 was supplied new on 15th October 1954 to Mr Remy Mannes, the then Bristol dealer in Brussels, Belgium. The car was supplied in left-hand drive configuration for Europe with a rare km/h speedometer, green leather interior, and European dipping, all of which it retains today. The engine number quoted on the certificate is '100B/3534', whereas today a more desirable and later type B2 engine ('100B2/4070') is fitted. The car's original exterior colour is listed as black. Mannes had ordered this 404 for a client from Antwerp. Related documents on file include a copy of the original order from Établissements Remy Mannes to 'The Bristol Aeroplane Company Limited'; a copy of the sales invoice; copies of all transport papers; and some hand-written notes. In July 1968, the Bristol returned to the UK having been purchased by one Michael Beardmore, and was registered in the UK with the number 'LGU 200', which it still carries today. The car was sold again in the early 1970s to a Mr Bradburn, who sold it and bought it back again in 1982 (see correspondence on file dated 1982). While in his ownership, 'LGU 200' was featured in an article in Thoroughbred & Classic Cars' June 1983 edition (article on file). The Bristol moved to Oslo, Norway in 1985 (old title on file), returning to the UK in 1989. The previous owner registered the car in 1989 and the last owner in 2008. Today, 'LGU 200' is presented in lovely condition, with its believed original and well-preserved interior possessing a beautiful patina.

This Cars For Sale Bristol - bristol-404-coup-1954 on net.photos image has 1023x681 pixels (original) and is uploaded to . The image size is 226304 byte. If you have a problem about intellectual property, child pornography or immature images with any of these pictures, please send report email to a webmaster at , to remove it from web.