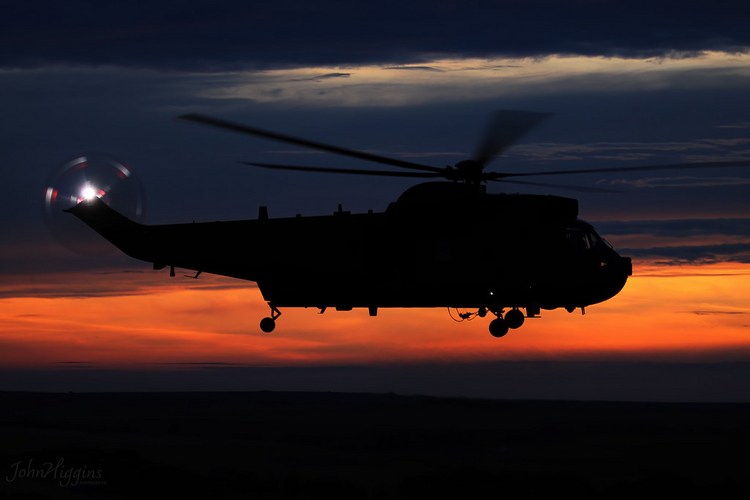 ZB507/F Westland Sea King HC.4, Junglie, 845 Naval Air Squadron, RNAS Yeovilton, Royal Navy . During 2010, I was contracting down at Staverton airport, in July of that year, one of the Pashtun exercises was taking place on the Salisbury Plain Training Area (SPTA), Pasthun Jaguar maybe? As per the previous few exercises, a Forward Refuelling Point (FRP) had been created just outside the airfield boundary at Netheravon. This was for the forthcoming Op Herrick 13 deployment to Afghanistan, so Netheravon had, Merlins, Junglies, Chinooks, Lynx and Apaches all present. I drove down after work, it was a glorious evening, however, true to form, as I got closer to the SPTA, broken clouds came rolling in, once parked up, I joined several of the usual suspects who were already there. It was quite busy, with a pair of RAF Merlin HC.3’s and a couple of AAC Lynx AH.9’s using the FRP, a few times, so some decent shots were to be had. Due to my late arrival, I had missed all the Apache and Chinook action. As the light faded, the two Merlins came into the FRP again, we bagged some really nice sunset lift off shots of one of the Merlins in particular, content with that, we all trudged back to the cars, happy with the evenings trade, not a bad way to spend a couple of hours after work. To be fair, we had pretty much lost the light by this time, there was some activity around the helicopters on the airfield, but not much seemed to be happening, certainly on the FRP at least. Just as we got back to the cars, the pair of Sea King HC.4 Junglies that had been parked up all evening, departed Netheravon to the west, I had kept the scanner on, they landed somewhere around the Larkhill area, one of the areas being used to simulate an Afghan compound, for the purpose of the Exercise, we assumed they would carry on to the west, to our surprise the call came though on the scanner, Renegade 1+2, pair of Junglies, inbound to the FRP. Cue the wacky races run back to the FRP, we managed to get back into position just as the Junglies were on finals. The light really had all but gone by this time, however, the departure shot of Renegade 1, lifting off from the FRP, passing right through a lovely band of orange light, underneath a bank of cloud on the horizon, where the sun had recently set, was a real bonus and probably the winner of shot of the evening. This image was taken just before 22:00hrs, as Renegade 1 lifted off the FRP, making its way back across the road to the airfield. It just goes to show you, it ain’t over and all that.

This Cars 2 Training - zb507-sea-king-hc-4-spta-sunset-080710a on net.photos image has 1024x683 pixels (original) and is uploaded to . The image size is 69198 byte. If you have a problem about intellectual property, child pornography or immature images with any of these pictures, please send report email to a webmaster at , to remove it from web.