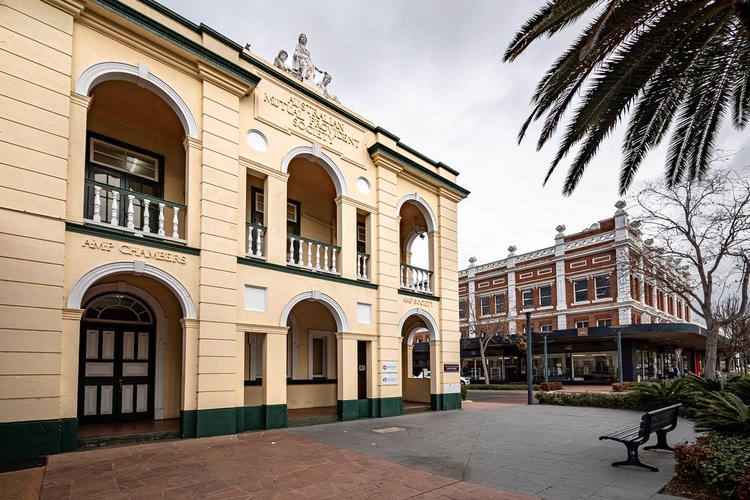 The former Barnes & Co department store, now housing Smith and Miller furniture showroom, situated on the corner of Palmerin and King Streets, Warwick, was constructed in 1910 - 1911 to designs of local Warwick architects, Wallace and Gibson. The building was described in contemporary reports as a trade palace and was, in fact, a department store. Department stores became popular in England during the mid nineteenth century, assuming the popularity arcades formerly held for would-be purchasers. The new stores were large scale buildings, usually multi-levelled, with impressive architectural edifices raising them to the standards of public monuments. By the First World War the department store flourished as a middle class institution where shoppers were less intimidated and offered a wider variety of goods than were available in traditional exclusive shops. Barnes & Co in Warwick was typical of many of the early Australian department stores. The company which was known under various names had been merchants in Warwick since 1874 and, in the tradition of many other large stores, considerable expansion and rebuilding occurred resulting in the 1911 building extant today. George Powell Barnes who founded Barnes & Co, was born in 1856 in Castlemaine, Victoria. He was educated in Queensland when his father, a driver employed by Cobb & Co established the Brisbane-Gympie-Maryborough run. George worked as a cashier in various stores in regional Queensland before moving to Warwick in 1878 and opening a store. Early stores on the Darling Downs were a necessity to the farmers; their isolation made contact with potential buyers difficult and stores were able to act as middlemen and ensure the disposal of goods and produce. A company started in 1880 by George Barnes in association with his brother, Walter Henry Barnes and Mr TF Merry was known as Barnes and Company Limited. Merry was a storekeeper in Toowoomba, with whom George worked earlier and whose daughter, Mary Cecelia was married to George in 1879. Barnes and Co was formed to control businesses in Warwick, Allora, Yangan and Roma Street and Commonwealth Flour Mills at Warwick and South Brisbane. In 1898 Messrs Wallace & Gibson, local Warwick architects, called tenders for the erection of a business premises located at the corner of Palmerin and Fitzroy streets for Messrs Barnes & Co. This stone building, used as the registered offices of the firm, was constructed on land several blocks to the north of the site of the 1911 Barnes & Co building, and was known as the Emporium. A 1901 description of the business describe Barnes & Co Ltd as general merchants, having departments specially devoted to general drapery, millinery, dressmaking, groceries, crockery, and glassware, furniture, boots and shoes, ironmongery, farmers' produce and agricultural machinery. Another building owned by the firm, in another part of Palmerin Street, was known as the Exchange and was devoted to the selling of agricultural machinery. As before mentioned Barnes & Co were the proprietors of the Commonwealth Flour Mill, located in Wantley Street, Warwick. This was a complex of brick buildings used for the storage of wheat. The culmination of the Barnes & Co expansion was the opening of their trade palace at the corner of Palmerin and King Streets. The land on which the building stands was acquired by Deed of Grant by William Brown on 23 November 1860 and had many owners until 23 March 1907 when George Powell Barnes bought the site for his new trade palace. The building was constructed by contractor, Mr M Ivory and cost £9000. When constructed the building was featured in a lengthy report of the Warwick Examiner and Times and described as a distinct and unassailable illustration of the progress and wealth of Warwick and the rich agricultural and grazing belt surrounding it. The store was a large addition to Warwick in 1911, and of not inconsiderable architectural pretension. Externally, well composed facades of tuck pointed brickwork and plaster pilasters and cornices contribute to the quality of the design of the building and this is re-inforced by the internal finishes and detailing including the Wunderlich ceiling, timber joinery and plate glass. A Lamson pneumatic railway system was installed to connect with tubing nineteen points of sale with a cash office at the rear of the store, through which cash and documents could be moved around the building quickly. Particular attention was given to internal lighting, with Webb & Weston electrical and mechanical engineers consulting on the installation of an electric generator, for lighting and general power. The roof was pierced with several skylights. Internally the plastered walls were kalsomined. The interior of the former Barnes & Co store seems to have been divided into several smaller departments and a small note in the opening description describes wooden partitions as painted. The ground floor of the shop, with a total of 370 feet of plate glass frontage to King and Palmerin Streets, was devoted to various departments, including menswear on the corner of the streets, haberdashery, manchester, furnishing, grocery and crockery and dress departments along the King Street facade and the boot and furniture departments along Palmerin Street. In the upper floor of the store was the ladies' underwear department, the dressmaking and fitting rooms and a staff luncheon room. The property passed out of the Barnes family in the late 1950s and has been used since that time by various commercial outlets. Source: Queensland Heritage Register.

This Business Name Generator - australian-mutual-provident-society-barnes-and-co-trading-place-warwick-queenslands-southern-downs- on net.photos image has 1024x683 pixels (original) and is uploaded to . The image size is 264086 byte. If you have a problem about intellectual property, child pornography or immature images with any of these pictures, please send report email to a webmaster at , to remove it from web.